An Anchorage woman was attacked on the street by a stranger. She says another stranger stepped in and saved her life. 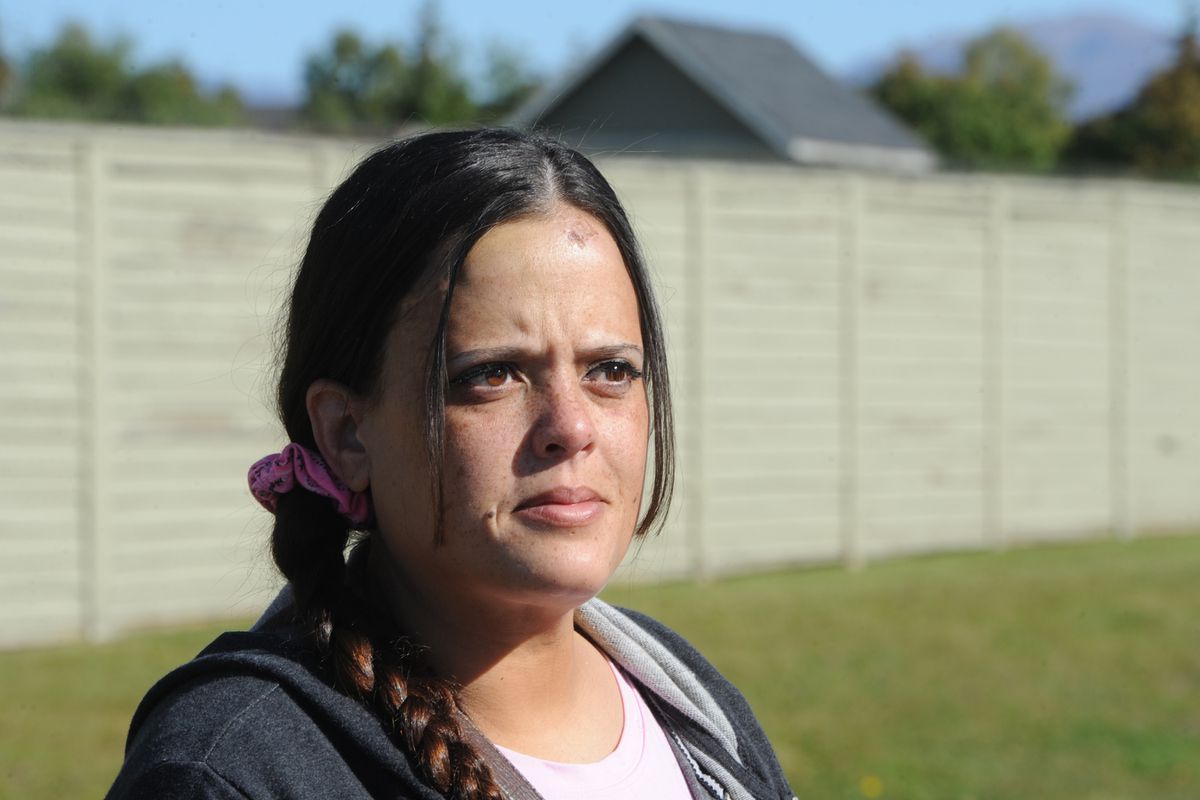 Mikka Thomas was recently attacked in Fairview by a man wielding a rock. She fought and screamed, and a neighbor, Shaun Sullivan, heard her. Sullivan got out of bed, chased the assailant and held him until police arrived. (Bill Roth / ADN)

Mikka Thomas was recently attacked in Fairview by a man wielding a rock. She fought and screamed, and a neighbor, Shaun Sullivan, heard her. Sullivan got out of bed, chased the assailant and held him until police arrived. (Bill Roth / ADN)

Mikka Thomas had run out of cigarettes.

So the 39-year-old decided to walk to a gas station, several blocks away from her home near downtown Anchorage.

It was early on the morning of Sept. 6, dark out. She’d never felt unsafe walking at night in Anchorage.

Thomas was almost home when something made her pause and turn around.

A stranger holding a rock was standing behind her, so close his toes were nearly on her heels. She remembers saying something like “please don’t” to the man.

“I already knew he was going to hurt me," Thomas said.

The next thing she knew, he was bashing her in the head with the rock. It was about the size and shape as half of a cantaloupe.

Every time he hit her, she felt a flash of light. Thomas focused on continuing to make noise. She thought it might be her only chance to attract attention and escape.

“I was screaming for help, screaming that he was trying to kill me,” she said.

Just as she felt herself slipping into unconsciousness, Thomas heard a voice from the house across the street.

It was Shaun Sullivan, another Anchorage stranger. He was about to save her life.

Sullivan, 39, who was most recently employed by the U.S. Census, had been asleep in his house near 14th Avenue and B Street when he heard a panicked voice from the street.

“Please help me!” Thomas was screaming.

He looked out a window to see what appeared to be a man standing over a woman, hitting her.

Sullivan burst out of his house wearing boxer shorts. He tried to get his dog Dusty — “more of a ball and frisbee dog,” he said — to attack.

The man, startled, got off Thomas and lurched away. Sullivan tackled him, holding him until police arrived a few minutes later.

His partner Joannie Miller tended to Thomas, who sat dazed and bloodied on the asphalt.

The charging document in the criminal case says Donhauser-Sagmoen followed Thomas and attacked her. It says nothing about a motive.

“Officers contacted Erik and noted that he appeared under the influence of drugs,” the criminal complaint against Donhauser-Sagmoen reads.

At the hospital, Thomas was told she was lucky not to have suffered a skull fracture or brain damage. She needed stitches for the deep laceration to her forehead.

Thomas, who is self-employed as a residential cleaner and has lived between Anchorage and Texas for most of her life, returned home shaken, trying to make sense of becoming the target of seemingly random violence.

The most chilling part of the attack is that Donhauser-Sagmoen never said a word, Thomas said.

Donhauser-Sagmoen has an extensive criminal history, with 18 convictions for crimes ranging from burglary to DUI to vehicle theft, going back to 2010, according to the criminal complaint.

Thomas did some Googling. She found a 2018 Alaska Star article about a family in Chugiak who’d returned from a trip to Seward to find their home burglarized. They then discovered disturbing home surveillance video of a man walking up their driveway with a rifle. Donhauser-Sagmoen had been charged in that case too.

“I feel like he should never have been in a position to do this to me,” she said.

She posted a picture of her bloodied face in the ER on social media. Her story of being violently attacked by a stranger circulated rapidly online. Blogs and a TV station picked it up. She did an interview on a radio talk show.

A few days later, an Anchorage magistrate judge set bail terms of $3,000 performance bond, plus electronic monitoring, for Donhauser-Sagmoen, according to online court records. Thomas was astonished by what she sees as a low bail amount.

As of Monday, Donhauser-Sagmoen remained in jail.

“The tragedy I see”

The question hanging over the incident remains: Why?

She used to feel safe in Anchorage, but not now. She’s been having panic attacks. If Sullivan hadn’t intervened, what would have happened?

“The way he was hitting me, he did not want me to make it out of there.”

Sullivan doesn’t know why Donhauser-Sagmoen, who could not be reached for this article, attacked a woman.

He can only speculate based on what he gathered from Donhauser-Sagmoen’s criminal history, and the brief minutes when he had him in a headlock, waiting for the police to arrive. He felt Donhauser-Sagmoen go limp in his arms, which he recognized as a common trauma response.

Pairing that with a criminal record that stretches deep into his teenage years, Sullivan sees “a person that fell through the cracks of the system from a very early age,” he said.

“That’s the tragedy I see,” he said. “This could have prevented two decades ago.”

Despite the ugliness that brought them together, both Thomas and Sullivan feel like a new friendship is forming.

Thomas decided she needed to meet the man who chased off her attacker in daylight. The day after the attack, she walked over to Sullivan’s house with her friend and bags of hamburgers and fries. They couldn’t hug because of COVID, so they stood on a porch at a distance.

Sullivan says that’s not true. By screaming by help, Thomas saved herself.