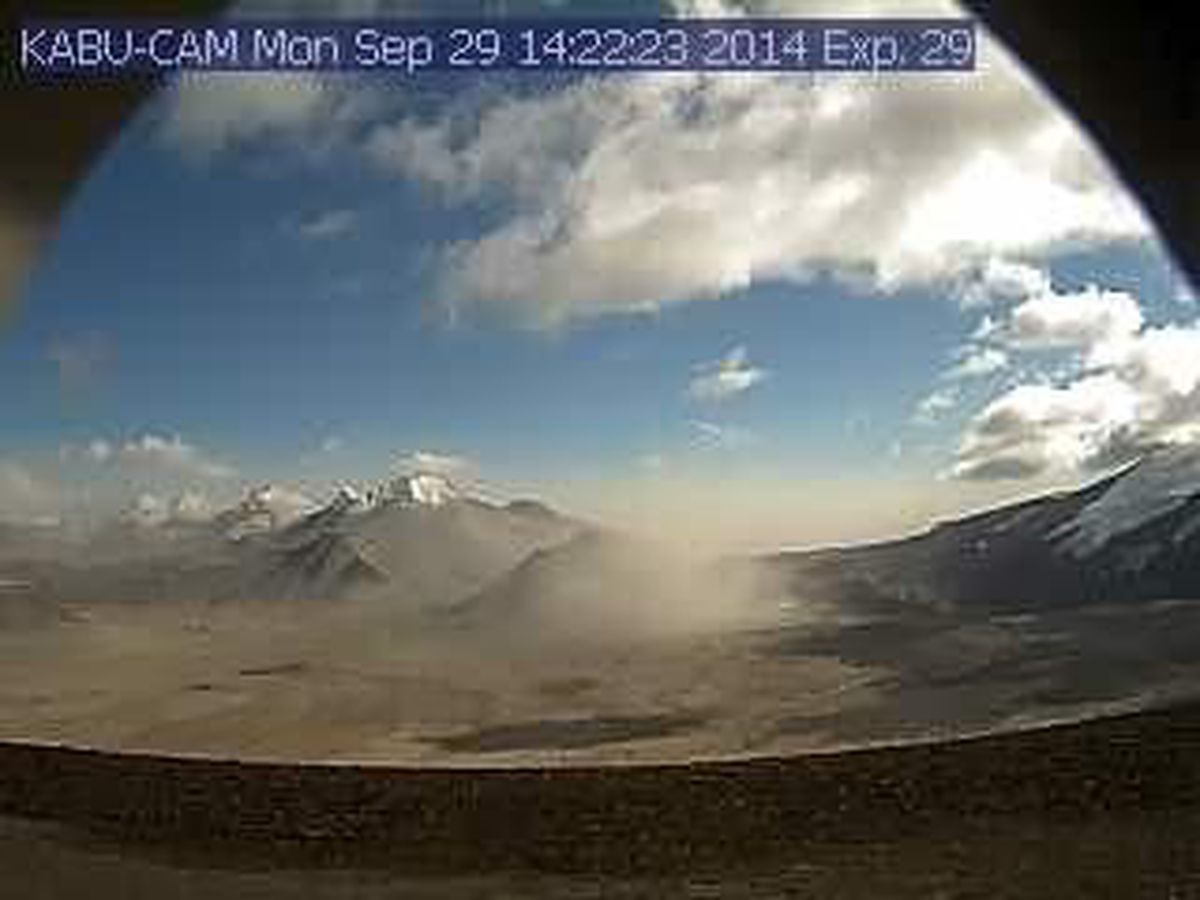 This 2014 photo shows resuspended 1912 Novarupta/Katmai ash, as seen from a webcam in the Valley of Ten Thousand Smokes in Katmai National Park and Preserve in Alaska. (Alaska Volcano Observatory/U.S. Geological Survey via AP)

This 2014 photo shows resuspended 1912 Novarupta/Katmai ash, as seen from a webcam in the Valley of Ten Thousand Smokes in Katmai National Park and Preserve in Alaska. (Alaska Volcano Observatory/U.S. Geological Survey via AP)

Southwest Alaska this week was dealing with an air quality problem born a century ago.

Strong southerly winds picked up loose ash from a 1912 volcanic eruption, sending an ash cloud about 4,000 feet into the sky on Monday.

There were no reports of ashfall in nearby communities near Katmai National Park, famous as the location where brown bears stand in the Brooks River and catch salmon, but pilots were warned about the cloud because the ash can stall engines.

“Basically these sorts of events happen every spring and fall when strong winds pick up ash from the 1912 Novarupta eruption,” said Kristi Wallace, a U.S. Geological Survey geologist at the Alaska Volcano Observatory.

The three-day eruption, one of the world’s largest, began June 6, 1912, and sent ash as high as 100,000 feet above the Katmai region, located about 250 miles southwest of Anchorage. The USGS estimates 3.6 cubic miles of magma was erupted, about 30 times what spewed from Mount St. Helens in Washington state 40 years ago.

The Novarupta eruption was the most powerful of the 20th century and ranks among the largest in recorded history.

The ash was deposited in what is now known as the Valley of Ten Thousand Smokes. “Just about 600 feet of ash out there that’s not vegetated,” Wallace said.

That was confirmed by a pilot flying at about 2,000 feet.

The observatory issued a statement alerting people that this was not a new eruption from one of the seven volcanos in the Katmai region, but just high winds kicking up the Novarupta ash.

“We know that what’s getting kicked up isn’t just glacial dust, mineral dust that you can see pretty much everywhere else in Alaska,” Wallace said. “These kinds of dust storms happen everywhere. But when they happen there, we know that the material that’s being picked up is predominantly volcanic ash.”

The winds were only about 30 mph, said Michael Kutz, a meteorologist at the National Weather Service office in Anchorage. The cloud moved north from the Katmai region, and they had no reports of ashfall.