'Taxing in every way’: After 23 days and almost 100 interviews, search goes on for missing Nome woman 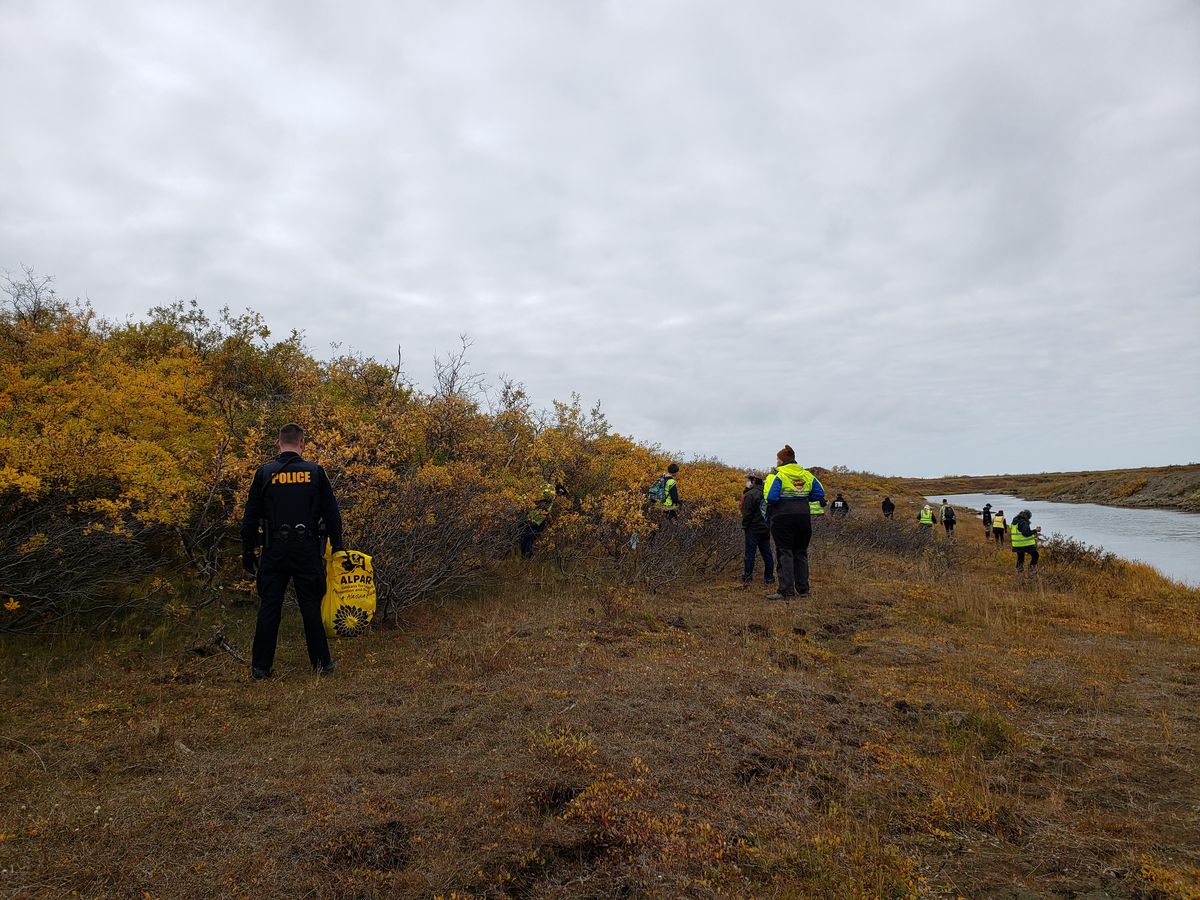 About 40 people spent more than three hours combing heavy brush around Nome Saturday, Sept. 12 2020 as part of the search for Florence Okpealuk, reported missing Aug. 31. Searches continue, but officials say they've still got no leads. (Photo from the Federal Bureau of Investigation)

About 40 people spent more than three hours combing heavy brush around Nome Saturday, Sept. 12 2020 as part of the search for Florence Okpealuk, reported missing Aug. 31. Searches continue, but officials say they've still got no leads. (Photo from the Federal Bureau of Investigation)

The last anyone in Nome reported seeing Florence Okpealuk was early on Aug. 30 when she was spotted at a tent in an area near town known as West Beach.

Her family reported Okpealuk missing the next day. The city enlisted the FBI’s help the morning of Sept. 3.

Now, more than three weeks after she vanished, there’s still no sign of the 33-year-old with a young daughter.

Law enforcement officials have conducted nearly 100 interviews with family, friends and community members, according to an update released Tuesday afternoon by Nome police. They have also reviewed closed circuit television footage from more than a dozen locations within a several-mile radius of Okpealuk’s last known location.

New search volunteers arrived in Nome from Savoonga and Brevig Mission this week. As new volunteers arrive — and community members continue to go out on their own — Nome’s volunteer fire chief says he has plenty of search assets but fewer good leads to point them to Okpealuk’s location.

“Not having a good lead is not good, because the countryside is just so vast,” said Chief Jim West Jr., who heads the Nome search and rescue team and spent several minutes Tuesday morning just listing the different search efforts. “So far it’s come up with nothing. It’s frustrating.”

West’s efforts are separate from the ongoing investigation into Okpealuk’s disappearance by the Nome Police Department and FBI.

There has been little public information about that side of the search. Authorities issued an alert earlier this month asking for information about a pickup truck captured by cameras on the waterfront, but later said they’d found the truck and spoken with the driver without providing any additional details.

Six FBI agents came to Nome for about a week to help with the case before returning to Anchorage Sept. 16. The agency isn’t usually contacted by local police so early in a missing persons investigation, according to Supervisory FBI Agent William Walton.

Asked if authorities have found any evidence of foul play, Walton said the investigation is focused on the circumstances surrounding Okpealuk’s disappearance.

“We don’t prejudge those circumstances,” he said.

Searches continue daily, with 15 or 20 volunteers, according to Billi Jean Miller, who grew up in nearby Teller with Okpealuk.

A group going out midday Tuesday included three Savoonga divers who planned to check the water near a gold-mining dredge, she said. Brevig Mission volunteers planned to take four-wheelers to the Cripple Creek Gold Mine then walk back to Nome along the brushline.

Miller became friends with Okpealuk when they played basketball together at Teller High School. She described her as a kind, vibrant person who made you feel recognized when she said hello.

Miller, who posts regular search updates on Facebook and mounted letter-writing campaigns for volunteers and donations, said she sees Okpealuk’s family members searching every day and can only imagine what they’re going through as the search and rescue transitions to search and recovery.

“That takes a lot of mental preparation,” she said. “It’s taxing in every way.”

Bering Air is covering the transportation costs for volunteers, a representative of the Nome-based air service said this week. They flew four divers from Savoonga on Monday.

More air searches are planned once the leaves drop off the thicket of willows, making it easier to see the ground, West said.

There’s been some criticism in the community that local officials didn’t do enough, quickly enough, to start looking for Okpealuk. Testimony at a Nome City Council meeting last week included requests the city make a point to include a public safety commission formed last year, according to a report in The Nome Nugget.

Melanie Bahnke, president and CEO of Nome-based regional nonprofit Kawerak Inc., said she was encouraged by the response when she contacted Nome’s city manager after Okpealuk went missing to see if the city wanted help bringing in FBI resources.

The city had already engaged them, she said.

“Everyone wants her to be found,” Bahnke said.