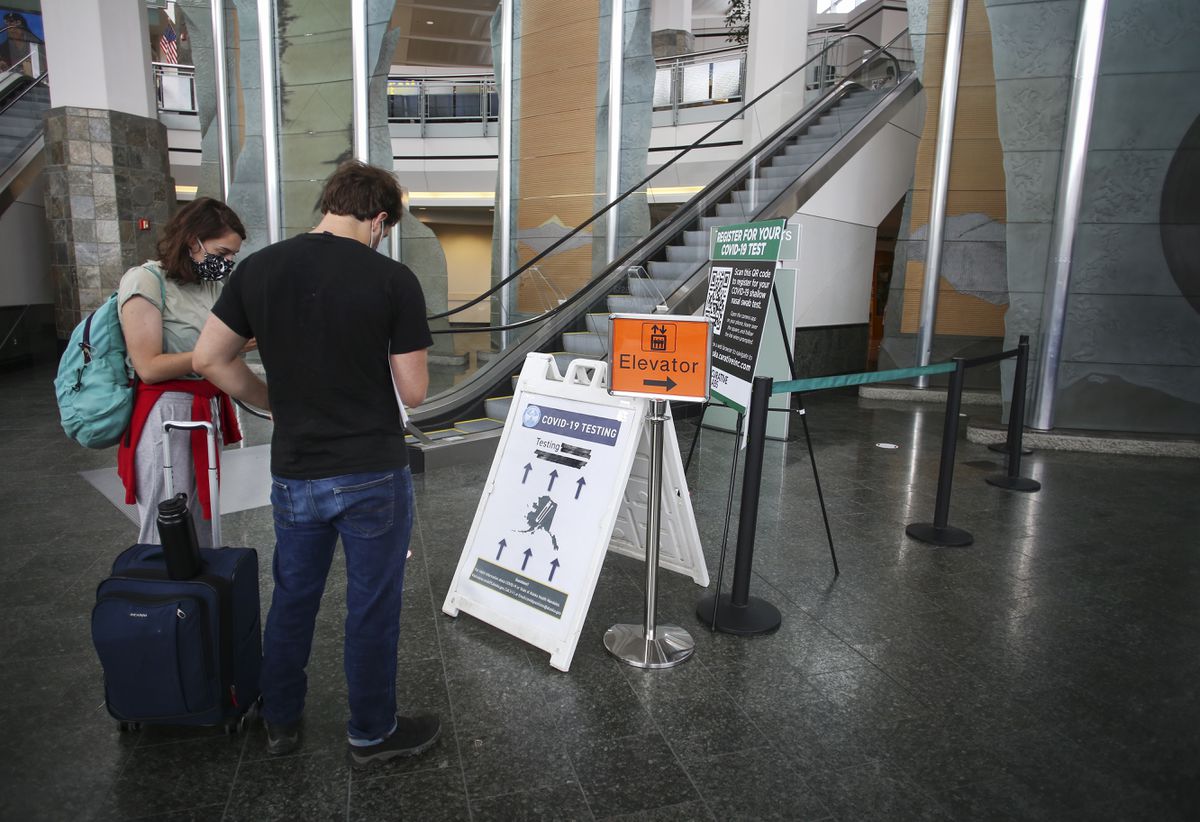 The influx of outsiders brought new risks of the spread of COVID-19 to a state that had so far escaped the deadly surges overfilling emergency rooms in other places.

Daily coronavirus case counts for people from out of state, dubbed “nonresidents" in state data, rose quickly by July. On some days, they accounted for a quarter or a third of all the new reported infections.

Now the number of out-of-state workers and visitors with confirmed COVID-19 cases has dropped to zero some days, single digits most others.

The reason is pretty simple.

By early September, the tourists and thousands of fishing industry workers who made up the bulk of Alaska’s nonresident population all but disappeared.

“We’re sort of in a shoulder season in Alaska. I hate to say it but summer is kind of over and winter hasn’t really started,” Coleman Cutchins, a clinical pharmacist at the state’s Department of Health and Social Services, said Thursday. “The industries that tend to bring in a lot of nonresidents into the state aren’t bringing people into the state right now. They’re sending people out of the state, if anything.”

The summer influx of nonresidents resulted in only a few known incidents where out-of-state visitors led to outbreaks among local residents, state health officials said this month. They couldn’t point to any known links between seafood workers and community spread, though it’s possible that’s due to the limitations of contact tracing.

State officials at a media briefing earlier this month could only recall a few cases where visitors spread the virus to people here.

In one contact investigation, a contagious traveler infected some people they came to visit in Alaska, though that’s more of a secondary infection rather than community spread, according to Anna Frick, a state epidemiologist. Frick also mentioned an outdoor barbecue that included a traveler who tested positive but also some residents who did, so it wasn’t clear who the true source was.

"People with COVID-19 can spread it to other people. All it takes is being in close proximity to other people,” McLaughlin said, adding community spread is happening now across the state. “Anybody who’s infected, whether they are a resident or they are a visitor, has the potential for transmitting the virus to others.”

The coronavirus pandemic showed up in Alaska residents in March but stayed below 20 new daily cases until June.

[Previous coverage: Thousands of fishery workers, many from outside Alaska, are headed to Bristol Bay. One tiny hospital says its coronavirus plan can’t handle them.]

Amid calls to restrict the flow of visitors and curtail COVID-19 spread, the state enacted new mandates with quarantine, screening and testing requirements for arriving seafood workers. Other mandates requiring 14-day quarantines for arriving visitors sharply curtailed the number of tourists arriving here — combined with a federal cruise ship no-sail order decimating the state’s visitor industry — before shifting to a pre-travel testing requirement that further reduced the numbers of outsiders showing up.

Even so, nonresidents started showing up in significant numbers in the state’s daily case counts. The seafood industry was associated with many: Some were workers largely without symptoms who came up positive in rounds of required testing and quarantine, while others were people involved in several large outbreaks.

The workers in the outbreaks had symptoms ranging from none to mild to moderate, an Alaska Department of Health and Social Services spokesman said. A few required hospitalization.

The outbreaks added up to hundreds of workers, including those on a factory trawler originally in Unalaska as well as at processing plants in Juneau, Seward, Kodiak and Anchorage. In some instances, the outbreaks were composed of both resident and nonresident workers.

But as summer pushed on, cases among nonresidents started to decrease sharply, from a peak of 171 cases confirmed in people from Outside in one week in late July, to just 21 cases during the first week of September — a little less than 4% of the week’s confirmed cases, with none associated among the seafood industry.

In August, the state began requiring nonresident travelers get a negative COVID-19 before coming to Alaska, or risk paying $250 for a test upon arrival. Visitors getting tested before arriving under the state’s new travel guidelines was one factor in the nonresident case decline, according to Julie Jessen at the Alaska Travel Industry Association. And even in a normal year, visitor numbers usually slow down by September.

In June and July, the portion of travelers opting for a test upon entry to the state hovered around 30% to 40%. But a state report for the week of Aug. 15 showed only 17% of travelers were getting tested when they landed and another 64% could provide proof of a negative test upon arrival.

The departure of outside workers — and with them, testing equipment — led to some unexpected consequences.

Camai Community Health Center in Naknek, where an influx of salmon industry workers descend on Bristol Bay, received a large Abbott rapid-testing machine to handle all the people who needed regular testing under state mandates, according to the center’s executive director, Mary Swain. The state at the beginning of September removed the machine and relocated it to Kodiak.

Through much of the summer, the Bristol Bay Borough escaped community spread of COVID-19 among local residents. But local cases suddenly appeared earlier this month, and the contact tracing needed to contain infections was more than the smaller machine in place now could handle.

Without the Abbott, it took 13 hours to test 54 people in one day, Swain said.

“It’s disheartening,” she said earlier this month. “Now our community needs it, and we don’t have the equipment available."

All eight Cepheid machines and some Abbott machines were sent to communities with a large presence of seafood workers, Bennett said in an email. “As the summer commercial season came to an end the testing equipment was transferred to other communities as they ramp up for the fall and winter commercial fishing seasons.”

Some workers are still coming for the fall pollock and Pacific cod fisheries. Additional new workers will start coming at the end of December and into January.

It’s not clear how many workers are coming. The health department and critical infrastructure branch of the State Emergency Operations Center have a questionnaire out to the fishing industry on the estimated forecast of workers coming into Alaska, Bennett said. Results aren’t back yet.

The state is working with the fishing industry on the lessons learned from the summer fishing season and making changes to state policies addressing COVID-19, Bennett said. Once changes are finalized, he said, they will be shared with the public.

“We’re not getting as many people coming in and those who are are most likely getting tested prior to arrival,” Cutchins said.