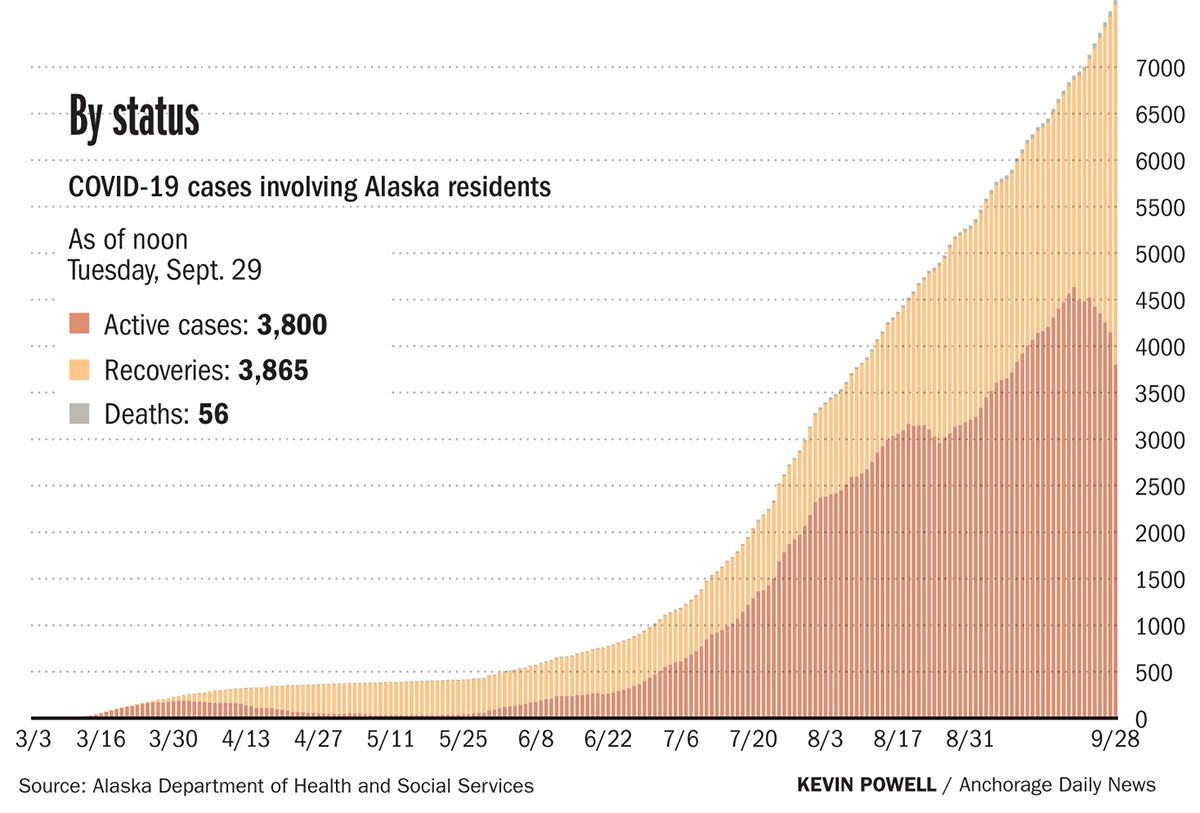 The state of Alaska on Tuesday reported 120 new coronavirus infections on the Department of Health and Social Services' COVID-19 dashboard.

No new deaths were reported, and Alaska’s death rate remains among the lowest in the country. In total, 56 Alaskans have died with the virus since the pandemic began here in March.

Active cases of COVID-19 among Alaska residents was 3,800 on Tuesday, a decrease of 348 from Monday. There were also 494 total active cases among nonresidents as of Tuesday.

Of the 118 new cases of COVID-19 involving residents, 59 were in Anchorage; 12 in Fairbanks; 11 in Wasilla; eight in Palmer; seven in Utqiagvik; six in Eagle River; two in Soldotna; two in Sitka; two in Kotzebue; one in Chugiak; one in Anchor Point; one in Valdez; and one in Ketchikan.

In Juneau — where the state reported just one new resident case Tuesday — the Emergency Operations Center announced that it is lowering the overall community risk from “high” to “moderate” due to a decrease in the overall number of virus cases there. That means bars in Juneau can now reopen for indoor service at half-capacity, though some restrictions will remain in place, including indoor gathering size limits, masking requirements in indoor public spaces and a half-capacity limit at gyms.

Among communities smaller than 1,000 not identified to protect confidentiality, the state reported two cases in the Northwest Arctic Borough; one in the Aleutians West Census Area; and one in the Bristol Bay plus Lake and Peninsula region.

There were also two new nonresident cases reported in Anchorage.

The state’s testing positivity rate as of Tuesday, which has been trending slightly upward since the beginning of the month, was 2.67% over a seven-day rolling average. The rate can include multiple tests on the same person.

Positivity rate is considered an important indicator of whether a community or state is doing enough testing to find coronavirus infections and stop the spread of the virus. The World Health Organization has said countries with broad testing should have a positivity rate that stays below 5% for 14 days.