‘More insidious than people realize’: Thousands of younger Alaskans got sick with COVID-19. And they continue to drive up case counts. 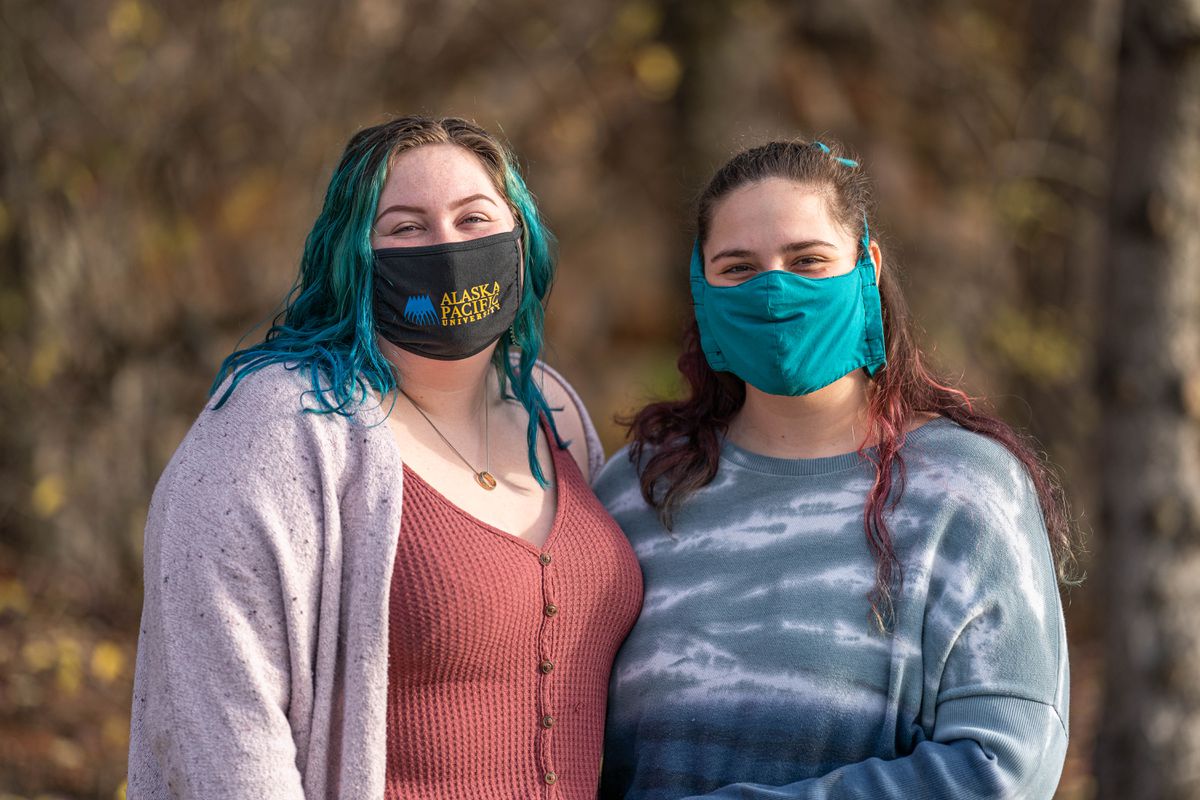 Zoe Flannery, 22, at left, and her roommate Allie Williams, 20, both found out they had COVID-19 late last month, and rode out the worst of the illness together. Photographed at Alaska Pacific University on Saturday, Oct. 10, 2020. (Loren Holmes / ADN)

Zoe Flannery, 22, at left, and her roommate Allie Williams, 20, both found out they had COVID-19 late last month, and rode out the worst of the illness together. Photographed at Alaska Pacific University on Saturday, Oct. 10, 2020. (Loren Holmes / ADN)

For nine days, Toby Germany felt miserable. She couldn’t concentrate. Her body ached. She was short of breath. And Tylenol wasn’t doing much of anything, save for maybe reducing her fever, said the 31-year-old University of Alaska Fairbanks nursing student.

“Like most bad things, you’re like, ‘Oh, I read about that in the news, but it won’t happen to me.' And then it did,” Germany said. “And I feel like it’s a lot more insidious than people realize.”

There’s no single reason behind it, but Alaska’s numbers follow a national trend, with more young people testing positive for the coronavirus as the pandemic courses through the U.S.

Younger Alaskans with COVID-19 interviewed by the Daily News described an array of symptoms: a fever that led to dehydration and a brief hospital stay, sudden losses of taste and smell, fatigue and congestion. Some recovered quickly, while others had symptoms that lingered for weeks.

Not all people who test positive for COVID-19 experience symptoms, however, and public health officials say that makes controlling the spread of the virus even more complicated.

Germany said she doesn’t completely remember the worst of her illness — only bits and pieces. She felt like it would never end, and she wanted to be still and sleep all the time. While sick, she remained sequestered on a separate floor of her home away from her husband and kids, whom she successfully kept from getting sick.

“Even just walking 20 feet across the room, I would have to sit down and gasp for air," Germany said. "Or, if I spoke too much and said too many words in a row, I would have to stop and take a really deep breath in between.”

It’s not totally clear why young people seem to be driving up pandemic numbers.

The state’s public health officials point to a possible lack of regard for pandemic safety measures among people in their 20s and 30s. Younger adults also often work in frontline jobs where they might be more likely to get exposed.

Young people may rely on a network of friends instead of a nuclear household, though some may have young children who could also bring the virus home.

Younger adults also might not show symptoms of the illness, and not know they’re spreading it to others in the first place, experts say. (In other parts of the country, the rise in cases among young people has contributed to the spread of the virus to more vulnerable and older populations, according to the federal Centers for Disease Control and Prevention.)

Certainly, Alaska is a young state. It ranks second among all states in terms of youngest median age, according to Eric Sandberg, demographer with the Alaska Department of Labor and Workforce Development.

Still, there were 3,981 cases among Alaskans in their 20s and 30s as of Friday, a little less than half of the state’s 9,182 total resident cases. That same demographic makes up less than a third of Alaska’s overall population.

‘It wasn’t really a choice. I have to pay my bills.’

When Anchorage resident Allie Williams, 20, found out her roommate had COVID-19, she left her job at McDonald’s and began telling others that she was a close contact of a recent case. Then she went in for a test, said the Alaska Pacific University senior majoring in psychology.

The following day, Sept. 24, she got her results: positive.

“I was really, really stressed out at first,” Williams said.

She and her roommate, Zoe Flannery, 22, isolated together. Williams didn’t feel all that bad — exhausted, clammy, a fever for a day and a scratchy throat — and the two played Mario Kart as they rode out the illness.

Williams said she’s been taking the virus seriously — her mom is immunocompromised — but she assumed she might catch it at some point because of her job. Maybe she’d get sick and end up fine, she thought.

But she hasn’t felt the same since returning to work. She lost her breath and couldn’t catch it after sweeping the floors for 90 seconds. She sat in bed for two hours after work one day, trying to calm down but still couldn’t catch her breath, she said. Even talking can make her feel out of breath.

“I’m starting to get kind of concerned about the longer effects,” Williams said.

While she doesn’t think she caught the virus at work, she knew it was a possibility. Not everyone remembers to wear a mask while going through the drive-thru. Williams said she tried to take all the precautions she could, but not going to work wasn’t an option.

“It wasn’t really a choice," said Williams, who had to apply for unemployment benefits while sick. "I have to pay my bills.”

Flannery, who lives with Williams, works in residential youth care and gets tested regularly because of her job. A few weeks ago, she had a cough and some congestion — late-season allergies, she figured. But after a routine test, her results came back positive.

When she found out she had the virus, she was frustrated. She wears her mask. She sanitizes her hands.

“I don’t go anywhere I’m not supposed to," Flannery said. “I just go to work and the grocery store, and that’s it.”

COVID-19 patients are mostly in their 40s, 50s and older, he said. Those patients typically have comorbidities like high blood pressure, diabetes or high body weight, which are some of the biggest risk factors associated with COVID-19. There are also people with lung problems from conditions like asthma and smoking.

Of the 60 Alaskans who have died with COVID-19, most were old enough to be considered senior citizens, and just two were under 40. But some younger Alaskans do become ill enough to need serious medical care: As of Friday, 45 of the 317 Alaskans who required hospitalization were in their 20s and 30s.

"The worldwide and nationwide data clearly tells us that on occasion, otherwise healthy young people can get very sick,” Westley said.

Though it’s uncommon, their lungs could get inflamed, leading to trouble breathing and potential hospitalization, he said. Of the young people hospitalized in Anchorage, Westley said, they have some sort of risk factor, like diabetes, chronic lung problems or high blood pressure.

The range of symptoms that someone with COVID-19 might experience is wide, both in variety and severity. Some show no symptoms while others report a bad cold or mild flu, but Westley said he’s had healthy patients in their 30s who “said it was like having the worst flu that they had.”

While those patients didn’t need hospitalization, they were run-down, achy and tired. And it took them weeks before they felt better.

“There’s definitely a subset of patients that aren’t sick enough to be in the hospital, but that maybe even now, a month, or a couple months later, just don’t feel like they’re entirely back to normal,” Westley said.

At the end of August, three friends decided to go on a camping trip near Homer, at a public-use cabin across Kachemak Bay. They were all in the same small pandemic social bubble, mindful of risks and wearing masks all summer, said Anchorage resident Tristan Walsh, 33.

On the drive back to Anchorage, Megan Holland, 26, who works in the Legislature, said she developed a “really nasty chest cough."

At that point, there was nothing she could do, Holland said. She was already in the car, breathing the same air as her friends after spending days in a cabin together.

“I’m just sitting there in the car coughing my lungs up as my friends and I drive home," Holland said.

After that, Holland got much sicker, sleeping in bed for multiple days. Walsh, who also works in the Legislature, wasn’t yet showing symptoms, but all the friends ended up testing positive for COVID-19 in the following days.

The third member of the group, a former Daily News reporter, detailed her experience with the illness in a recent op-ed.

Walsh, who is a triplet and lives with his brothers, had a fever for two days and isolated himself in his room. The 10 days that Walsh spent in isolation were emotionally taxing, and he said he was uncertain whether his mild symptoms might suddenly grow worse as his friends also became sicker.

But he made it past the 10-day mark while staying in contact with his friends and family, working from home alongside his dog Waffles and trying not to spend too much time on WebMD, Walsh said.

Holland said their six-person bubble of friends, including four who got sick, exemplifies how varied the symptoms can be in younger adults — from hardly any symptoms to days spent in bed.

“I think because we’re younger people, we still tend to have this feeling or belief that could be subconscious that we’re invincible,” Holland said. “And the reality is that’s not true.”