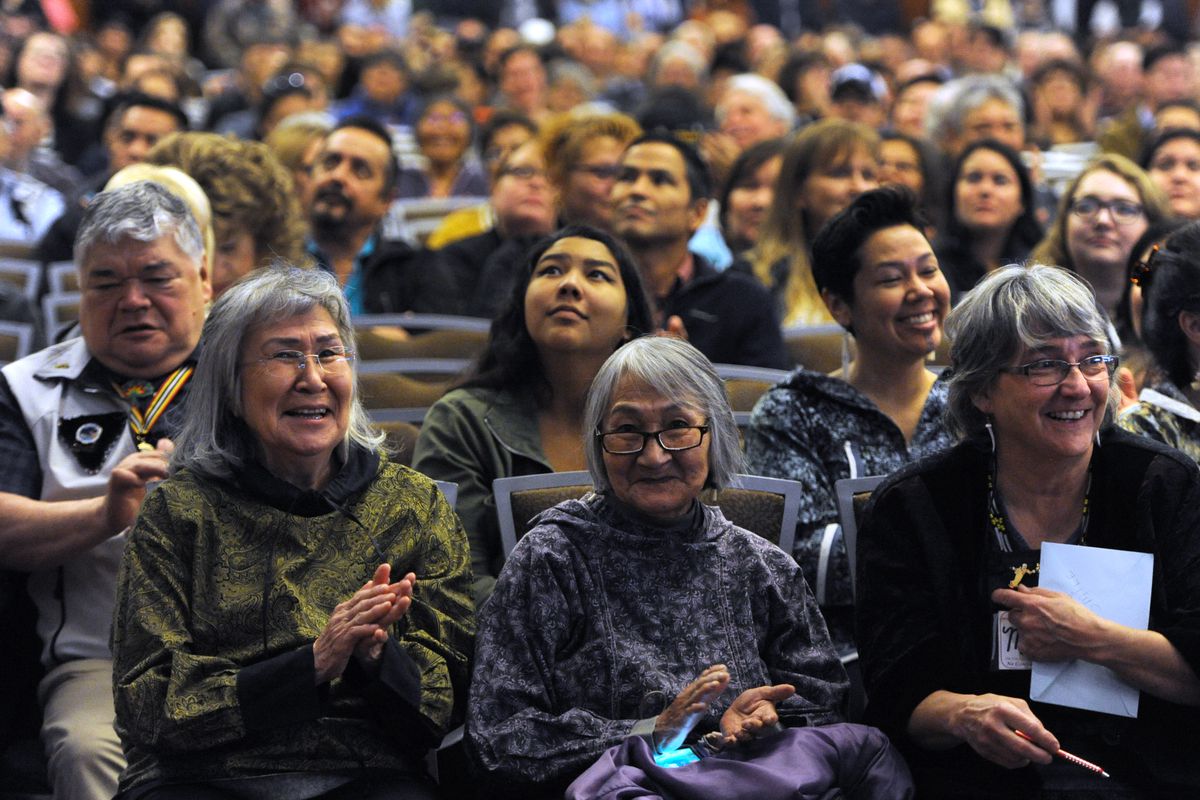 Delegates applaud during a keynote address by Lt. Gov. Valerie Davidson during the AFN Convention in the Dena'ina Center on Oct. 18, 2018. This year's convention will be held virtually because of the pandemic. (Bill Roth / ADN archive)

Delegates applaud during a keynote address by Lt. Gov. Valerie Davidson during the AFN Convention in the Dena'ina Center on Oct. 18, 2018. This year's convention will be held virtually because of the pandemic. (Bill Roth / ADN archive)

The annual Alaska Federation of Natives convention — where Alaska Natives from across the state reunite, discuss their political priorities and celebrate their cultures through arts and dance — will be held virtually this year due to the COVID-19 pandemic.

The October event will start Thursday and continue Friday, lasting two days instead of the usual three, according to the agenda.

For an event that’s as much about renewing personal connections as anything else, an online gathering will feel dramatically different from the conventions that began in 1966.

“It’s going to be very sad not to be in person,” said Julie Kitka, president of AFN, the state’s largest Native group. “It’s always a time for people to get together and renew friendships and talk about things and make plans, but it’s just not safe to gather everyone in person at this point."

“We don’t want to be the cause of a superspreader event," she said.

The 5,000 or so people who typically arrive in Anchorage on the years it’s held in the city, boosting the economy with more than $3.5 million in spending, won’t be coming this year.

Instead, attendees and the big-name politicians and policymakers who also flock to the convention will appear on nativefederation.org, KNBA public radio and statewide television on GCI Channel 1, ARCS and 360 North. An app is available to keep track of happenings.

The event will start at 8 a.m. each day. It was supposed to take place at the Dena’ina Civic and Convention Center in Anchorage, but the AFN board decided in August to go virtual. A small AFN team will broadcast from the center while participants log in.

The lineup will feature U.S. Attorney General William Barr, two U.S. cabinet secretaries, a report from a top White House official and “interviews,” rather than debates, for Alaska’s two congressional races this year.

The convention will continue last year’s theme in Fairbanks that focused on boosting public involvement in government amid tensions over the governor’s large cuts to state services.

Other themes this year will focus on Native health groups and communities fighting the pandemic, and the need for every Alaskan to be counted for the 2020 U.S. census.

A panel discussion at 1:35 p.m. Thursday will focus on Native communities taking the lead in improving law enforcement in rural Alaska after Barr declared a public safety emergency in rural Alaska last summer.

The panel will include U.S. Attorney for Alaska Bryan Schroder, Vivian Korthuis, chief executive of the Association of Village Council Presidents in Southwest Alaska and Robert Britt, special agent in charge of the FBI Anchorage Field Office.

Barr, who also appeared at the convention by video last year, is scheduled to talk at 2:20 p.m. immediately after the discussion.

The always-popular Quyana dance nights, featuring traditional village groups dancing in skins, button blankets and other regalia, will be replaced by highlight footage of past performances. Viewers will be able to nominate Alaskans who stood out in their response to the pandemic, Kitka said. Winners, announced later this year, will receive an invitation to a “virtual launch experience” by SpaceX, which is sponsoring the prize.

The aerospace company, founded by Elon Musk, will provide a representative to participate in a panel on Friday at 2:40 p.m. that will focus on high-speed broadband and other telecommunications improvements in rural Alaska.

• Speaker of the House Bryce Edgmon, the first Alaska Native in that role, will give the keynote speech at 9:40 a.m.

• Douglas Hoelscher, the White House’s Office of Intergovernmental Affairs director, will give a report from the Trump administration at 9:05 a.m.

• Young will give a congressional address at 9:25 a.m.

• Robert Wilke, secretary of the U.S. Department of Veterans Affairs, will speak at 10:05 a.m.

• Candidate interviews with Sullivan and Democratic-nominated independent challenger Al Gross are at 2:10 p.m.

[Sullivan and Gross battled it out on fisheries, Pebble Mine and Outside money in debut U.S. Senate debate]

The massive arts exhibit that typically fills the bottom of the Dena’ina Center, with vendors selling everything from walrus ivory carvings to fry bread, will also be conducted virtually this year.

Each morning will begin with another unique feature, as Kitka hosts “Coffee with the President” and talks with guests. Thursday’s group will include Gen. Glen VanHerck, head of U.S. Northern Command. AFN has worked with the military, health care groups and others to help get pandemic supplies to Alaska, Kitka said. On Friday morning, Kitka will speak with Indian Affairs Secretary Sweeney.

Kitka said the increased isolation during the pandemic has weighed on people, but the upside is that the next in-person convention will be especially nice.

“People will be so happy to come together again,” she said.