She’s in her 20s, fit ... and facing serious COVID-19 complications months after she got sick 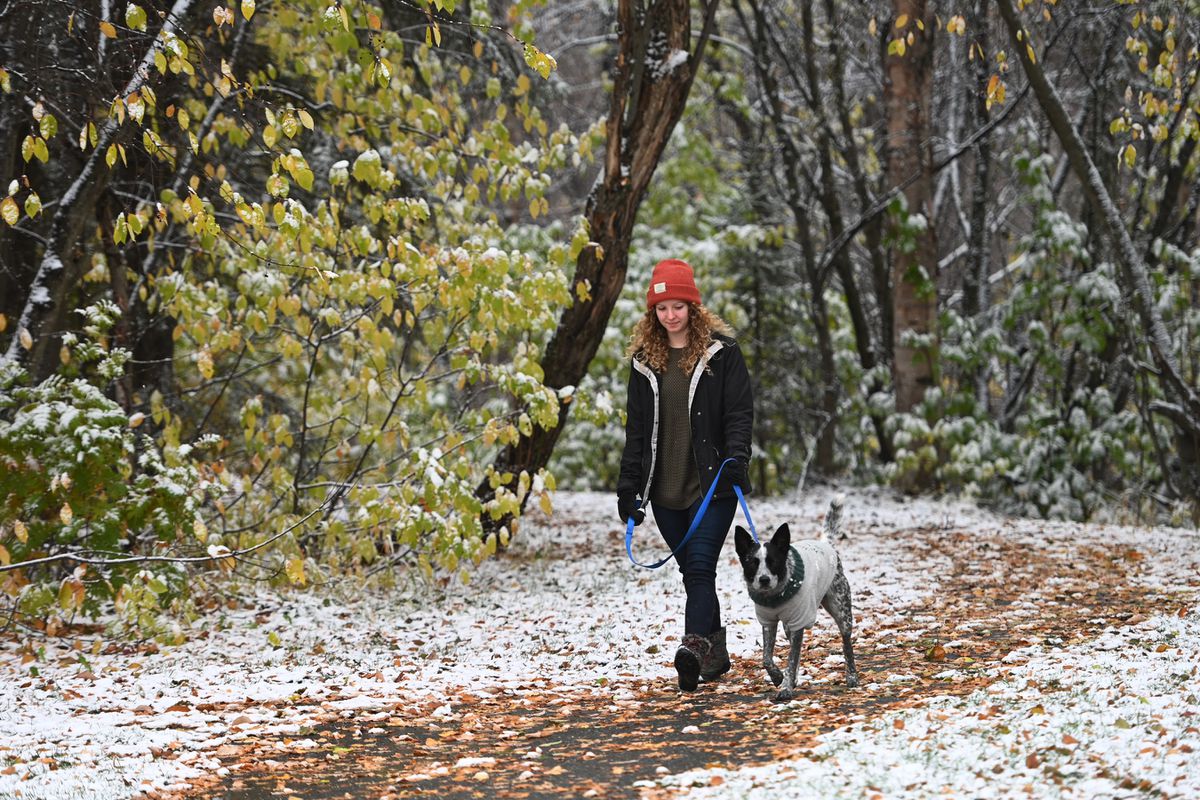 Kaila East walks with her dog Sockeye after the first snow on Sunday, Oct. 18, 2020. East who is a health care worker tested positive for COVID-19 in June and is dealing with health issues months later. (Bill Roth / ADN)

Kaila East walks with her dog Sockeye after the first snow on Sunday, Oct. 18, 2020. East who is a health care worker tested positive for COVID-19 in June and is dealing with health issues months later. (Bill Roth / ADN)

The 27-year-old physical therapy assistant spent a week with what she described as fairly mild symptoms apart from intense leg cramps: low fever for a day; fatigue; a slight cough; and loss of sense of smell.

Then the symptoms disappeared. East, an avid hiker and skier, felt “totally fine” and got back to normal life. It did take six weeks for her COVID-19 tests to turn negative. Then she returned to work.

By September, there was an ache around her shoulder blades, but she didn’t think much of it.

By early October, she couldn’t ignore her new symptoms.

One Sunday night, East’s breathing felt wrong. Her heart rate rose to 120, elevated for such a fit person whose pulse usually hovers in the 70s.

Two days later, at work, East’s heart started pounding and she felt light-headed. Her heart rate rose to 200 beats a minute. East ended up at the Providence Alaska Medical Center emergency room where a doctor ordered a CT scan.

“That’s where they found I had a bunch of pulmonary emboli in both my lungs,” she said in mid-October. “The doctor said he thought it’s probably because of having COVID, that they’re seeing that pretty commonly.”

More than 25 million people around the world — including roughly 5,500 Alaskans — are considered recovered from COVID-19. But for some, the effects linger.

As the months of the coronavirus pandemic go on, researchers are seeing long-lasting effects in people like East. There’s no name for it, but people who continue to suffer ill effects for weeks or months have taken to calling it “long COVID.”

And there’s another far less common but similarly unwelcome COVID-19 surprise: People reinfected with a slightly different strain of the virus than they had before.

East can’t say for sure she didn’t get reinfected, but she personally believes her original virus came back.

For one thing, it took a long time to get a negative test: East tested positive for six weeks before testing negative in August. She tested negative the week before she ended up in the ER in October, but a rapid test at the hospital was positive, according to her physician there, Dr. Herman Ellemberger.

The emboli, blood clots that get wedged in a lung artery, were small. But they were enough to make East feel winded at the hospital, Ellemberger said. Generally, an embolism knocks out lung capacity by blocking arterial blood flow to lung tissue.

Ellemberger said he can’t say for certain that East’s problems stemmed from her initial infection, though clinically proven reinfections are rare.

“I don’t think you can really say whether it’s from the June infection and now the pulmonary embolism became clinically significant or whether she got reinfected," he said.

East thinks the isolated positive test at the hospital could still be an aftereffect of her June infection. Another test about a week later was negative. None of her close contacts tested positive. Her samples are being sent for additional genetic testing to see if the strains involved are the same.

It’s not unusual for patients recovering from severe illness of any kind to suffer long-term effects. But with COVID-19 patients, researchers are seeing long-term health problems even in those who never got sick enough to be hospitalized.

[Thousands of younger Alaskans got sick with COVID-19. And they continue to drive up case counts.]

Patients describe symptoms that flare up unpredictably, often in different combinations, and can be debilitating for days and weeks at a time.

A July Centers for Disease Control report specifically addressed people with milder cases of COVID-19 who became long haulers, or what the federal agency dubbed “Delayed Return to Usual Health.”

Just over a third of adults surveyed by phone still weren’t back to normal two to three weeks after testing, according to the study, which covered people in multiple states between March and June. Even in young people between 18 and 34 without chronic medical conditions, one in five hadn’t returned to their usual state of health.

An article published earlier this month in the Journal of the American Medical Association said joint and chest pain, as well as heart, lung and brain dysfunction, could be the result of factors, singly or combined, including “direct tissue invasion by the virus ... profound inflammation and cytokine storm" (a severe immune reaction associated with COVID-19) or related immune system damage.

It can also result from an abnormally increased tendency toward blood clotting described in association with severe cases of the virus.

“Because COVID-19 is a new disease, much about the clinical course remains uncertain -- in particular, the possible long-term health consequences, if any,” the authors write.

East spent the night in the hospital after her lung diagnosis. She was prescribed blood thinning medication she’ll need to take for three months to keep the clots from growing. The hope is that her body will naturally reabsorb them over time.

“Hopefully, everything will go back to normal and nothing else horrible happens,” she said.

Her heart rate has returned mostly to normal but rises more than usual if she’s exerting herself. She also gets chest pain and sometimes gets an aching pain in her back.

She decided to publicize her experience as a “reality check” for those who might think the virus is only dangerous for older people or those with pre-existing conditions.

East said she sees younger people, friends, who dismiss the risks of COVID-19 because they’re not worried about getting it.

“It’s been going on so long, I think people are just getting tired of it and letting their guards down,” she said, adding that’s understandable. “Even if you feel only mildly ill when you have it, you just don’t know how it will affect you and people just need to keep being careful.”