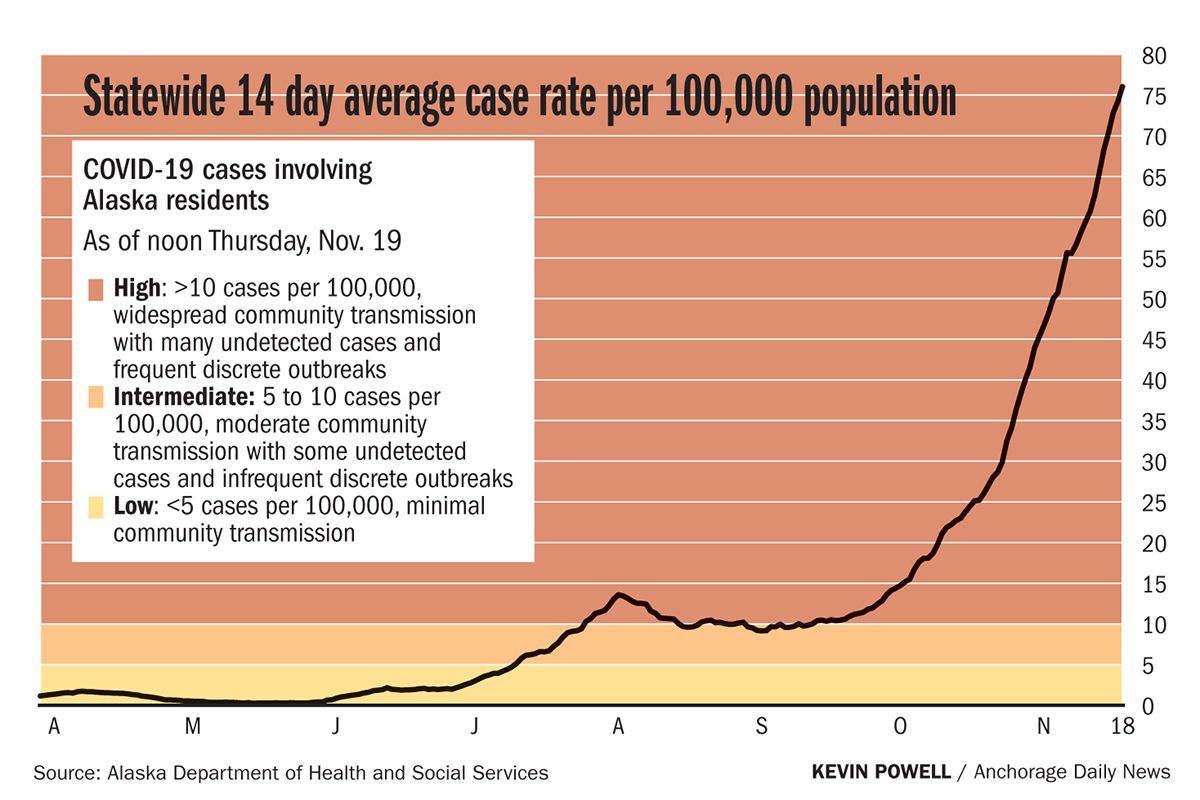 State health officials on Thursday said it is becoming increasingly difficult for hospitals to care for patients in Alaska, as a national and statewide surge in coronavirus cases continues, and hospitalizations remain high.

The state reported one new death Thursday: a man in his 40s from Anchorage, who was the 100th Alaskan to die with the virus.

There were also 505 new COVID-19 cases reported on the Alaska Department of Health and Social Services data dashboard. As of Thursday, there were 127 patients with COVID-19 across all facilities in the state, including 14 who were on ventilators. An additional 22 hospitalized people were suspected to have COVID-19.

Dr. Anne Zink, the state’s top doctor, told reporters Thursday that it is becoming increasingly difficult for hospitals to provide adequate levels of care to all who need it due to the increasing number of COVID patients.

“When you’re seeing half to two-thirds of your patients sometimes on a shift who are all there because of COVID, you know something is very, very different,” she said. “And it’s heartbreaking to see young, healthy people say, ‘You know, I just thought I would be OK,’ and really, really struggling to breathe.”

Hospitals statewide are working on increasing staffing and decreasing the numbers of overall patients to improve capacity for those who need care most, she said.

Those cracks come in the form of patients being transferred from rural areas to hospitals that typically don’t receive transfers, and staffing issues related to health care workers needing to quarantine or isolate because of possible exposure, he said.

“If this gets worse as the trajectory suggests that it will, you’re going to see bigger cracks,” he said.

In Anchorage, Acting Mayor Austin Quinn-Davidson said Wednesday that while she had no plans of imposing additional restrictions this week, if COVID-19 cases continue to surge, the city will need to take action.

“We will not allow our hospitals to become overrun,” she said in a statement.

In total, 100 Alaskans with COVID-19 have died and one nonresident has died. Alaska’s overall death rate per capita remains among the lowest in the country but has been rising.

Of the new cases reported in Alaska residents, there were 248 in Anchorage, plus four in Chugiak, 10 in Eagle River and three in Girdwood; two in Anchor Point; nine in Homer; 19 in Kenai; one in Nikiski; three in Seward; 28 in Soldotna; 11 in Sterling; seven in Kodiak; 20 in Fairbanks; four in North Pole; 11 in Delta Junction; one Big Lake; one in Houston; eight in Palmer; 22 in Wasilla; four in Nome; six in Utqiagvik; three in Kotzebue; one in Douglas; five in Juneau; two in Ketchikan; six in Sitka; one in Skagway; 29 in Bethel; and one in Dillingham.

Another five cases were reported in nonresidents: one in Homer and four in an unidentified region of the state.

While people might get tested more than once, each case reported by the state health department only represents one person.

Of the new cases, it is not reported how many patients were showing symptoms when they tested positive. The Centers for Disease Control and Infection estimates that about a third of people who have the virus are asymptomatic.

The state’s testing positivity as of Thursday was 8.03% over a seven-day rolling average. A positivity rate over 5% can indicate high community transmission and not enough testing, health officials have said.

In total, 26,061 Alaska residents and nonresidents living in Alaska have tested positive for the virus since March.

Alaska’s rising case counts, hospitalizations and deaths continue to follow a national trend: The U.S. coronavirus death toll has surpassed 250,000 people, and 1 million new cases were identified in the past week.

As the holidays fast approach, the nation’s top public health agency on Thursday issued new guidance urging Americans not spend Thanksgiving with people outside their households.

In that Mat-Su, the school district announced Thursday that they will shift to remote learning Monday through Wednesday, before the Thanksgiving holiday. The decision was made because of continued teacher shortages and lagging contact tracing efforts in the district. Schools are expected to reopen Nov. 30.

State health officials say the rise in cases is causing contact tracing efforts to be strained statewide, and ask those who test positive to reach out to their own close contacts.

Close contacts should then quarantine for two weeks even if they’re not showing any symptoms, and even if they receive negative test results during that time. If asymptomatic, close contacts are encouraged to get tested about a week after their potential exposure.