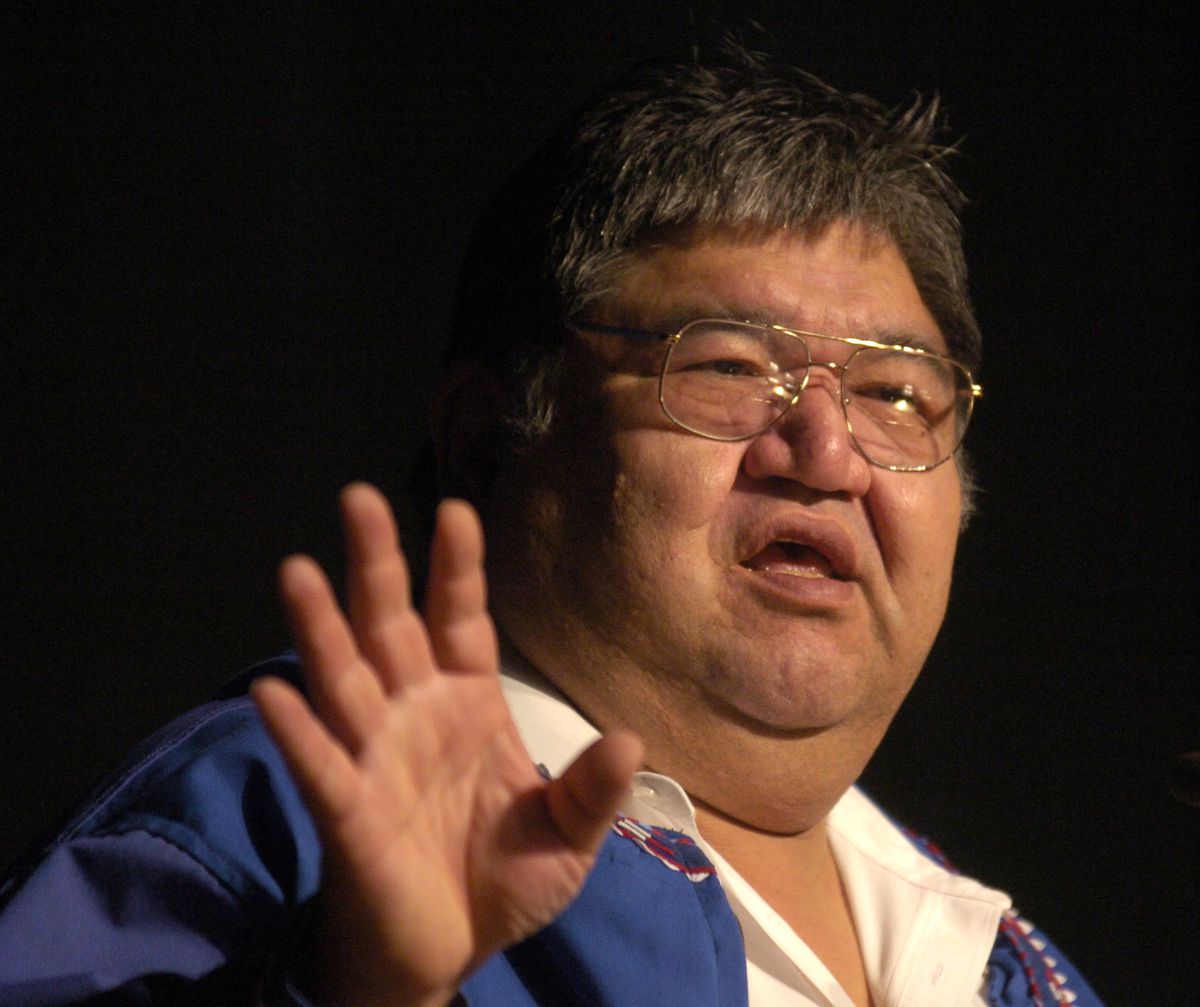 Trefon Angasan, resolution committee chair of the Alaska Federation of Natives, at the AFN conference in Fairbanks in October 2005. Angasan died of complications from COVID-19 on Sunday. (Marc Lester / Anchorage Daily News)

Trefon Angasan, resolution committee chair of the Alaska Federation of Natives, at the AFN conference in Fairbanks in October 2005. Angasan died of complications from COVID-19 on Sunday. (Marc Lester / Anchorage Daily News)

Trefon Angasan Jr., a longtime Alaska Native leader who played prominent roles in the Alaska Federation of Natives and several Native corporations, died Sunday in Anchorage from complications of COVID-19.

Angasan was a founding member of the Alaska Peninsula Corp., representing shareholders in the Bristol Bay watershed near the proposed Pebble mine site. Born in Savonoski as one of 10 brothers and sisters, he moved to South Naknek for school and grew up in canneries with his parents, according to a 2018 interview on Project Jukebox, a University of Alaska Fairbanks oral history program.

Angasan was a “primary driver” during the corporation’s financial reorganization in 2016, according to a Facebook post from the corporation Monday announcing Angasan’s death.

Angasan was best known for his generosity and “desire to help those who needed it most,” the statement said. He was “known for his leadership at Department of Interior, Bureau of Indian Affairs, Bristol Bay Native Association, Bristol Bay Native Corporation, the Alaska Board of Fish, Alaska Federation of Natives, Alaska Native Justice Center and many more organizations throughout Alaska.”

Angasan sometimes worked with Northern Dynastry contractors for Pebble Mine and was quoted in a Washington Post article in 2015 saying he wanted to the permitting process played out to see if the mine could be operated sustainably.

“Congress gave us these lands when they took away our aboriginal hunting and fishing rights, and they said we had to maximize our economic opportunities,” he was quoted saying.

Angasan died in the hospital, according to the family’s attorney, Sam Fortier, who knew him for 50 years. Fortier called Angasan’s death a great loss. Angasan, who was Alutiiq, moved to Anchorage from Bristol Bay in the mid-1970s.

Brad Angasan, Trefon Angasan’s son, announced his father’s death Sunday on Facebook: “Our beloved father, husband and Paba has surrendered his soul to heaven and has fallen asleep in the Lord. He fought so hard, but in the end was just too tired. Thank you all for your prayers and calls of support.”

He also shared the second to last Facebook post his father wrote, just over a week ago, to “give everyone everyone an idea just how dangerous COVID can be. ... We prepared to celebrate his return home, began planning for his decorations that he so looked forward to during Christmas ... then this ...”

Trefon Angasan’s Nov. 23 post was made from Alaska Native Medical Center. He praised the quality of his care and described passing a breathing test, getting a powerful antibiotic to ward off pneumonia, and having positive signs he was moving toward recovery.

“My nurse says i probably can go home tomorrow if my current levels are the same tomorrow,” Angasan wrote.

From one day to the next, the family went from planning his father’s return to dealing with the funeral home, Brad Angasan said in a message Tuesday.

Word of Angasan’s death drew hundreds of comments and reaction throughout the state.