With ongoing landslide danger, Haines evacuees wonder when they can return home 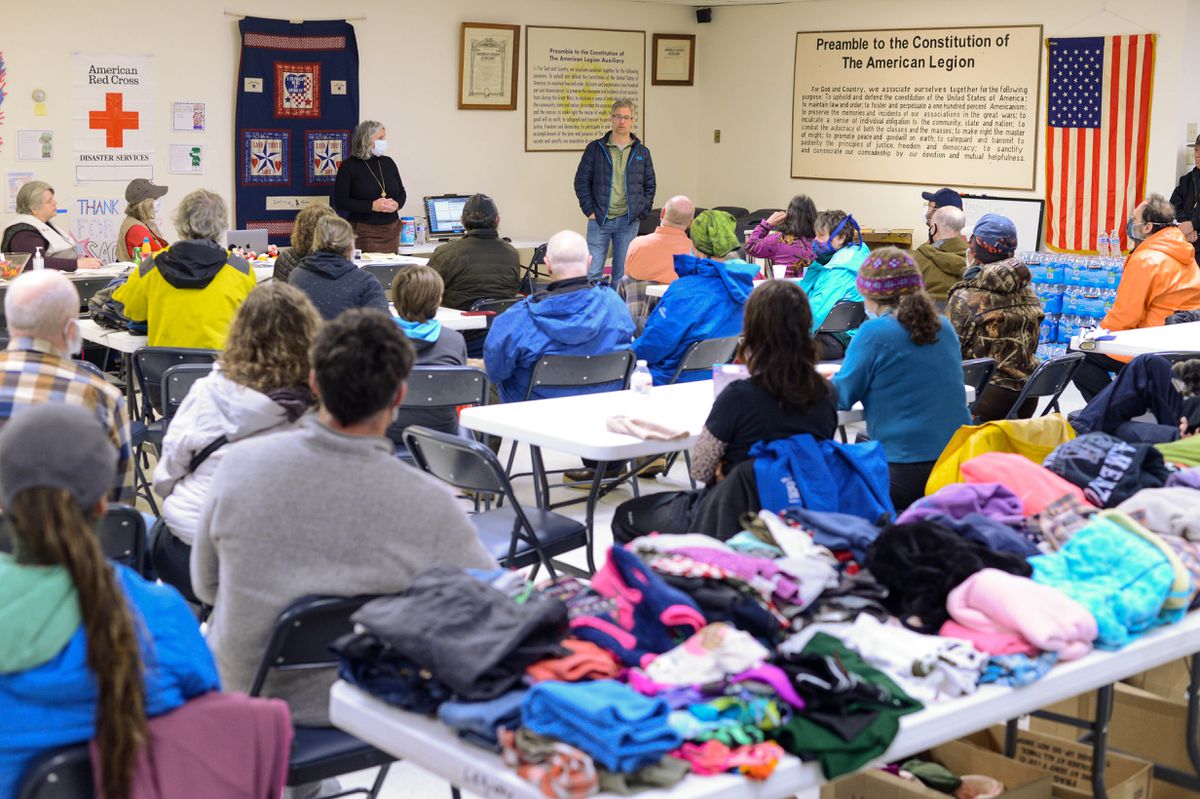 HAINES — On Tuesday night, Dean Lari — usually called “Bear” around here — went to sleep in his isolated trailer on a plot of land where he hoped to build a cabin.

It was a creeping landslide, one of dozens that struck Haines amid record-breaking rainfall.

“I’m just happy to be alive,” he said Friday from the American Legion Hall, which has become a hub for evacuees.

“This is the kind of stuff you only see on TV,” he said.

This Southeast Alaska town has been battered by floods and landslides over the past week, and two people — 23-year-old kindergarten teacher Jenae Larson and 30-year-old local business leader David Simmons — remain missing after the biggest slide swept through a residential area Wednesday.

Hundreds of homes have been damaged, and about 50 households have been ordered to evacuate because of landslide danger, Mayor Doug Olerud said.

Many evacuees left home in the night, with little more than basic essentials, and they don’t know when they can return home.

Her own home was flooded, though it remains habitable. Other damaged homes are unlivable without major repairs.

Rescue workers have put cots in the Haines School’s gymnasium, and the dormant Hotel Halsingland is being reactivated. Fullerton and Olerud said more homes may be evacuated if the landslide risk increases.

An anxious wait to evacuate

In Lari’s neighborhood, known as Lutak, the risk was apparent early on.

One of Lari’s neighbors woke on Wednesday morning to find mud filling his bedroom. Another saw a three-story cabin reduced to a single story. Vehicles fell into newly created streams and trees toppled as their roots were undermined.

Lari collected pictures and video on his cellphone. When landslides blocked the road to town, he and other residents were told to go to the shoreline and wait for a boat.

For many, including Lari, the boats didn’t come on Wednesday. Another, bigger landslide struck the Beach Road residential neighborhood closer to town, and others needed to be evacuated first. Two people are still missing.

That left Lari and others in Lutak to wait through an anxious night. Lari said they wondered if another slide would kill them all as they waited.

“There’s no worse feeling in my life,” he said.

The following day, crews from the Alaska Department of Transportation and Public Facilities used heavy equipment to open a short-lived single-lane path through numerous landslides, allowing Lutak residents to evacuate.

Lari took his guitar, his pets — two cats and a rabbit — and his marijuana.

“I grabbed all the important stuff,” he said, cracking a smile after tearfully recounting his story.

[In photos: Haines grapples with landslides and flooding after a record-breaking storm]

On Thursday night, police expanded the evacuations to another neighborhood, known as Cathedral Hill.

Residents were told to leave notes on their doors with their names and cellphone numbers, the better to keep in contact with police.

Julie Vance saw the evacuation order and stopped only to grab a handful of basic necessities, then ran out the door and into the dark.

Neighbor Sherri Maust had landslides on two sides of her house. Both women and their children are now staying with friends.

On Saturday, the two were among three dozen people who gathered at the American Legion Hall, which has become a hub for aid.

The previous night, the hall was filled by tables loaded with food, clothing and toiletries, all illuminated by brilliant fluorescent lights that completely contrasted with the gray skies and early darkness outside.

Giant boxes of diapers sat next to containers of tampons, loose hairbrushes, bottles of soap, wrapped shampoo and clean towels.

Leaning against a nearby wall Friday night was a whiteboard labeled with the heading “Needs List.” The only thing below it was a scrawled “Thank you” accompanied by an illustrated heart.

“We’re dealing with a community that wants to do something,” said volunteer Lora McCoy, and that “something” has resulted in massive amounts of donations.

When one evacuee came in looking for a ballcap and couldn’t find one, word spread.

“There was not one ballcap there, and then there were 20,” she said.

One parent came in looking for a stuffed bear for their child, who couldn’t sleep without one. Another parent needed — and got — a nightlight for their kids, who weren’t used to going without.

McCoy said hugs and open ears have been just as important as physical things.

“I think that’s the biggest thing — people just need a connection,” she said. “It’s that important.”

More supplies are expected on each ferry arriving in Haines, and city officials are now asking for contributions on Gofundme or to the Salvation Army instead of for physical things.

Talking to evacuees on Saturday, Mayor Olerud said they still can’t return to their homes, and it might be a long while before they can. Bad weather has kept geologists from getting a good view of the scene from the air, which means the extent of the risk of further landslides is not yet known.

Even if they do get a look, the geologists are recommending that no one enter the slide areas until four days after the last rainfall.

That comment stirred his audience. Outside, gray skies were dumping a heavy mixture of rain and snow.

“We know that’s not what you want to hear,” Olerud said.

One resident asked if police or city workers could check on their homes. He and others are more concerned about bears than crime.

Olerud told the resident he couldn’t help — even if someone were available, he wouldn’t put them at risk.

“People are not resources,” he said.

Some evacuees have been temporarily displaced by flooding damage, rather than landslide risk.

Early Wednesday, Lindsey Edgar awoke to find 2 or 3 feet of water sloshing in her living room. Her shoes floated out the front door. Her chickens, which she thought were safe in the garage, drowned.

Volunteer rescuers needed to use a front-end loader to lift Edgar, her dog and a few possessions from their home.

She’s gone from motel to hotel in the days since then and has recovered a few more things, but her house isn’t inhabitable. A crowd of friends helped on Saturday, removing carpet and other fixtures, but she isn’t sure how she’ll pay for other repairs. Her insurance adjuster said the flood damage isn’t covered.

Most evacuees said they absolutely intend to return home, rebuild, repair and do whatever else they need to fix things.

Lari, one of the Lutak evacuees, said he’s not going to do that. After 13 years in Alaska, he’s going to call it quits.

“I’m done,” he said. “I’m moving. I’m going to Washington. There’s nothing for us here anymore.”