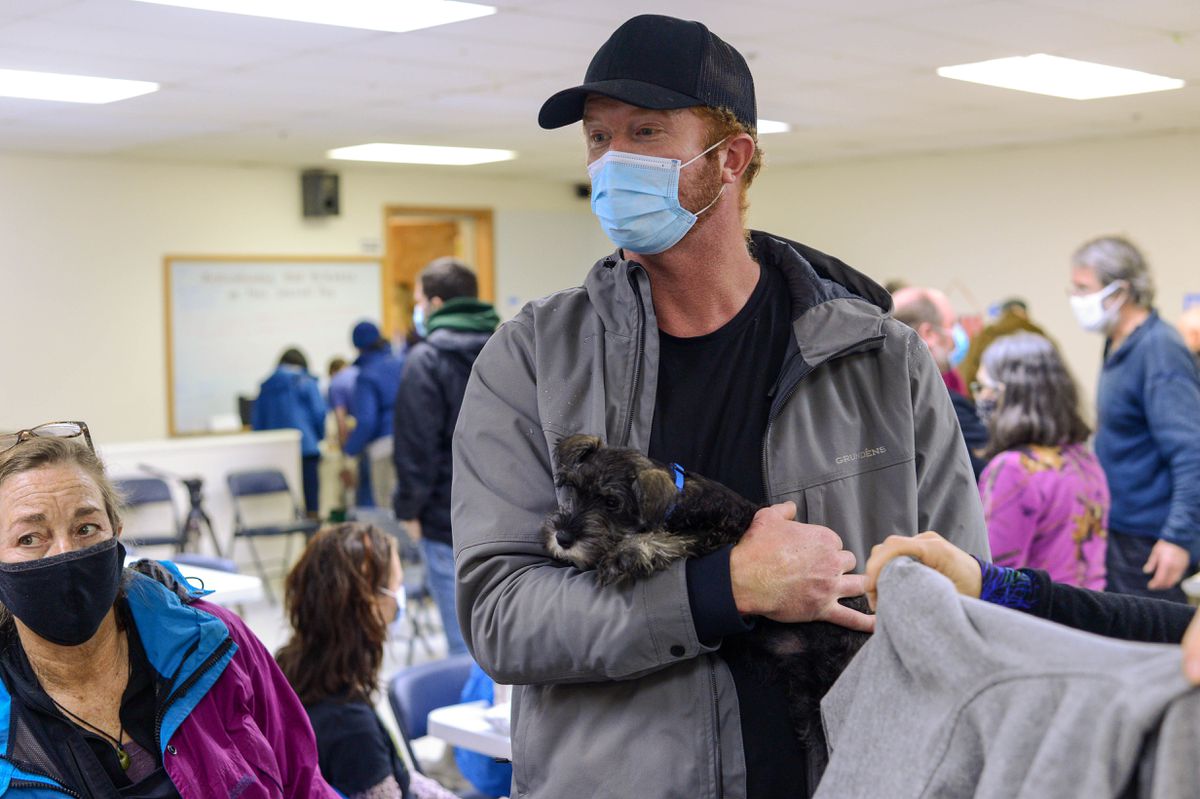 Ira Henry holds Snoop Dog as he talks to other evacuees during a lunchtime meeting on Saturday, Dec. 5, 2020, at Haines' American Legion Hall, which has served as a hub for evacuees after landslides and flooding over the past week. (James Brooks / ADN)

Ira Henry holds Snoop Dog as he talks to other evacuees during a lunchtime meeting on Saturday, Dec. 5, 2020, at Haines' American Legion Hall, which has served as a hub for evacuees after landslides and flooding over the past week. (James Brooks / ADN)

In the wake of a flurry of landslides and flooding in the Southeast Alaska town of Haines, two people remain missing, dozens of homes have been evacuated and more residents have been told to be prepared to leave their homes at a moment’s notice.

In a town where it’s common to walk down Main Street and see parked cars with dogs in the passenger seat, evacuation means lots of displaced animals, too.

Residents have pulled together to do what they can to help: Donations have poured into the animal shelter. Some in Haines launched rescue missions for four-legged family members left behind in an emergency evacuation.

Others have taken in animals separated from their owners: Pygmy goats are lodging at the American Bald Eagle Foundation’s farm, birds are bunking with new friends and rehomed cats and dogs are spread across town.

“It’s kind of a ‘prepare for the worst, hope for the best’ situation,” said Tracy Mikowski, manager at Haines Animal Rescue Kennel.

[Search for 2 Haines residents suspended amid threat of more landslides]

In the oceanside Beach Road neighborhood, after a 600-foot slab of mountain slid into the water last Wednesday, a small mission to retrieve a 156-pound malamute named Gooch — stuck inside his owner’s home for two days — was underway.

After the Beach Road slide, Gooch’s 75-year-old owner, Dawn Woodard, and her husband grabbed medicine and their cat before fleeing with other residents. They left Gooch, whose name means “wolf” in Tlingit, with a pile of food inside a glass-walled porch.

The landslide brought trees, telephone wires and debris into the road connecting them to town, necessitating a beachside boat evacuation. Woodard assumed she would be back the next day, but troopers closed the area to residents, citing unstable ground and additional slide risks.

The harbormaster, a state parks ranger and search and rescue volunteer Greg Schlachter were deployed on a rescue mission by boat once Schlachter got word that a dog and two cats were left behind and their owners were planning on getting them, one way or another.

“Particularly the guy was like, ‘These older folks are gonna march over (Mount) Riley and down Battery Point to save them if you guys don’t allow them to go get in a boat and go do it,’ " Schlachter said.

Early Friday, the crew and Woodard piled into the harbormaster’s boat, with beef jerky brought along as bait for the pets. Upon arrival, Woodard secured the neighbor’s cats and then went to her house to find Gooch. The dog quickly let her know he needed to be let out to use the bathroom.

“He just came up to me and kept rubbing on me and rubbing on me,” she said. “That’s the way he says ‘I love you.’ And out the door he goes,” to relieve himself after two days of being cooped up.

The family is reunited and staying at the Captain’s Choice Motel for the time being. “Gooch is just happy we’re together,” Woodard said.

[With ongoing landslide danger, Haines evacuees wonder when they can return home]

In another rescue mission across town, Kaitlyn Tolin and Amanda Painter were driving around on the day of the Beach Road landslide to see how they could help. Record rainfall had already washed out some roads and flooded entire neighborhoods.

In Spruce Grove Trailer Park, Betty Reyes was assessing how she was going to cross waist-high water to save her 9-year-old husky mix named Molly inside her home. Reyes lives there part-time with her boyfriend, but the two hadn’t been home since the night before. “It was so emotional,” Reyes said. “I was in tears with my dog (inside).”

Painter and Tolin offered to help using the paddleboards in the back of their truck. Water had flooded the kitchen by the time they entered the house, and Painter said Molly “was ready to get out of there.”

With a bit of encouragement, the two got Molly onto a board and paddled her across the front lawn to her owner.

“She was scared to get off the paddleboard at first, and when she did, she was wagging her tail,” Reyes said.

She said the landlord plans to tear down four homes not worth repairing from water damage — including theirs. Now the couple will move to Reyes’ home in town, though it’s in an area Haines officials have warned to be a potential evacuation zone.

Despite the damage and the loss of two cars, Reyes said she’s grateful to live in a community like Haines.

“This is the best community,” she said. “Everybody is helping out how they can. My dog is safe — so that, I’m grateful for. Things could always be worse.”

Mikowski, with Haines Animal Rescue Kennel, is helping the borough coordinate a list of volunteers to house pets. “Obviously, they can’t all be here at the shelter,” she said.

In response to a call for volunteers on HARK’s Facebook page, Mikowski heard from people in Juneau offering to send up truckloads of supplies on the ferry, and homes across the state and even the country willing to accept pets. (Borough administrator Donna Lambert also said that area hotels have been allowing pets to stay in their rooms with owners.)

For now, Haines residents alone have stepped up to meet the pet-fostering need.

Caitie Kirby lives in a part of town that’s remained largely unaffected by the slides and evacuation orders. She said signing up to house birds in the small house she shares with her friend and her pitbull, Lucy, was the least she could do to help out.

“If there was no COVID, I would have people on my floor,” Kirby said. “I’m not a skilled search and rescue person, but I’m like, ‘Oh, I have room for birds. Put us on all of the lists for everything we can possibly do.’ "

Sidney Campbell, raptor program manager at the American Bald Eagle Foundation, is helping care for two displaced pygmy goats. The goats — which are the size of small dogs — were brought into town by their owner’s neighbors, who evacuated from their farm with eight children and nine goats on foot and by ATV to stay at a friend’s home last week.

Campbell’s home, like Kirby’s, remains unaffected by the flooding and slide damage that left many other residents reeling.

“It feels really bizarre to be in what feels like the only part of town that hasn’t been hit very hard, and to watch in every direction around me as the town sort of crumbles,” she said. “It’s nice to be able to at least take this one weight off someone’s plate. This is the one thing that I’m good at. Animals are the things that I know.”

Haines veterinarian and reality television star Michelle Oakley — who often travels outside Haines to film her Nat Geo Wild series, “Yukon Vet,” or to Girdwood, where she serves as the vet at the nearby Alaska Wildlife Conservation Center — said she’ll be staying in town to host free clinics for animals at Haines Animal Rescue Kennel.

“With everything going on, nobody needs to be worried about getting out trying to get help,” Oakley said. “There’s so much tragedy right now and everyone needs their pets. They’re your family members. Haines is a perfect example of that.”

Oakley estimates she’s seen 30 animals in five days since the slide that have been either injured in transport, or dealing with stress-related issues.

“I just feel so lucky to be able to help out,” Oakley said. ”You can see that everyone just wants to help. Everybody here has a skill, and they’re using it now to help everyone else.”

Correction: A previous version of this story incorrectly reported the name of Spruce Grove Trailer Park.