In Haines, divisions recede as community members rally to help after landslides and flooding 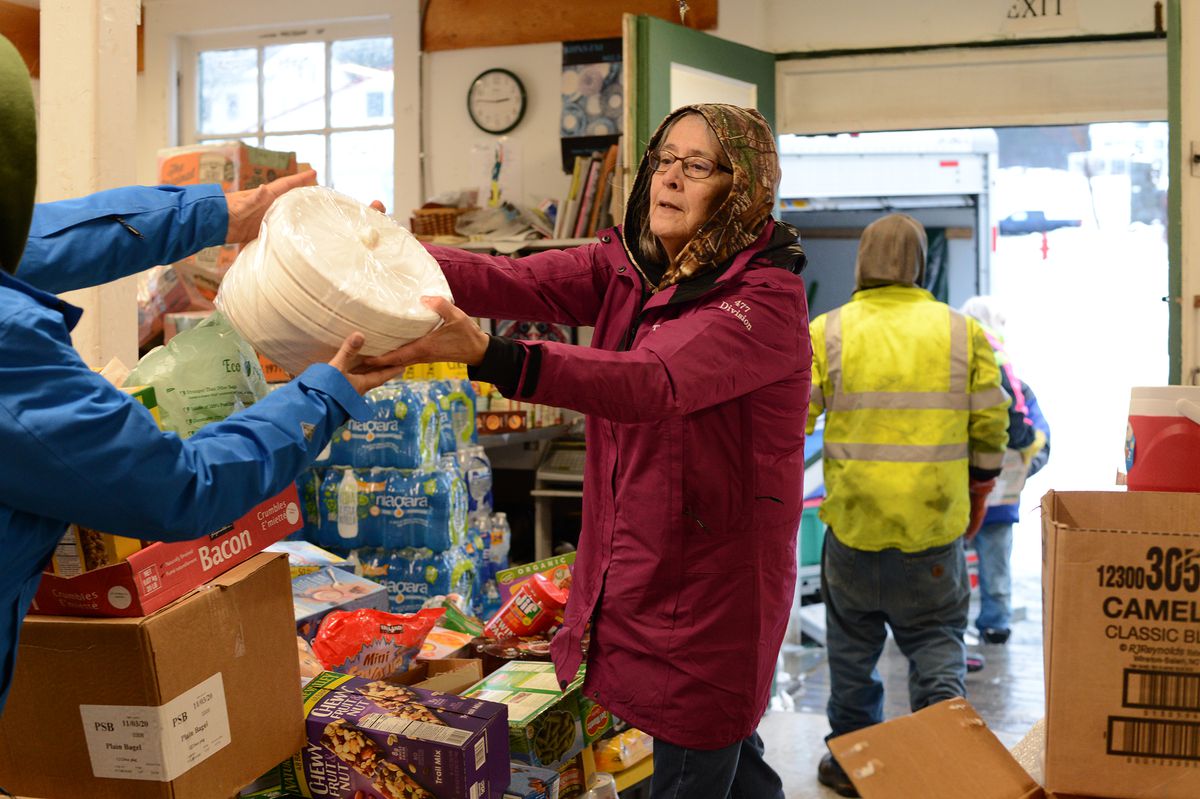 Kathy Berzanske passes a package of paper plates as she unloads a truck of relief supplies donated to Haines by Juneau residents on Sunday, Dec. 6, 2020. (James Brooks / ADN)

Kathy Berzanske passes a package of paper plates as she unloads a truck of relief supplies donated to Haines by Juneau residents on Sunday, Dec. 6, 2020. (James Brooks / ADN)

Since last week, after a historic amount of rain triggered landslides throughout Haines and flooding in different parts of town, residents of this Southeast Alaska community have rallied together to regroup and rebuild.

A few homes were destroyed and hundreds more were damaged, and many have evacuated from their homes without a clear sense of when they can return.

People in Haines are putting aside their personal differences and focusing their efforts around a single question: How can I help?

“That’s how Haines is,” said 10-year resident and volunteer Janine Allen. “We don’t always excel at the day-to-day meetings — we get kind of cranky and ornery with one another — but it’s always been the case that the moment something bad happens, everyone comes together. When someone gets cancer, everyone’s at the spaghetti fundraiser the next night.”

Haines, a Southeast Alaska community of about 1,800 residents in its townsite and another 700 spread throughout a borough twice the size of Rhode Island, has a strong legacy of volunteerism. This is a town whose fire department, award-winning library and even large segments of its beloved community radio are run almost exclusively by volunteers.

Haines is also a community that has been roiled by local politics in the past. And it’s no stranger to the same politically charged debates that have popped up in towns across the country over mask wearing, COVID-19 and the November presidential election.

For many locals, once it became clear that Haines had an emergency on its hands, those divisions faded into the background.

Alekka Fullerton is the Haines borough’s interim manager. She’s also one of the incident commanders tasked with coordinating relief efforts for a town rocked by a search for two people still missing — David Simmons, 30, and Jenae Larson, 23 — plus severe flooding, continued landslide risk and a persistent threat of COVID-19 spread with state and federal agencies pouring into Haines to assist.

By Sunday morning, the fourth full day after the landslides started, Fullerton had a list of more than 120 volunteers wanting to help out. “Those are the official ones,” she said. Many more weren’t bothering to sign up. They were simply going out and doing.

Local fishermen beelined to the dock and began ferrying residents trapped behind the biggest landslide’s debris pileup to shore. Salvation Army staff hauled in clothes and food for evacuees at the American Legion. A local hotel employee, anticipating a flood of displaced residents, called her friend. “Can you help me make beds?” she asked.

Everyone started cooking. Residents owning Bobcats and backhoes began sweeping town, filling in ditches and digging out culverts. Others schlepped through mud and streams where roads once stood to deliver hot meals to the Senior Center. Local artists began circulating drawings and paintings to fundraise for the victims’ families.

Residents are lending a hand and not letting personal differences get in the way.

“I can just tell you that there are people helping people in this town who maybe weren’t speaking to each other two weeks ago, and now they’re helping each other,” said Heather Lende, a local writer who has long penned the town’s obituaries and previously served on the Borough Assembly. “I’m helping people that signed my recall petition. Just, ‘bingo, what do you need?’ ”

Residents often use the word “divided” when describing Haines. In 2017, the town made national news when a group of unhappy voters launched a recall campaign against three Borough Assembly members, including Lende.

A recall election was held, and all three kept their positions but decided against running again. In her most recent book, Lende described the shock of the recall campaign in a town she settled in decades ago as akin to having been cheated on.

“We’ve become more isolated and divided nationally, and I think that is reflected locally,” Tom Morphet, one of the Assembly members, told radio station KHNS at the time of the recall campaign.

There are 438 Democrats and 419 Republicans registered in one voting precinct. In another, that split is 59 and 51. (Independents still make up the majority.)

One recently elected Borough Assembly member, Caitie Kirby, said that tensions have run high in the wake of the November presidential election and a clear divide between businesses that required customers to wear masks versus those that didn’t.

After this month’s landslides and flooding, “everybody instantly sort of forgot about this, or it didn’t matter. It didn’t matter who you voted for or if you think masks work or don’t work,” Kirby said. “That was kind of amazing.”

[With ongoing landslide danger, Haines evacuees wonder when they can return home]

In May, the borough’s elected assembly fired the borough manager, lifelong resident Debra Schnabel, after tumultuous arguments over a city sand truck and COVID-19 masks. It was the third time since 2014 that a Haines manager had been either fired by the Assembly or quit because of disagreements.

Schnabel, who admitted that her firing still stings, did not hesitate to offer up help to new management. In partnership with Lende, she helped coordinate the list of volunteers for Fullerton. That list has grown to more than 170 names, phone numbers and skills of volunteers to match them with needed tasks.

“When it was clear to me that this was a calamity, all issues that I may have had emotionally or politically dissolved,” she said. “I just came forward with an email to the mayor and acting manager saying, ‘Put me where you need me.’ ”

Town resident Terri Podsiki evacuated from her home Tuesday after geologists and police said the structure was unsafe based on a previous slide. In less than two hours, more than 30 community members showed up to clear Podsiki’s home.

“People that we didn’t even know were showing up,” said daughter Melissa Ganey. A call for help was spread through police dispatch, Facebook and — perhaps most effectively — word-of-mouth.

“My mom was very emotional, but she was emotional because she was like, ‘Why are people being so kind to me?’ " Ganey said. “This is why we live here. It’s crazy how divided Haines can get, but as soon as someone is in need, it doesn’t matter who you believe in and what side of the politics you’re on. You’re there as a community member helping your fellow neighbors.”

On Wednesday, for the first time in days, the rain let up and the sun broke through the clouds in Haines. Alaska State Troopers had called off their search for Simmons and Larson earlier in the week due to unstable ground and an inability to carry out ground searches in the debris area. Many residents — including some of Simmons’ and Larson’s family members — have quietly acknowledged the loss.

Some evacuees were allowed back into their homes Wednesday, and schools opened back up Thursday. Helpers haven’t left, Lende said; they’ve just switched their focus. “Now what we’re dealing with is not life and death,” she said, but rather ways to meet other needs and help the community feel better. Toy donations are coming in from Juneau, she said, and people are volunteering to assemble Christmas trees for displaced families staying in hotels.

“I think it’s amazingly obvious how much everyone in this community loves each other. It’s like, going to the fire hall for the search and rescue and just having 90 people show up there at 6 a.m.,” volunteer and local carpenter Jason Eson said. “I haven’t been able to get anyone to do anything at 6 a.m. for the five years that I lived here. There’s so many people coming out of the woodwork to help in any way that they can.”

Haines Borough Mayor Doug Olerud said Thursday that in the wake of widespread loss, devastation and uncertainty, the road ahead will be a long one.

“I think some of us still have some grief to work through before we can start healing,” Olerud said. But, he added: “We definitely have the assets here to help with that.”