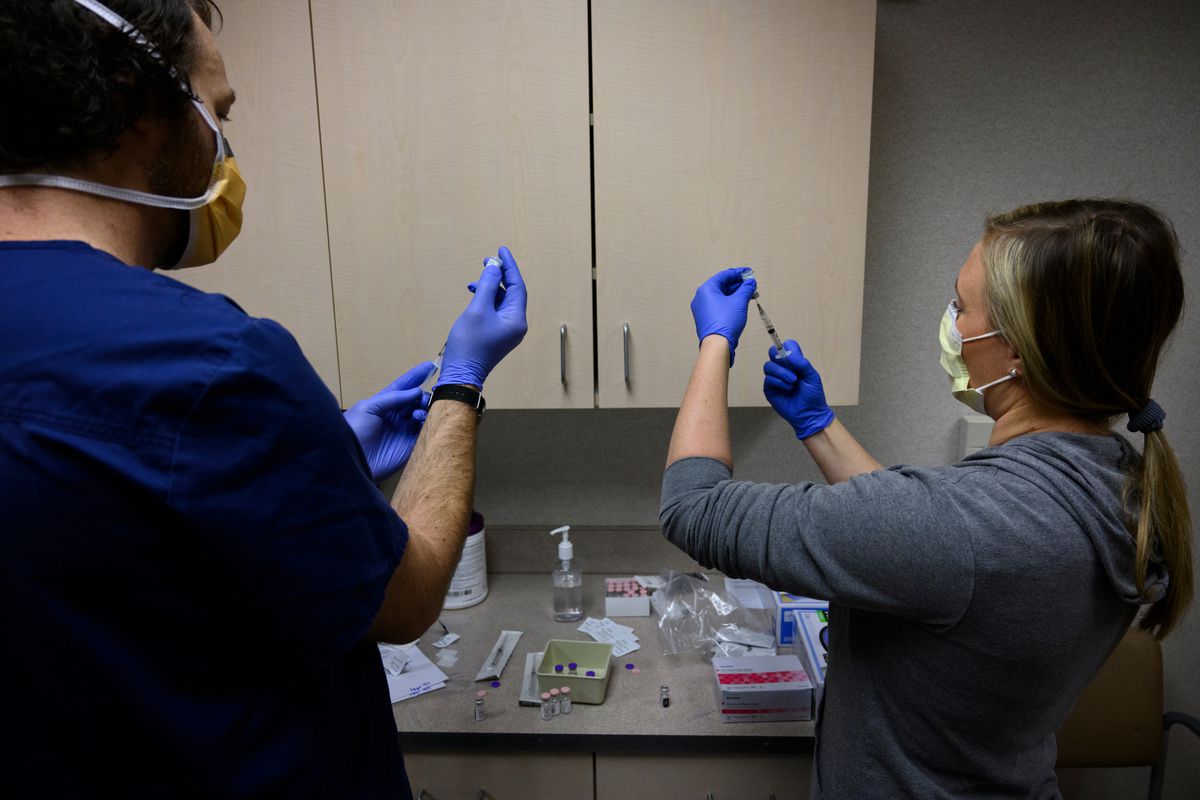 Part of a continuing series.

With some Alaskans now eligible to receive the first COVID-19 vaccine, we’re continuing to answer readers’ virus and vaccine-related questions. Have a question of your own? Ask it in the form at the bottom of this article.

How do the new vaccines work?

The two leading COVID-19 vaccines — by drug companies Pfizer/BioNTech and Moderna, which have now both been endorsed by the US Food and Drug Administration — are new but not entirely unknown messenger RNA (mRNA)-based vaccines.

Vaccines work by teaching the body what a virus looks like so that it can effectively attack the virus if it ever enters the body without making us sick. In many traditional vaccines, this is done by putting a weakened or inactivated pathogen into the body.

But the mRNA vaccine instead uses strings of genetic code for the protein found on the surface of the coronavirus to teach human cells to make the protein. The body’s immune system recognizes that the protein doesn’t belong there, and makes antibodies capable of fending off the novel coronavirus. Our cells destroy the mRNA once it has been used.

Health officials have stressed that while the COVID-19 vaccines will be the first mRNA vaccines licensed in the United States, the technology is not brand new: scientists have been developing and studying the method for more than 30 years.

[Coronavirus Q&A: Can I get the vaccine if I’ve already had COVID-19?]

Access to a COVID-19 in Alaska is currently very limited. Those who are currently eligible for the state’s initial doses of the vaccine are hospital-based front-line medical workers, long-term care facility residents and staff, EMS and fire personnel providing medical services, community health aides and practitioners, and people required to perform vaccinations.

The state’s allocation committee will decide who’s up next beginning as early as January.

There are additional vaccine supplies coming to the state for military members, officials say.

It’s still not known when the general public will be able to get vaccinated, but likely by late spring or early summer.

Can these vaccines alter human DNA?

No. Scientists, doctors and the CDC say it is not possible for the mRNA to enter the nucleus of our cells, which is where our genetic material is kept, and therefore cannot alter human DNA. The cells also break down the mRNA soon after it is finished using the instructions.

“The vaccine does not get into your DNA, and it is incapable of doing that,” said Zink.

Is it possible to get COVID-19 from the vaccine?

No. It is not possible to get COVID-19 from an mRNA vaccine, because they do not use a live virus, said Dr. Susan Bailey, president of the American Medical Association, during a national call with reporters on Monday..

The mild symptoms post-vaccination do not indicate a possible COVID-19 infection caused by the vaccine.

If I’m pregnant or breastfeeding, should I get vaccinated?

Pregnant and breastfeeding women were not intentionally included in the leading vaccines’ trials, which means there is no safety or efficacy data for this group.

But the CDC and FDA have not issued any specific guidance except to say this group may consider taking the vaccine despite the lack of data, and should discuss their individual situations with their doctors to make an informed decision.

Paul Offit, a member of the advisory panel that recommended emergency approval of the vaccine to the Food and Drug Administration, said this week that he agreed with the decision to not actively discourage pregnant and breastfeeding women from getting the vaccine despite the lack of data.

“There’s really no biological reason to think that it would be damaging either to them because they’re pregnant, or to their child,” he explained, noting again that the mRNA vaccine does not contain a live virus.

“The fact of the matter is that (the virus), when it infects pregnant women, can infect them especially severely,” he said. “And so that’s the other side of not getting the vaccine.”

There were about two dozen women in the Pfizer clinical trial who did get pregnant during the course of the study, and none reported any adverse reactions, he said.

The Pfizer vaccine requires two doses, taken three weeks apart. How protected am I if I only get one? What if I miss the three-week mark?

The recommendation for getting the two doses of the Pfizer vaccine three weeks apart has a grace period of about four days after the three-week mark, said Dr. Liz Ohlsen, physician with the state health department.

“And the reason we want people to get it in that window is we want every Alaskan to get this vaccine in the way that it has been studied,” she said.

But if for some reason you fail to get the second shot precisely three weeks after the first, you don’t have to start all over again with another two-dose regimen and can pick up where you left off.

According to the CDC, both doses are necessary for protection; “efficacy of a single dose has not been systematically evaluated,” the agency says on its website.

Still, “We believe that you do get some protection from one shot,” said Dr. Susan Bailey. “It is optimal if you get two.”

Research from Pfizer suggested only about 52% efficacy from the first dose compared to over 90% for those who receive both doses.

How long will post-vaccine immunity last?

It takes about five to six weeks after the first vaccine dose for maximum immunity to build up in the body, scientists say.

While it is not yet known exactly how long immunity conferred by the vaccine will last, most research suggests likely at least a year, said Joe McLaughlin, epidemiologist with the state, during a call with the public on Wednesday.

“We’ll just have to follow the science on this, but I don’t think we’ll know the answer for many months,” he said.

If I get the vaccine, is it still possible for me to spread the virus?

It is possible, yes. While both of the leading vaccine contenders have reported efficacy rates up to 95%, that means about 5% of people who get vaccinated will remain susceptible to COVID-19.

And although the vast majority who get vaccinated will build up a immune response, there’s still a possibility that enough virus could be circulating in the body and passing to others even if you’re not sick, explained McLaughlin.

“So that means that people who have had the vaccine should consider to follow the standard mitigation strategies,” he said.

That means wearing a mask, social distancing and hand-washing until more data comes out, and more Alaskans get vaccinated.

So when will it be safe to visit a family member in a nursing home or assisted-living facility?

With residents of long-term care facilities now eligible to receive the vaccine, Dr. Anne Zink, the state’s chief medical officer, said it would likely be safe soon to visit this high-risk group that has been isolated for months.

Again, it will take about five to six weeks from the time someone receives their first dose to develop maximum immunity from severe illness, so you likely shouldn’t visit right after they’re vaccinated, she said.

Risk assessment is always a personal choice, given that no vaccine is 100% effective, she added.