As groups clamor for vaccine, here’s how Alaska will decide who’s next in line 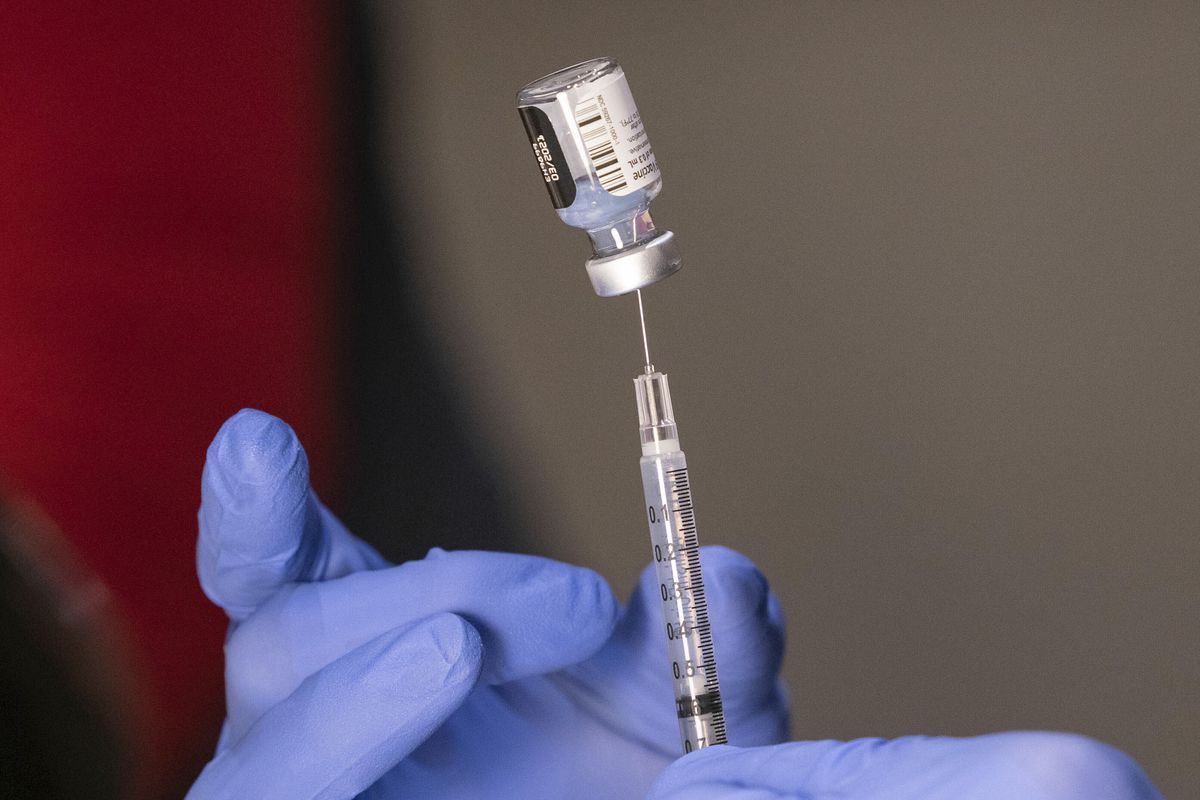 Pharmacist Ron Simono fills a syringe with a dose of the Pfizer-BioNtech COVID-19 vaccine during a vaccine clinic on Wednesday, Dec. 16, 2020, at Providence Alaska Medical Center in Anchorage. (Loren Holmes/ADN)

Pharmacist Ron Simono fills a syringe with a dose of the Pfizer-BioNtech COVID-19 vaccine during a vaccine clinic on Wednesday, Dec. 16, 2020, at Providence Alaska Medical Center in Anchorage. (Loren Holmes/ADN)

The vaccines from drug companies Pfizer and Moderna are being hailed as a game-changing weapon in the fight against COVID-19, which has killed more than 180 Alaskans and infected tens of thousands more.

But for the next several months, there will be far fewer vaccine doses available than people who want to receive them. And that presents the difficult question of who should get the shots first.

GOP Gov. Mike Dunleavy has the ultimate authority to decide, according to officials from his administration. But so far, the state has been heeding recommendations from a new advisory committee largely made up of health care providers, saying they’re best-suited to consider the science and data around the vaccine.

The committee’s initial task of allocating vaccines to different groups of health care workers was narrow, and it has drawn relatively little scrutiny from the general public as the first shipment of 35,000 doses arrives from drug companies Pfizer and BioNTech.

But its work is now entering a more delicate phase as additional doses become available. And letters are pouring in that underscore the stakes of tough dilemmas that some committee members didn’t realize they’d be asked to consider.

Those seeking to assure their place in Alaska’s vaccine line include nonprofits, trade associations and even state agencies.

State legislative leaders want lawmakers and staff to be named essential workers, citing their importance to the state’s economic recovery and the aging Capitol building’s reputation as a “petri dish” for communicable diseases.

The state already considers seafood processing workers to be essential, but companies have asked that they be considered a high priority within that group. They say the virus can spread quickly if it gets into their plants, and that many workers belong to minority populations disproportionately affected by COVID-19.

But what about the truck drivers and warehouse workers who deliver goods to hospitals and nursing homes? They should be considered essential, too, argues the International Foodservice Distributors Association.

Those requests represent just a fraction of those the committee has received so far, and it’s set to solicit more public testimony at a meeting later this month.

Alaskans should know the committee is approaching the job with humanity and sincerity, said Mark Carr, a regional ethicist with Providence Health & Services Alaska and one of the committee’s 24 members. He stressed members are not making value judgments or applying some kind of “moral algorithm.”

“Northing could be further from the truth,” he said. “We’re going to identify a certain part of our structural system that we must keep running, so that we have a society left, so that we have a structure left that allows the groceries to be on the shelf and allows people to drive to the hospital.”

Not what they signed up for

A separate federal committee had recommended front-line health care workers and residents of facilities like nursing homes be the first to get the vaccine, in what’s known as “Phase 1a.”

But the state wanted advice about how to apply the recommendations to Alaska, and help deciding exactly which health care workers should go first, since there wasn’t enough vaccine for all of them.

At a meeting Sunday, the federal advisory committee voted that the next phase, 1b, will include the 19 million Americans age 75 and older, along with some 30 million front-line essential workers in places like schools, grocery stores, prisons and public transportation networks. It also said Phase 1c would include a second, broader group of essential workers, plus adults with pre-existing medical conditions and people ages 65-74.

Alaska’s allocation committee will now have to consider how to translate those national guidelines into state-specific recommendations.

Of several committee members recently reached by phone, all except Carr declined to be interviewed. Kosin said that’s likely because the group’s role has taken on a much higher profile than many of its volunteer members originally anticipated.

“People did not necessarily sign up for that, nor did we foresee it,” Kosin said. “It’s people who are doing rounds in hospitals, caregivers in nursing homes, everyday physicians and others that have jobs that are just coming together to try to help with the public good and give advice.”

Now that the vaccine has arrived in Alaska, the committee has received some two dozen letters about allocation, according to a list provided by Kosin. Advocates for different organizations also spoke at the committee’s first round of public testimony Thursday evening.

Among them were the Office of Children’s Services, part of Dunleavy’s administration, which wants its employees to be considered first responders. The Alaska branch of the American Civil Liberties Union, meanwhile, has asked that prisoners be prioritized, citing the huge COVID-19 outbreaks at state correctional buildings.

Then there’s Coastal Villages Region Fund, a nonprofit that owns Bering Sea fishing rights that it uses to pay for social and economic programs in 20 Southwest Alaska rural villages — some of which have seen huge numbers of COVID-19 infections.

CVRF has asked the allocation committee to recognize the region’s unique challenges, like dense multi-family housing, few health clinics and the lack of piped water and sewer systems in some places. The idea isn’t without precedent: In Tennessee, the state’s draft vaccination plan called for setting aside 5% of doses for areas that score highly on a CDC “social vulnerability index.”

So, perhaps rural Southwest Alaska residents should be vaccinated around the same time as the Alaskans allocated doses because of medical conditions that place them at higher risk of severe illness from COVID-19, said Eric Deakin, CVRF’s chief executive.

“I think most of our communities are at risk,” Deakin said in an interview. “We don’t think population centers should have priority over rural areas when they do this vaccine distribution.”

Committee members are mindful of the challenges faced by rural Alaska, said Carr, the ethicist. But the allocation dilemma remains particularly vexing because Alaskans, and other Americans, are not used to contending with scarce resources, he added.

“It’s not what we do. It’s not who we are,” Carr said. “Alaskans believe that our resources are absolutely unlimited.”

The committee is trying to avoid using the word “prioritize,” because it suggests that members value certain groups over others, Carr said. Instead, the overarching goal of the allocation process is maximizing the health and well-being of Alaskans, said Dr. Anne Zink, Alaska’s chief medical officer.

That’s one reason the initial round of vaccine is going to the people who keep Alaska’s hospitals running, and to facilities like nursing homes, Zink said.

It’s not that those workers and residents are more valuable than others in the health care system, she said.

It’s that if hospitals get overwhelmed because staff are sick, deaths among the general public start to climb much more quickly, Zink added. Vaccinating nursing home residents means that fewer of them will end up severely ill and burdening hospitals, too, and it will allow the state to refocus its virus testing efforts away from those facilities and toward places like schools and restaurants, she said.

Nonetheless, Zink acknowledged many Alaskans are unlikely to be satisfied with the state’s allocation decisions.

“I wish I had better words to comfort Alaskans, to say that we’re trying to do this as fairly and equitably as possible. But it’s an impossible task, and I know it won’t feel fair to many,” she said. “I completely sympathize with that, and can understand why people would feel that way. But I can’t do much else about it aside from looking at data and science, and trying to be as transparent as we can.”