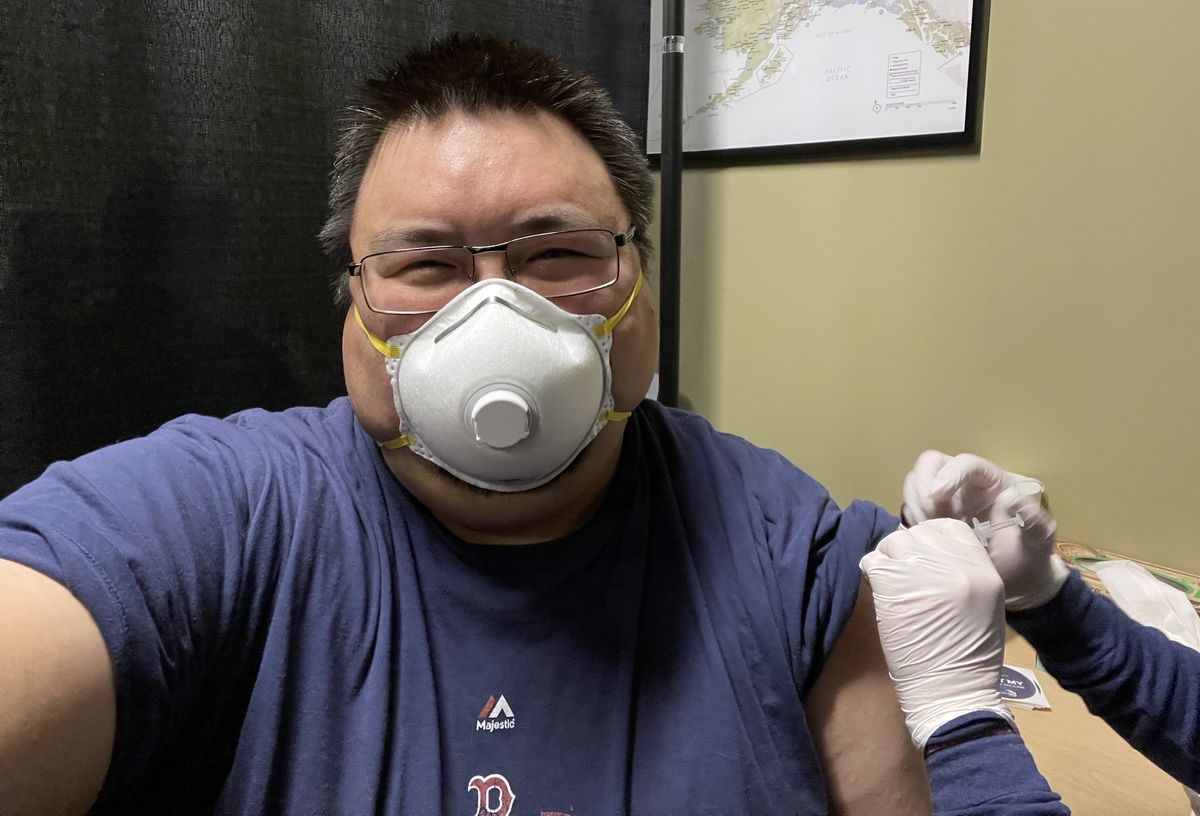 Dave Nicolai, 36, gets a COVID-19 vaccine shot at the Alaska Native Medical Center campus on Wednesday, Jan. 13, 2020. Nicolai, who is Yup'ik and Athabascan, was vaccinated the first day Southcentral Foundation opened eligibility for tribal members it serves who are 18 and up. (Photo by Dave Nikolai)

Dave Nicolai, 36, gets a COVID-19 vaccine shot at the Alaska Native Medical Center campus on Wednesday, Jan. 13, 2020. Nicolai, who is Yup'ik and Athabascan, was vaccinated the first day Southcentral Foundation opened eligibility for tribal members it serves who are 18 and up. (Photo by Dave Nikolai)

The 36-year-old engineer was suddenly eligible for a COVID-19 vaccination through his health care provider, Southcentral Foundation.

As the state’s complex rollout moves slowly through health workers and senior Alaskans, with some stumbles along the way, vaccine for relatively healthy younger people like Nicolai who aren’t essential workers could be weeks or months off depending on the pace of federal supplies.

[‘Things came at everybody really fast’: Inside the sometimes rocky path of Alaska’s COVID-19 vaccine rollout]

But Nicolai is served by the state’s tribal health system, which is giving out vaccinations at a much faster pace.

Tribal authorities are already immunizing everyone from elders to teens in some villages, getting precious vials to far-flung places by plane, boat and snowmachine.

Nicolai, who is Yup’ik and Athabascan, lives in Anchorage with his wife and young children. They’ve been “isolating pretty hard” through the coronavirus pandemic, which hit Alaska in March. He said he has high blood pressure and could stand to lose some pounds, both risk factors for more severe cases of COVID-19.

Nicolai got his first of two doses of vaccine Wednesday morning on the Alaska Native Medical Center campus.

“Getting the shot definitely felt like this huge emotional weight lifted off my shoulders,” he said Thursday.

The Trump administration’s vaccine rollout strategy, dubbed “Operation Warp Speed,” set aside a share of vaccine for the Indian Health Service in a bid to recognize “the sovereign authority of tribal nations to provide for the welfare of their people,” according to a statement from the U.S. Department of Health and Human Services.

In Alaska, that means the almost 115,000 doses of Pfizer and Moderna vaccine received by the state so far include 36,800 doses for tribal members. The state’s military and veterans are also receiving separate allocations of vaccine through the U.S. Department of Defense and Department of Veterans Affairs.

Before the rollout started, however, the state’s chief medical officer, Dr. Anne Zink, had to fight an eleventh-hour push by the Trump administration to have the tribes’ share count against Alaska’s total, according to a report by Alaska Public Media.

The separate share of vaccine reflects the disproportionately high rates at which Alaska Native and American Indian people get severely ill or die from the virus, health officials say.

Alaska was one of 14 states that provided data showing Alaska Native or American Indian people were nearly twice as likely to die from the virus as white people, and 3 1/2 times more likely to test positive, according to a Centers for Disease Control and Prevention report published last month.

Of the 225 Alaskans who have died with COVID-19 since the pandemic began, nearly 40% of them were identified as Alaska Native or American Indian people, according to state data. Alaska Natives make up only about 16% of the state’s population.

The trauma from the 1918 Spanish influenza pandemic still echoes in rural Alaska, where the disease decimated the populations of entire villages.

[An Alaska hospital executive downplayed the COVID-19 threat in an email to staff. She’s no longer on the job.]

The vaccine is an equalizing force for medically underserved rural communities or those without running water and the potential for the virus to invade multigenerational housing and spread quickly, providers say.

“When the COVID-19 pandemic gets into small communities it has potentially more devastating effects,” said Dr. Elliot Bruhl, chief medical officer for the Juneau-based SouthEast Alaska Regional Health Consortium, a nonprofit that serves all residents including tribal members in nearly 30 communities. “It has a higher attack rate.”

[New Alaska data reveals race a factor in likelihood of getting COVID-19, and in its severity]

While many tribes in the Lower 48 opted to get vaccine directly from the Indian Health Service, Alaska’s tribal health organizations opted to receive theirs via the state.

“The tribes decide who they’re going to, what priority group they’re going to,” Zink said. The state just acts like a delivery service, making sure the right amount of vaccine gets shipped where it needs to go.

On Wednesday, Southcentral Foundation opened vaccine eligibility to Alaska Native or American Indian people it serves who are 18 and older. The health provider serves tribal members in Anchorage and Mat-Su, plus nearby villages and also supports 55 villages from the Canadian border to the Aleutian Chain and Pribilof Islands.

Interim president and CEO April Kyle said in a statement that the organization has been working closely with the state to fully distribute all of Alaska’s current supply and was “thrilled to be able to offer vaccines to more and more people.”

The Yukon-Kuskokwim region has held the state’s highest case rate since the fall.

Tribal health provider Yukon-Kuskokwim Health Corp. this week started vaccinating anyone 16 and older. Bethel residents 50 and older and people in congregate settings such as shelters and the Yukon Kuskokwim Correctional Center are also eligible.

Initially, in the first few weeks of vaccine arrival in December, about a third of eligible health care workers and elders decline to be vaccinated, according to YKHC spokeswoman Tiffany Zulkosky. But since then, some have changed their minds “and interest continues to increase,” Zulkosky said.

Arctic Slope Native Association is vaccinating elders who make appointments as are a number of other tribal health authorities around the state.

Nicolai got vaccinated in a distinctly urban setting — a big conference room that allowed for plenty of social distancing.

His wife isn’t generally isn’t eligible for care at Southcentral Foundation. So for now, even with that first dose in his arm, the family will continue to exercise care and stay in as much as possible.

“We still have to wait for the state system to figure out when she can get vaccinated,” Nicolai said. “At some point in the future, it’ll all be OK. But it definitely feels more tangible now.”