‘Incredible’ recovery: After nearly 50 days in a Seattle hospital, this COVID-19 patient is going home to her kids in an Alaska village 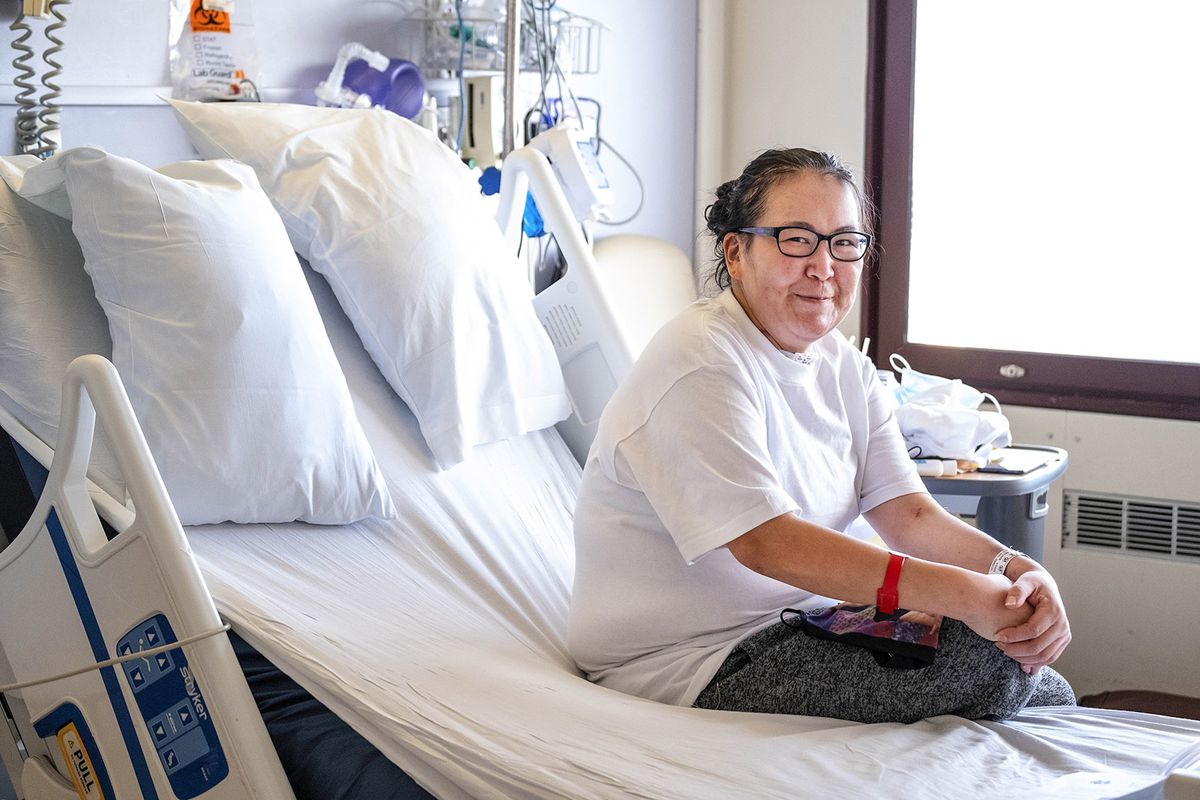 Nastasia Xavier contracted Covid in her small town in Alaska at Thanksgiving, and has been in hospitals in Alaska and Seattle ever since. She wears a mask she made herself of her two children - Leona, 13; and Sasha, 5 - to remind her of the family she has left behind. She's due to begin her journey home Thursday, Feb. 4, 2021. (Photo by Dean Rutz / Seattle Times) Photographed February 3, 2021 216300

Nastasia Xavier contracted Covid in her small town in Alaska at Thanksgiving, and has been in hospitals in Alaska and Seattle ever since. She wears a mask she made herself of her two children - Leona, 13; and Sasha, 5 - to remind her of the family she has left behind. She's due to begin her journey home Thursday, Feb. 4, 2021. (Photo by Dean Rutz / Seattle Times) Photographed February 3, 2021 216300

SEATTLE — Nastasia Xavier has developed a routine: She exercises with physical therapists during the day. She talks to her family on the phone and sometimes watches TV. But most days, she spends large swaths of time enjoying the view from her hospital window.

Xavier — a 33-year-old mother of two who lives in Pilot Station, Alaska — has been hospitalized with COVID-19 at the University of Washington Medical Center for nearly 50 days.

She started feeling sick near the end of November, she said. On Nov. 24, she tested positive for coronavirus and on Thanksgiving was admitted to Yukon-Kuskokwim Health Corp. hospital in Bethel.

It was the sickest she’s ever felt.

Xavier was in Bethel for about three weeks, but her condition didn’t improve. Her medical team wondered if she should be transferred to a larger hospital in Anchorage.

In mid-December, doctors in Alaska put her in a medically induced coma, which is a common practice for extremely sick patients with pneumonia, said Dr. Kevin Patel, the medical director of UWMC’s medical intensive-care unit.

She was out for weeks, said Patel, who was the attending physician involved in Xavier’s initial ICU care.

On Dec. 17, she was airlifted to Seattle.

“She was very, very sick with multiple complications of COVID-19 pneumonia, which really led to many of her organs failing, notably her lungs,” Patel said, later adding that she was also battling kidney and heart damage. “Certainly most people with this amount of organs affected by COVID-19 are at extremely high risk for short-term mortality.”

Her UW medical team put her on dialysis and ECMO — extracorporeal membrane oxygenation — support shortly after she arrived in Seattle, Patel said. ECMO machines, which he said are used by just a handful of health care centers in the Pacific Northwest, pump blood outside the body to a heart-lung machine that removes carbon dioxide and sends oxygenated blood back to the body.

The treatment, which UW Medical Center has used for years, is usually applied to the minority of patients because it’s a high-risk procedure still relatively new for those with COVID-19, Patel said.

In Xavier’s case, however, she was also suffering additional complications of right ventricular heart failure, which required her medical team to implant a right ventricular assist device, or RVAD, near her heart to help it pump blood.

Her team monitored her condition for weeks, hoping their efforts would help her stabilize.

When she finally opened her eyes on Jan. 7, she thought she was at the hospital in Anchorage.

“When they told me I was in Seattle, I was like, ‘Holy cow,’” she said, laughing. “I’ve never been to Seattle before.”

Since then, Xavier has been working with physical, occupational and speech therapists, Patel said.

While she was feeling better when she woke up, she said, her family — her parents, younger brother and two daughters — was all back at their home in Pilot Station. She felt completely alone, she said.

The family has faced a difficult few months.

Her older brother died from COVID-19 on Nov. 25, a day before Xavier was hospitalized in Bethel. Then, her parents and her younger daughter — 5-year-old Sasha — tested positive for the virus, though they didn’t experience serious symptoms.

Thankfully, Patel said, Xavier has made significant improvements since she woke up in Seattle — and will be discharged Thursday afternoon.

“It’s really an incredible story,” Patel said, noting how rare it is for such a young and relatively healthy patient to be hospitalized in the ICU with the illness caused by the new coronavirus. With multiple complications from COVID-19, Xavier was near death, he added.

“It’s so rewarding to see somebody get through,” Patel said.