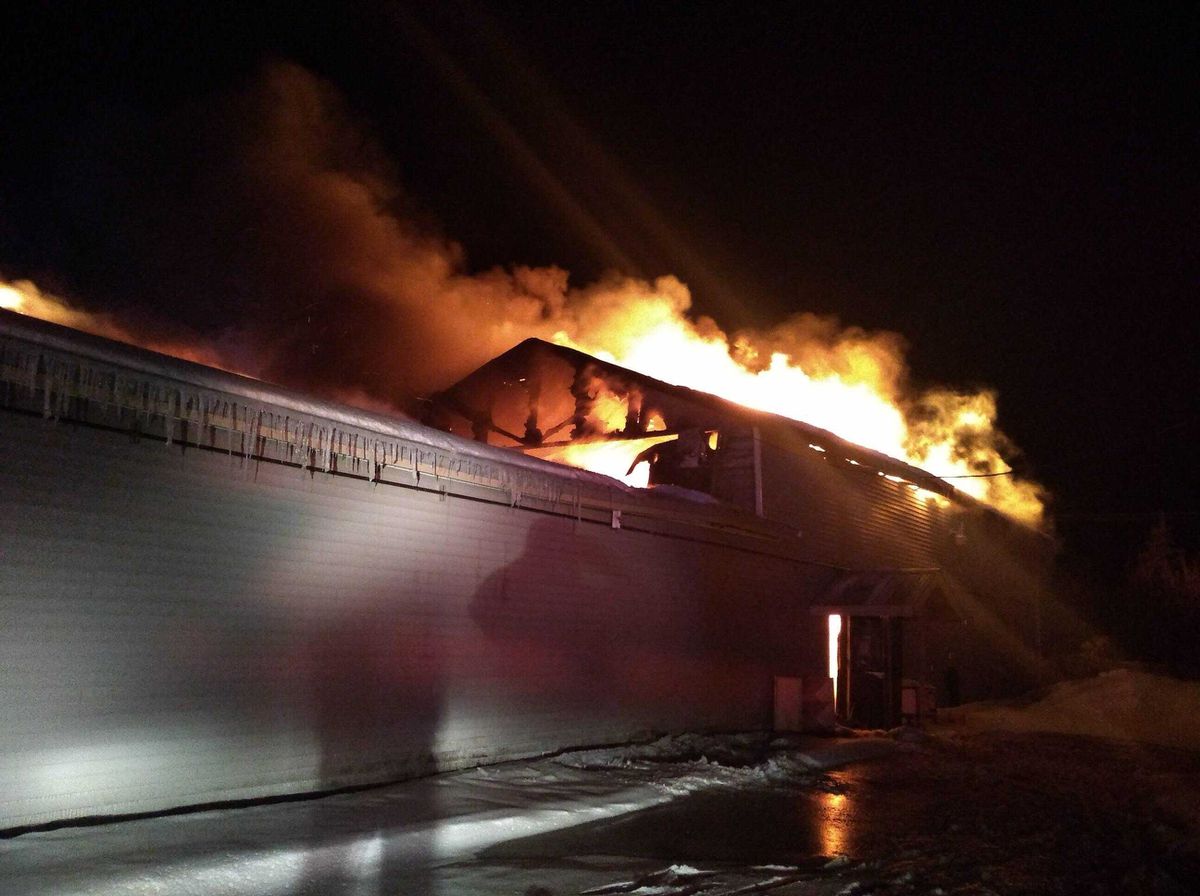 The Triumverate Theatre in Kenai caught fire in the early hours of Saturday, Feb. 20, 2021. The building was a total loss. Photo by Joe Rizzo

The Triumverate Theatre in Kenai caught fire in the early hours of Saturday, Feb. 20, 2021. The building was a total loss. Photo by Joe Rizzo

By the time Joe Rizzo reached the Triumvirate Theatre in Nikiski early Saturday, he could see flames pouring from the back of the building where his office sits, he said.

By the time the blaze was under control, Rizzo, who is president of the nonprofit children’s theater, said the entire building was destroyed.

“The thing with fires is that, when you have a flood or an earthquake, there are things that can be salvaged,” he said. “But with fires it’s just like everything kind of evaporates, like it never even existed. ... There’s really only one corner of the building where it’s even recognizable as things inside. In the theater, the backstage is just like charcoal.”

Firefighters from Nikiski, Kenai and Soldotna were called to the theater around 3:15 a.m. after a driver on the nearby Kenai Spur Highway reported seeing the fire, troopers said in an online statement.

A big heartfelt thank you to our first responders who came from all corners of the Central Peninsula to fight the fire.

Rizzo said he’d received a call from a friend about the fire and managed to get to the building about 10 minutes after firefighters arrived.

“It was surreal to watch something like that, that you’ve worked on with the community for 10 years and in a matter of a couple of hours it’s just gone,” he said.

Board members helped purchase the current location in 2007, which Rizzo said was formerly a mechanic’s shop. Rizzo said remodeling the building was a community effort — students from the shop class at Nikiski High School helped to craft some of the building and volunteers poured their time into the work.

“We spent six years in that building, basically taking it from this kind of derelict mechanic shop to a pretty classy performing arts center,” he said.

The theater has adapted throughout the last year to the pandemic, moving performances to the radio to keep shows going. Rizzo said the group’s last performance highlighted mental health challenges during the past year.

The Triumvirate Theatre board is indescribably cheered by the outpouring of well wishes, pledges to volunteer and offers...

Troopers estimate the loss to be near $500,000, and said the cause is under investigation by the state fire marshal’s office.

Although much is uncertain, Rizzo said he would like to see the theater rebuilt. The theater did have insurance, and Rizzo said he and other board members are meeting Monday to discuss the details of what may be covered and what to do moving forward.

Although the theater is gone, Rizzo said he feels lucky no one was inside the building and that no one was injured. Firefighters were able to keep the flames from reaching other nearby buildings, he said.

Rizzo said the community support has been uplifting. People have been driving by and, on Sunday, a bouquet of roses sat outside the building.

“There’s a lot of people that are just devastated by this,” Rizzo said. “It’s not just the board members and those of us that work with people at the theater, but every mom and dad that’s ever had a kid standing on the stage to perform, really feels this in their heart.”