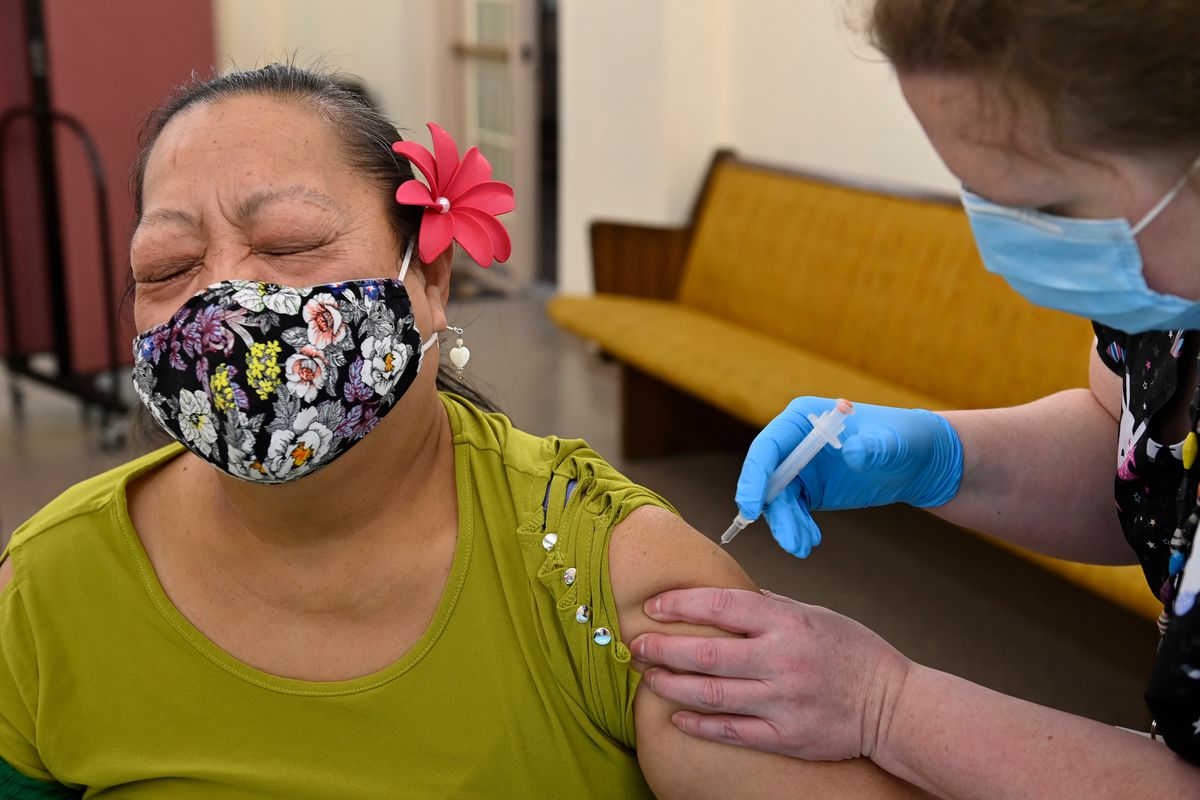 Lusiana Hansen, the CEO and founder of the Polynesian Association of Alaska, gets a COVID-19 vaccine injection from Anchorage Public Health Department nurse Amy Doogan at Manai Fou Assembly of God Church in Anchorage on February 23, 2021. (Marc Lester / ADN)

Lusiana Hansen, the CEO and founder of the Polynesian Association of Alaska, gets a COVID-19 vaccine injection from Anchorage Public Health Department nurse Amy Doogan at Manai Fou Assembly of God Church in Anchorage on February 23, 2021. (Marc Lester / ADN)

Lusiana Hansen knows too well the toll COVID-19 has taken on Alaska’s Pacific Islander community, a group hit harder by the virus and vaccinated less than any other in the state.

Hansen’s family and three others came down with the virus in October. She’s known people it killed.

So Hansen, president and founder of the Polynesian Association of Alaska, watched closely as the state’s vaccine rollout began, starting with health care workers and people in long-term care centers before moving to seniors.

It seemed to her that most in her community fell outside those tiers. As Hansen tried to urge others to sign up for appointments, her efforts fell short. Her people seemed like the last in line.

On Tuesday morning, the 58-year-old Hansen got vaccinated at a pocket clinic targeting Pacific Islanders in the fellowship hall of a Samoan church.

The clinic sprang from an outreach effort made possible with the help of leaders like her.

“Our communities have less access to health clinics, doctors, and also transportation,” Hansen said. “We have asked the city and state to bring vaccine to our people. ... Our people, they gather in churches and congregations. It’s the easiest and the fastest way for us to get the vaccine.”

For the first time since the coronavirus pandemic began, Anchorage Health Department officials say, they opened clinics targeting just one community, a strategy they’ve used in past outbreaks but not this one.

The health department scheduled two mobile clinics on Tuesday and Thursday open to all Pacific Islanders at the Manai Fou Assembly of God church in Airport Heights, a Samoan church.

The clinics were advertised via word of mouth through Pacific Islander channels rather than the usual appointment sites accessible to the public, officials say.

“The minute any appointments go on those, they go like hotcakes. People with time to sit at a computer and refresh get them,” said Christy Lawton, the city’s public health division manager. “In order to make sure some of these other groups get access, we basically created some private clinics. ... We’ll still serve people who are eligible but we’re not getting the message out the same way.”

There are roughly 160 appointments available between the two clinics, officials say.

The targeted clinics are possible because Anchorage health officials now have some discretion as to how they use monthly vaccine allocations from the state, allowing them to do more “pocket allocations” like the Pacific Islander clinics for other populations, too.

“Our charge from the CDC and state is to achieve equity access for Alaskans,” said Dr. Janet Johnston, the Anchorage Health Department epidemiologist. “The strategies to be able to do that have to vary and be as diverse as the people we are trying to vaccinate.”

They were also possible only after Hansen and other community leaders got involved in the process, Lawton and Johnston said.

Alaska holds the nation’s top spot for the number of people vaccinated per 100,000. Almost 20% of adult Alaskans had received at least their first doses of vaccine, including more than 35,000 people 65 and up.

In Anchorage, where the majority of the state’s Pacific Islander communities live, nearly half of people 60 and up have been vaccinated, according to recent municipal health data. More than a third of Alaska Native or American Indian people have been vaccinated, thanks to a separate Indian Health Service allocation for tribal members, employees and household members.

But only about 350 people who identify as Native Hawaiian or other Pacific Islander have gotten at least their first dose, out of more than 144,400 Alaskans total, according to the Alaska Department of Health and Social Services dashboard.

A mix of factors is thought to be the reason for the low numbers — a combination of language barriers, access challenges and resistance to vaccine especially in multigenerational homes where only a few people are officially eligible.

Around the country, people of color are getting vaccinated at lower rates due to a combination of mistrust and access issues. Getting vaccine information from peers is crucial, equity advocates say.

The municipality’s shift in strategy to vaccinate Pacific Islanders marks a nod to the importance of community leaders.

Judy Tanuvasa, a Samoan community leader and RN who is married to the pastor at the Assembly of God church, greeted people at the door of Tuesday’s clinic. A sandwich board sign in the parking area along 16th Avenue read “Tui puipui ole koviti,” which she translated as “to prevent COVID.”

City health workers helped people register for their second doses as they waited 15 minutes for observation after getting their first.

Three people prepared food in the church’s kitchen in the back as island music played on a radio. Deli sandwiches and fruit were among the items offered to people on their way out.

Vauoti Tuga, 46, got a Scooby-Doo themed bandage over the injection site on his tattoo-covered right arm.

“I think everybody should come get theirs,” Tuga said.

As a nurse with Southcentral Foundation, Tanuvasa said she sees a stark difference in how well Alaska’s tribal vaccine allocation system is working in terms of easy access and wide distribution.

That access is missing for people in the Pacific Islander community, she said. “They didn’t have the same availability that the system I work for has.”

She knew Hansen had been pushing people to get vaccinated without much luck. Both got involved with a municipal vaccine planning group recently.

City officials say that’s what opened the doors to this week’s clinics. Church leaders are respected in the community, so Tanuvasa offered the use of the Assembly of God church for the clinics this week.

“Something triggered in my heart and I said, ‘Somebody needs to do something and I think that somebody is me,’ ” she said.

Also helping play a key role in vaccine education in the Pacific Islander community is the Peer Leader Navigator program, a partnership between The Anchorage Health Literacy Collaborative, Providence Alaska Medical Center and the University of Alaska Public Health program.

Started in 2013 to conduct health outreach and education in immigrant and refugee communities in Anchorage, the program has trained more than 40 community leaders representing 20 different language and cultural groups, according to program coordinator Nyabony Gat. The program shifted to COVID-19 assistance, including rent relief applications, last year.

Etevise Macdonald, a young Samoan woman with the program, said she encounters questions about side effects. She tries to explain that vaccinations are generally safe, but also why they’re important.

“I told them if you take this vaccine, we need to bring our economy back, we need to get our lives back ... we go to the store, we do activities with the community, we love to dance in our communities, in our churches,” Macdonald said. “We’re close to each other. Right now, it’s been a year since we don’t do all those things. I know they really want to get back to their lives.”

The ADN’s Marc Lester contributed to this story.

[Here’s who is eligible for the COVID-19 vaccine in Alaska, and how to sign up for a shot]