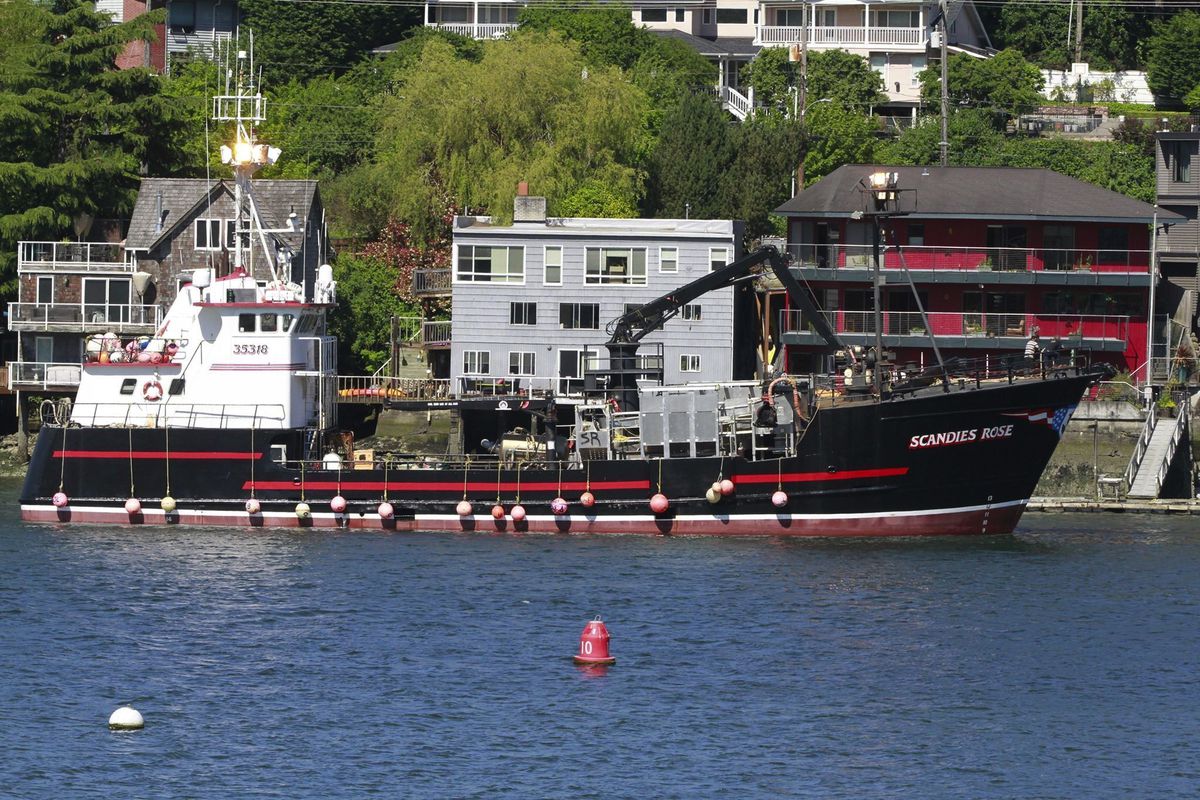 Three Washington state naval architects this week laid out a damning critique of flaws in a federal rule that guides the loading of crab boats amid dangerous, icy conditions off Alaska.

Their testimony came Wednesday during hearings called by the Coast Guard Board of Investigation, which has launched an inquiry into the deadly Dec. 31, 2019, sinking of the Scandies Rose in the Gulf of Alaska. Five of the seven crew were killed.

More than 60 crab boats in this fleet confront some of the North American fishing industry’s most hazardous weather as they pursue snow and king crab. Investigators are now reexamining the assumptions of the key safety rule.

The naval architects said the Coast Guard regulation underestimates how much ice can build up on a boat during cold weather, fails to take into account that it may form unevenly and also ignores the potential for dense ice to freeze solid in the webbed interior of crab pots.

These shortcomings can result in naval architects’ drawing up stability instructions that allow hazardous numbers of pots to be carried during some winter storms.

“I’ve got a hole in my education and my knowledge as to how do the pots really ice ... Can we please do some research and find out what the truth is?” testified Bud Bronson, a Tacoma naval architect.

[‘We are rolling over’: Inquiry into Gulf of Alaska sinking of Scandies Rose crab boat opens with mayday call]

The architects were not involved with the development of the stability booklet for the Scandies Rose, a boat managed in Washington state that went down during a storm that generated National Weather Service warnings of heavy freezing spray. What role an ice buildup may have played in the sinking is unclear, and the Coast Guard is investigating other factors such as the potential for leaks — in an area subject to repeated welding repairs — that could have caused flooding.

The naval architects’ warnings came during the first of two weeks of public Coast Guard hearings in Edmonds to investigate the sinking.

Also Wednesday, Jon Lawler, one of the two survivors, offered wrenching testimony of the final minutes before the boat went under. After donning a survival suit, he exited the wheelhouse amid what he described as sheer panic as the boat tilted crazily and tossed people about. He said another crewman, not in a survival suit, called out for help.

“I couldn’t help anybody,” Lawler said. “There was not enough time to help anybody. Everyone had to help themselves .... There was an opportunity for everyone to get out. It doesn’t make any sense. It’s been ingrained in my brain for ... over a year now. I sleep on it. I daydream about it. I play back over and over and over again trying to change it in my head.”

Lawler, in response to questioning from the Coast Guard board, said that — while on a wheelhouse watch on the evening the boat went down — he noticed only minor icing that did not appear to be a big risk.

“I could have scraped it off with my thumbnail,” he said.

Lawler acknowledged that conditions could change “real quick.” During the chaotic minutes before the boat sank, he noticed ice on the rails but told investigators the situation was difficult to assess.

Lawler was a newcomer to the crew. He said the Scandies Rose had unusual roll as it made its way through the waves. He also described a welding repair that had been done on the vessel to prevent leaks in an area that had been repaired early in the year.

The Scandies Rose sank while traveling from Kodiak to Dutch Harbor with a load of 195 pots, fewer than the 208 maximum allowed in a stability report developed by Washington naval architect Bruce Culver.

Naval architects are key arbiters of safety in the fishing industry, hired by the owners to conduct specialized tests to determine loading of steel-framed pots and other gear under various conditions. When too much weight is piled on deck, boats lose stability and are at risk of rolling over.

Bronson and two naval architect colleagues — Paul Zankich and Jonathan Parrott — had long shared concerns about the federal regulation they were required to use to develop stability booklets. Last year, after the sinking of the Scandies Rose they reached out to members of the Marine Board of Investigation to share those concerns.

The Coast Guard then opted to conduct a simple experiment with a crab pot set on the heavy icebreaker Polar Star during a recent winter cruise.

The experiment was designed to check the weight of ice that formed inside a pot, which would not be accounted for under the federal rule. The pot weighed 1,000 pounds empty. It then was sprayed with a freshwater hose.

After 72 hours of being doused with water from a hose, the pot, partially filled with icicles and other interior ice, was weighed again.

“Unfortunately we were not able to get a total weight, only because the pot maxed out on a scale that could weigh up to 3,000 pounds,” said Capt. Greg Callaghan, as he explained the experiment to the three naval architects during the Wednesday hearing.

During the Wednesday hearing, the three architects said they do add information to their stability booklets to warn captains that icing conditions they encounter might be greater than those cited in the regulation to calculate safe loads. Bronson said he has sometimes imposed restrictions greater than the regulation, but clients may then opt to take their business elsewhere.

The stability instructions developed by Culver for the Scandies Rose did not include any special warnings about the assumptions in the regulation, according to a document introduced as evidence.

[Battling the waves to stay alive: A tale of survival from the Scandies Rose]

In Thursday testimony, Culver’s loading instructions for the Scandies Rose were called into question by Ken Lawrence, a Coast Guard naval architect who did a review that found math errors, problems in models and other issues.

He testified that Culvers’ instructions did not meet federal stability requirements for many different loading conditions, and did not comply with these standards if the boat encountered icing conditions on the night of Dec. 31.

Lawrence also commented on the federal regulatory standards, which his report found did not take into account uneven icing, which he said “likely” occurred on the Scandies Rose and can make a boat more difficult to right itself.

Culver could not be reached Thursday for comment about the Coast Guard review of his work.

Lawler, in his testimony, said he was not happy about leaving Kodiak on Dec. 31 with a full load of crab pots and facing a forecast of a storm and freezing spray.

He hoped the storm would prompt the skipper, Gary Cobban Jr., to delay departure.

“I’ve had people ask me, ‘Why don’t you say something ... that suggests that maybe we shouldn’t leave?’ I always laugh about that,” Lawler testified. “That’s not what you’re hired for. You’re hired from the neck down. " And if “you get the reputation as being that guy” that didn’t have the courage to go ... “that sticks with you and good luck getting a job on another boat ... you don’t do that.”

Later that night, when the Scandies Rose was sinking, Lawler and Dean Gribble Jr. clung to the boat for as long as they could in their insulated survival suits, according to Lawler.

A wall of water washed them overboard.

Lawler paddled backward as hard as he could. The boat sank, stern-first with its bow upright, its metal creaking. “Like a rocket, it was down. Gone,” Lawler said.

They saw no signs that captain and four other crew — David Cobban, Brock Rainey, Art Ganacias, Seth “Sorin” Rousseau-Gano — made it off the boat, according to Lawler.

The two survivors were tossed about in a violent sea.

They both thought they would die but made it to a life raft that had popped loose. They were later rescued by a Coast Guard helicopter.