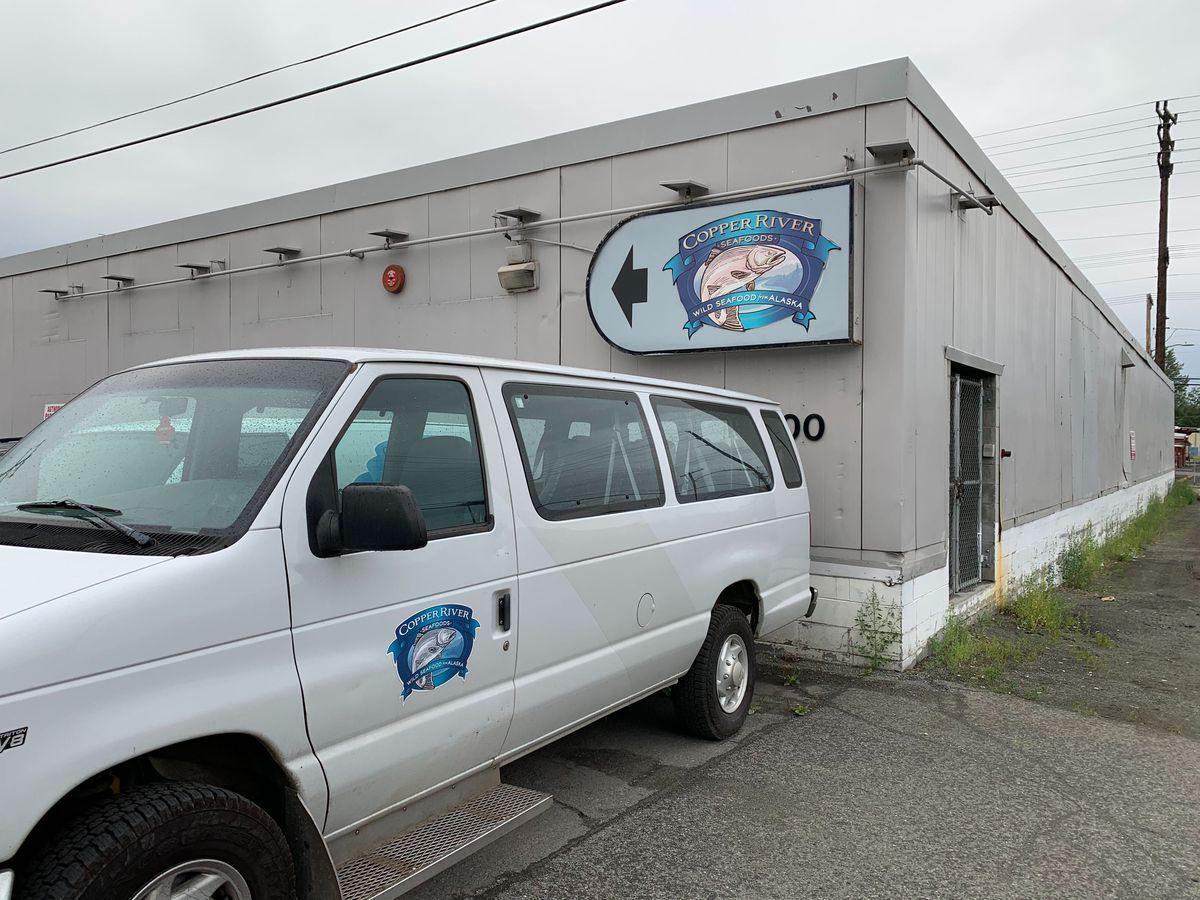 The commissioner of the Alaska Department of Labor personally intervened earlier this year to reject a proposed $450,000 fine against Copper River Seafoods despite an investigation that concluded the company disregarded health and safety regulations.

The investigation was prompted by a COVID-19 outbreak last year that sickened more than three-quarters of the workers at an Anchorage processing plant and sent two people to the hospital. Investigators said Copper River acted negligently with its COVID-19 response and, beyond that issue, accused it of failing to fix known safety problems, including one that caused a man in Naknek to lose his arm during a gruesome conveyor belt accident in 2018.

In a memo issued Jan. 18 and first published by KTOO-FM public media, Commissioner Tamika Ledbetter said she was “denying the request to move forward” with the suggested fines because of concerns “with the way in which the citations were acquired and presented for my review” and problems with the documentation behind some allegations.

Joseph Knowles, director of the Labor Department’s standards and safety division, said there were “missteps” in the way his division handled the complaint and that it “fumbled this administratively.”

In a written statement Thursday afternoon, the company said, “Press accounts have incorrectly made the inference that CRS did something wrong and escaped responsibility corruptly. This is entirely false.”

State law says an employer can only be cited within 180 days of a violation, and Ledbetter’s decision came before an early-February deadline.

When asked why Ledbetter acted earlier than the deadline, Deputy Commissioner Cathy Munoz answered on her behalf in an email, saying, “by mid-January the Commissioner had the information needed to make a determination.”

Critics said that if there were problems on the administrative end, she had time to work those out.

John Stallone was chief of enforcement for Alaska’s Division of Occupational Safety and Health until 2006. Now retired, he said Ledbetter’s intervention is extraordinary. In his decade of work with the department, he never saw a commissioner completely nullify the work of investigators.

“She could have said, ‘OK, I think the COVID (fine) is a little high. Let’s reduce it.’ ... She could have done that with just a stroke of the pen. She didn’t do that. She sat on it for 180 days, so the entire investigation went out the window. They don’t have to fix one damn thing now,” he said, referring to Copper River Seafoods.

Some current members of the Department of Labor have accused the commissioner of wrongdoing and have filed a whistleblower complaint with the federal Occupational Health and Safety Administration.

A preliminary response last month from OSHA said “there is insufficient evidence to conclude that the commissioner or deputy commissioner engaged in any wrongful act,” but the federal agency will examine whether the state followed policies and procedures during the Copper River Seafoods investigation and a similar case involving a different seafood-processing company in Juneau.

Rep. Zack Fields, D-Anchorage, said he plans to hold a legislative hearing on the issue next week.

“I don’t know why she did this thing, which is unprecedented and completely inappropriate, and frankly, dangerous,” he said.

In its statement, Copper River Seafoods suggested that investigators may have provided documents to members of the media and the Legislature because of “disappointment or disagreement” with the decision to not issue a fine.

The state’s investigation began in late July, after the Department of Health and Social Services asked the Department of Labor to investigate conditions at Copper River Seafoods’ Anchorage plant. It was the first time health officials had made that kind of request because of COVID-19.

According to a Nov. 12 memo, health officials were investigating a COVID-19 outbreak that went on to infect 77% of the plant’s employees. After interviewing employees and inspecting the plant on Aug. 7, Department of Labor investigators concluded “(Copper River Seafoods) has repeatedly displayed a plain indifference for the health and safety of its own employees” by failing to provide hand sanitizer, failing to keep employees adequately separated and failing to set up physical barriers between employees.

When employees became ill, Copper River management “dismissed this as being ‘a normal type of sickness’ at the time of the outbreak within the plant,” investigators wrote. When the plant reopened after a two-week closure, “(regulators) documented with photographs, the same deficient workplace protections that contributed to the initial outbreak.”

According to a case file obtained through a public records request, investigators also found “serious” problems with electrical safety, sprinkler systems, forklifts and procedures used to lock down equipment for maintenance. Copper River had been warned about so-called “lockout/tagout” issues before, after a worker’s arm became caught in a conveyor belt at a plant in 2018 and had to be amputated.

“CRS was not ever cited, and so was unable to contest charges that had not been made,” the company said in its written statement. “No government agency is able to assess a fine without a hearing or an opportunity to be heard and present evidence.”

According to case documents, company employees signed a document acknowledging inspectors’ findings, but regulations allow a challenge period only after a company is actually cited and presented with proposed fines. That never happened in this case because Ledbetter rejected the citations before they were issued.

Department of Labor investigators advanced their allegations in two batches: One was related to COVID-19 issues, and the other was related to safety issues. The COVID-19 allegations were sent to Ledbetter for review on Dec. 29 because they represented a “novel enforcement issue,” according to the field operations manual used by health and safety inspectors.

It was the first time the state had considered fining a company for COVID-19 safety issues. Because the Department of Labor had no specific written standards for COVID-19 safety, investigators based their violations on a federal law that says companies have a “general duty” to keep employees safe from harm and cited recommended best practices.

The safety-related complaints not related to COVID-19 weren’t sent to Ledbetter until “on or about January 12,” Knowles said, because of a critical mistake. Officials had believed they didn’t require commissioner approval because they were more typical of the department’s work and the recommended fines were below a $250,000 benchmark. But because both the safety inspection and the COVID-19 inspection took place at the same time, the two batches of fines should have been considered together, not separately.

“We failed internally to follow our own procedures and submit to her both inspections in a single memorandum,” Knowles said.

Ledbetter cited that mistake as part of the reason for rejecting the proposed fines.

“Well, shame on them. That was their mess-up,” said Stallone, the retired safety expert. “But still, there was plenty of time.”

He and several current employees assert that the commissioner had weeks to resolve that problem before the statute of limitations expired. Those employees declined to speak on the record, citing fear of retaliation, but speculated in a whistleblower letter to OSHA that Copper River Seafoods could have received special treatment from the commissioner.

“We are now in a situation where we have observed and documented hazards to employees, but we cannot require the employer to abate these hazards,” the letter stated in part. “In this way, the commissioner is knowingly allowing employees to be exposed to workplace hazards and preventing them from being corrected.”

In its statement, Copper River Seafoods rejected the whistleblowers’ allegations: " Contrary to inferences made in these reports, CRS did not interfere or contact the Department of Labor nor any other member of the administration whatsoever in any attempt to influence its decisions. Any statement that CRS had anything to do with Department of Labor decisions made in this case is false.”

The issue may extend beyond Copper River Seafoods.

Soon after investigating the Anchorage plant, Department of Labor officials performed similar inspections at an Alaska Glacier Seafoods Processing plant in Juneau. That case has not yet been closed, and Knowles declined to discuss it, citing ongoing work. But according to a memo dated Feb. 18, Ledbetter is preparing to dismiss fines related to COVID-19 safety failures at that plant as well.

Correction: Earlier versions of the story incorrectly described the nature of the recommended action against the company. The fines were proposed, not levied. An earlier version also incorrectly said what year John Stallone retired. He retired in 2006, not 2009.