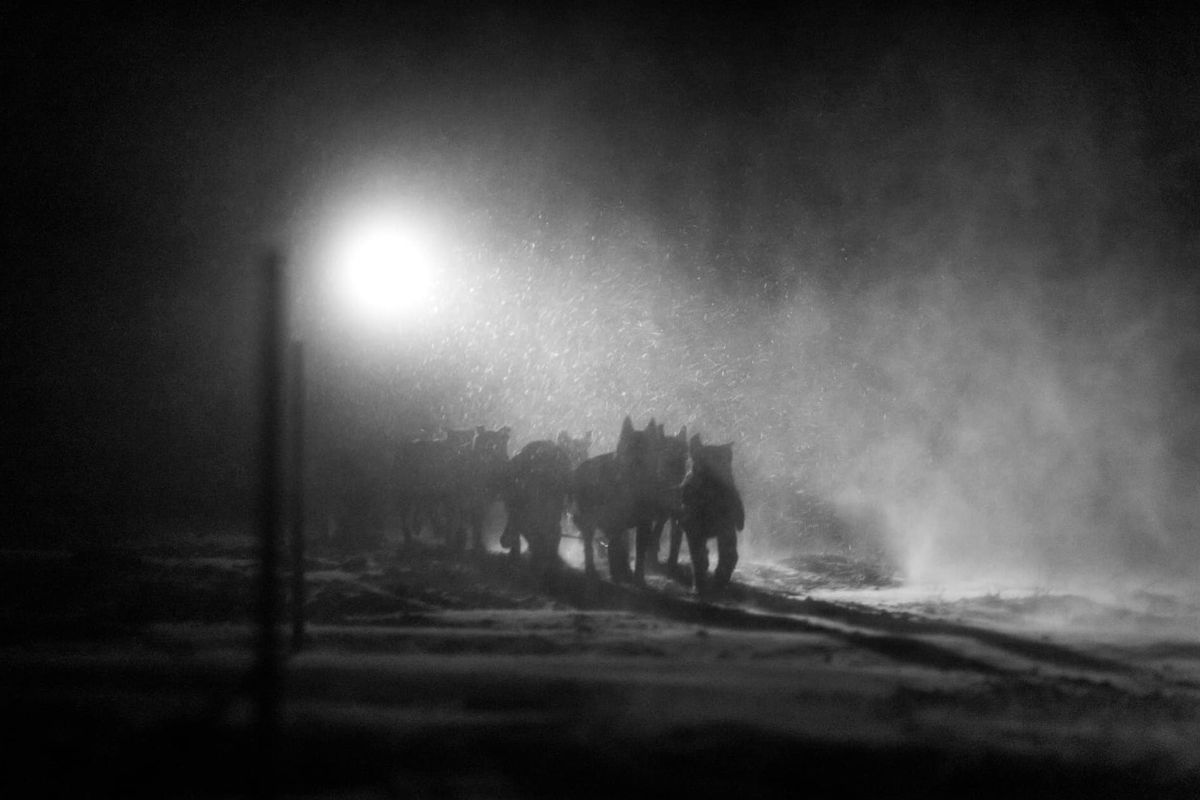 Nic Petit runs in Shungnak during the 2021 Kobuk 440. (Photo by Whitney McLaren Photography)

Nic Petit runs in Shungnak during the 2021 Kobuk 440. (Photo by Whitney McLaren Photography)

The Kobuk 440 Sled Dog Race in Northwest Alaska resumed Monday after dangerous weather paused the race on Sunday and organizers rerouted the course. The conditions caused two veteran mushers, Jeff King of Denali and Nic Petit of Girdwood, to activate their distress signals. Both were withdrawn from the race.

“This feels like the most difficult 440 that we’ve ever had, weather-wise,” said Paul Hansen, president of the race.

The race was originally set to kick off Thursday in Kotzebue, but many mushers had difficulties reaching the town due to heavy winds, fog and frigid weather, Hansen said. The start was pushed to Friday.

“That morning we also had high winds and blowing snow,” Hansen said. “But we were below temperature minimums and felt like we could start safely even though it was bad weather.”

The racers set out from Kotzebue on the 440-mile route that was planned as a loop: heading east through Ambler and Shungknak before reaching Kobuk, then turning back and heading south through Selawik on the return to Kotzebue. Hansen said several local search and rescue groups helped break trail because the snow was so deep this year.

[Weather strands travelers in small planes on glacier near Denali]

Nearly halfway through the race, mushers King, Petit and Ryan Redington were leading the group and were among the first to leave the Ambler checkpoint, Hansen said. From Ambler, mushers reach a checkpoint at Shungnak before getting to Kobuk and turning around to retrace their trail back to Ambler. As several of the racers began their return, conditions intensified.

“It was a ground storm,” Hansen said. “It just started snowing and it reduced visibility to zero.”

Several mushers who had just left the Ambler checkpoint on their way to Kobuk turned back because the conditions were so poor that they were having difficulty locating the trail, Hansen said.

According to Hansen, King and Petit pressed their help buttons between Kobuk and Ambler. King stopped at Shungnak and a search and rescue crew helped Petit back to the trail so he could continue toward Ambler, Hansen said.

As communicated from race officials:
Jeff King and Nic Petit were withdrawn from the race after they activated their trackers outside of Shungnak.

Jeff is running his team to Ambler outside of the race, being tracked for safety purposes.

Officials called for a hold on the race, Hansen said, concerned about conditions over the 90-mile leg of open tundra between Ambler to Selawik. Forecasts called for 30-40 mph winds and blowing snow, he said.

Officials rerouted the race to trace back the trail from Ambler to Kotzebue, and Hansen said time adjustments were made for mushers who had reached the Kobuk checkpoint. Hansen said he cannot recall another time in the race’s 33-year history that officials have had to reroute.

The race resumed at 2 a.m. Monday.

Hansen said he expects the first teams will cross the finish line back in Kotzebue early Tuesday.