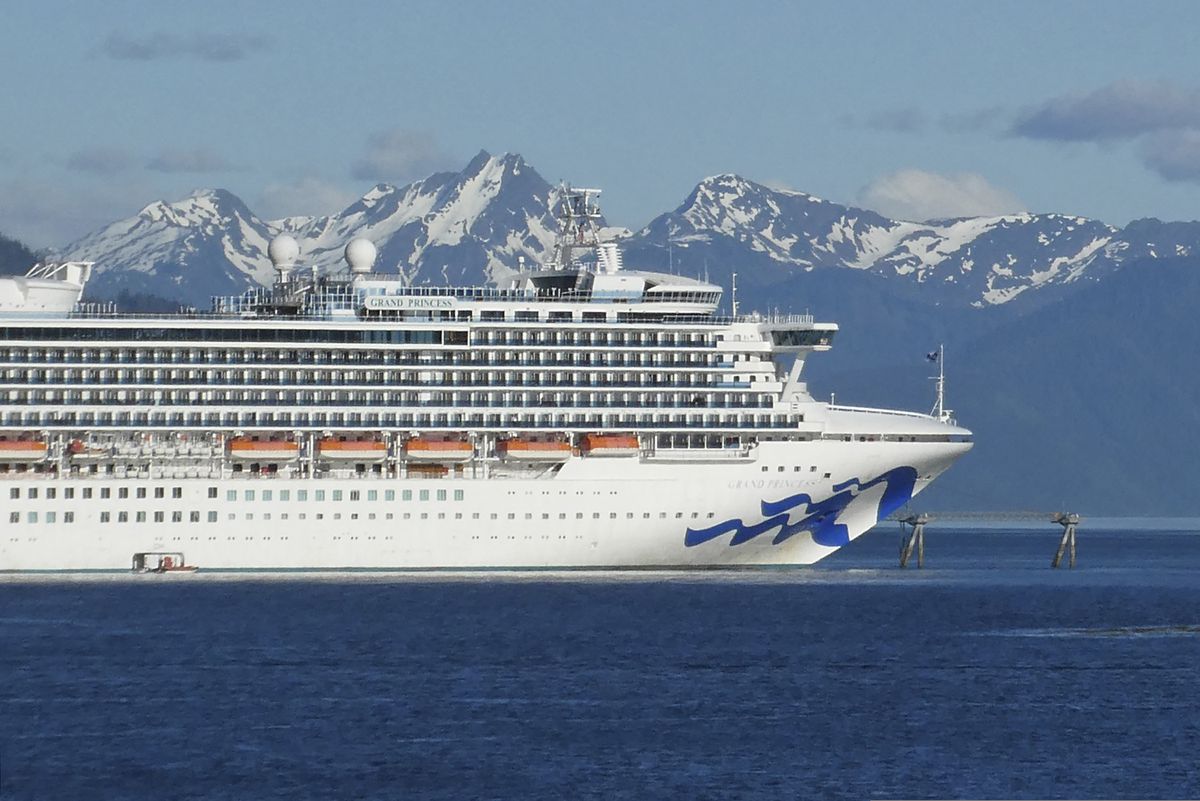 In this May 30, 2018, file photo, is the Grand Princess cruise ship in Gastineau Channel in Juneau. (AP Photo/Becky Bohrer, File)

In this May 30, 2018, file photo, is the Grand Princess cruise ship in Gastineau Channel in Juneau. (AP Photo/Becky Bohrer, File)

JUNEAU — Gov. Mike Dunleavy and the Alaska Legislature are asking the federal government to waive a pair of COVID-related restrictions that will block large cruise ships from visiting the state this year.

Without prompt action, they said Friday, the state will suffer severe economic consequences.

“The simple fact is, this is a live or die moment for the economy of a huge portion of our state,” said Sen. Jesse Kiehl, D-Juneau.

The largest Alaska-bound cruise lines have already canceled their Alaska voyages through the start of July.

Ralph Samuels, an executive with Holland America Line and Princess Cruises and former state lawmaker, estimated that even if COVID-related restrictions were lifted today with a magic wand, “you’d probably be looking at the first of July” for the first large ship.

The longer the current situation goes on, the greater the chance that companies will come up with other plans for their ships and the entire large-ship season will be canceled, he said.

“This is an uphill effort. It was from the start, and time is not our friend,” Kiehl said.

The first is a no-sail order by the Centers for Disease Control and Prevention that applies nationwide.

That order was imposed after cruise ships became incubators for COVID-19 in the early stages of the pandemic. Research subsequently found that cruise ships pose the highest risk for spreading the disease.

The second restriction is the 135-year-old Passenger Vessel Services Act, which requires large Alaska-bound cruise ships to stop in Canada. Because Canada has banned those ships through February 2022, they cannot come to Alaska.

Cruise ships that carry fewer than 100 passengers and ships built in the United States aren’t subject to the ban, but only a tiny fraction of Alaska’s annual cruise traffic comes from ships that meet that criteria.

All of the large ships that come to Alaska were built outside the United States and are not subject to American labor laws, including minimum-wage laws.

The CDC no-sail order is in the process of being phased out, but on Thursday, the state of Florida sued the federal government in an attempt to lift the order more quickly.

On Friday, Dunleavy said the state is considering whether to join Florida in its lawsuit, but it will hold off if the CDC acts more quickly than its current schedule.

In an extended speech, he focused on the need for the CDC to lift restrictions and mentioned the Passenger Vessel Services Act problem only in passing.

Samuels suggested there could be strategic reasons for that.

“If the CDC said, ‘Yeah, they’re good to go,’ you probably have a better, more realistic conversation with the Canadians,” he said.

During stormy weather, cruise ships bound for Alaska sometimes make a “technical stop” in Canada that doesn’t involve pulling up to a dock, Samuels said. Technical stops create other regulatory problems he said, but waivers are possible.

A spokesman for U.S. Rep. Don Young also suggested that if the CDC acts first, it could ease the lifting of the second restriction.

“If — and I stress if — this happens, the Canadians will feel immense pressure to open up their ports to allow technical stops, therefore meeting the requirements of the PVSA,” said Young spokesman Zack Brown.

“Look, I’m the Secretary of Transportation and I can’t wait for us all to be on the move as much as possible in a safe and responsible way. But it’s got to be safe and responsible,” he said when asked during a Friday news conference why cruise ships are held to a stricter standard than airlines.

“I know that CDC is hopeful that a lot of these operators will be in a position to be sailing by mid-summer,” he said.

But even if the CDC restrictions are lifted, Alaska will still face the problems posed by the Passenger Vessel Services Act.

The state’s congressional delegation has introduced legislation that would provide a temporary waiver, and this week, the Alaska Legislature approved a resolution asking President Joe Biden to act if Congress does not.

“I will say that we have been working with Senator Murkowski and Alaska officials on engaging Canada and finding ways to assist to cruise ships,” said Biden’s press secretary, Jen Psaki, in response to a question from the Daily News.

“It is something we are fully aware of, that we are working with your senators on, to help address. We certainly recognize the importance of the cruise ship industry to the Alaska economy,” she said.

In July 2019, the state employed 44,300 “leisure and hospitality” workers. One year later, with summer tourism almost nonexistent, that figure was 28,000. It has since dropped further, and in a report compiled this week, the Dunleavy administration estimated a $3.3 billion impact if the state loses two tourist seasons.

On Friday, Dunleavy said the CDC should lift the no-sail order quickly because the state has performed better than others during the pandemic. Vaccination rates are rising, and Alaska’s hospitalization rates are some of the lowest in the country, he said.

If a COVID outbreak takes place on a cruise ship in Alaska waters, he said he believes the state could use the same procedures employed for COVID outbreaks aboard large fishing vessels. Cruise ships are much larger and have many more people aboard than even the largest fishing vessel, but Dunleavy said many passengers and crew will be vaccinated, limiting the risks.

“Our place is open for business. It’s open for business, because we’ve got the worst of this behind us,” he said. “We know what we’re doing. We’re not just saying this and want you to believe: Look at the data.”

Whether or not the ships come, Dunleavy said the state will embark upon a major tourism marketing campaign to encourage visitors. The advertising campaign would be conducted with federal COVID aid, and details will be released next week, he said.

He said he also intends to announce an aid program for tourism-dependent communities. Lt. Gov. Kevin Meyer has been placed in charge of gathering information about community needs, he said, and he expects to announce additional information later.