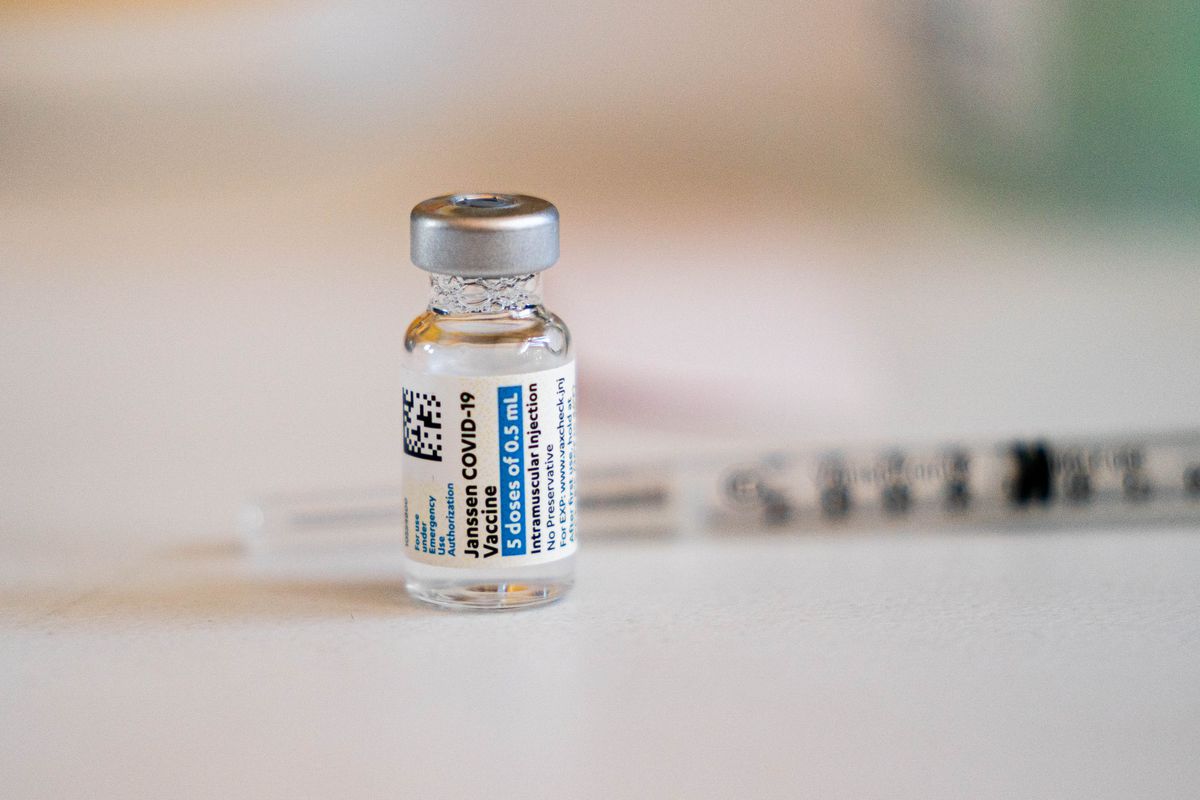 A vial containing five doses of the new one-dose Janssen COVID-19 vaccine by Johnson & Johnson sits on a table at the Our Lady of the Snows chapel during a vaccine clinic on March 19 in Girdwood. (Loren Holmes / ADN)

A vial containing five doses of the new one-dose Janssen COVID-19 vaccine by Johnson & Johnson sits on a table at the Our Lady of the Snows chapel during a vaccine clinic on March 19 in Girdwood. (Loren Holmes / ADN)

“All upcoming appointments with the J&J vaccine are being canceled in Alaska,” state health officials said in a statement Tuesday.

State epidemiologist Dr. Joe McLaughlin said the department takes adverse events seriously and that “this pause is an important part of the process that ensures the safety of the COVID-19 vaccines.”

McLaughlin said officials did not know how long the pause would last, though it’s likely it would last at minimum several days to a week.

“I really want to underscore that these adverse events appear to be extremely rare — about one case per 1 million doses administered have been identified thus far,” McLaughlin told reporters Tuesday morning.

Coleman Cutchins, a clinical pharmacist with the state, emphasized that ibuprofen, a common fever reducer and pain reliever, has a similar risk of bleeding compared with the Johnson & Johnson vaccine.

The Centers for Disease Control and Prevention and the Food and Drug Administration announced that they were investigating unusual clots that occurred six to 13 days after vaccination.

“I’d like to stress these events appear to be extremely rare. However, COVID-19 vaccine safety is a top priority,” acting FDA Commissioner Janet Woodcock said at a news conference.

The clots occurred in veins that drain blood from the brain and occurred together with low platelets, the fragments in blood that normally form clots. All six cases were in women between the ages of 18 and 48. One person died, and all of the cases remain under investigation.

More than 6.8 million doses of the J&J vaccine have been given in the U.S., the vast majority with no or mild side effects.

The FDA said the cases under investigation appear similar to unusual clots that European authorities say are possibly linked to another COVID-19 vaccine not yet cleared in the U.S., from AstraZeneca. European regulators have stressed that the AstraZeneca risk appears to be lower than the possibility of developing clots from birth control pills.

J&J said in a statement that it was aware of the reports of blood clots, but that no link to its vaccine had been established. The company also said it would delay the rollout of its vaccine in Europe as a precaution.

Federal officials said that people who develop severe headaches, abdominal pain, leg pain or shortness of breath within three weeks after receiving the Johnson & Johnson vaccine should get in touch with their health care provider. While heparin, an anticoagulant drug, is usually used for treating blood clots, officials said using it after vaccination might be dangerous and they urged other treatments.

McLaughlin, with Alaska’s health department, said that the risk to those who received the vaccine more than a month ago is quite low.

Officials said they expected the pause would likely drive up concerns surrounding the vaccine. But Tessa Walker Linderman, who leads the state’s vaccination effort, said she hopes the temporary halt boosts confidence in the process and demonstrates that the vaccines are continually monitored.

State health officials said they didn’t know exactly how many people with upcoming Johnson & Johnson appointments will be affected by the pause, though they noted that the impact would be smaller than if the pause had been instituted on the other two vaccines being administered in Alaska due to the much larger quantity of both Pfizer and Moderna doses the state receives.

Anchorage officials said they would pause use of the Johnson & Johnson vaccine Tuesday, stressing that the blood clots were extremely rare and encouraged people to get the Moderna or Pfizer vaccine instead.

State officials said that “anyone who was scheduled to receive the J&J vaccine in Alaska this week should be aware that their appointment will be canceled or postponed.”

Material from The Associated Press was used in this report.