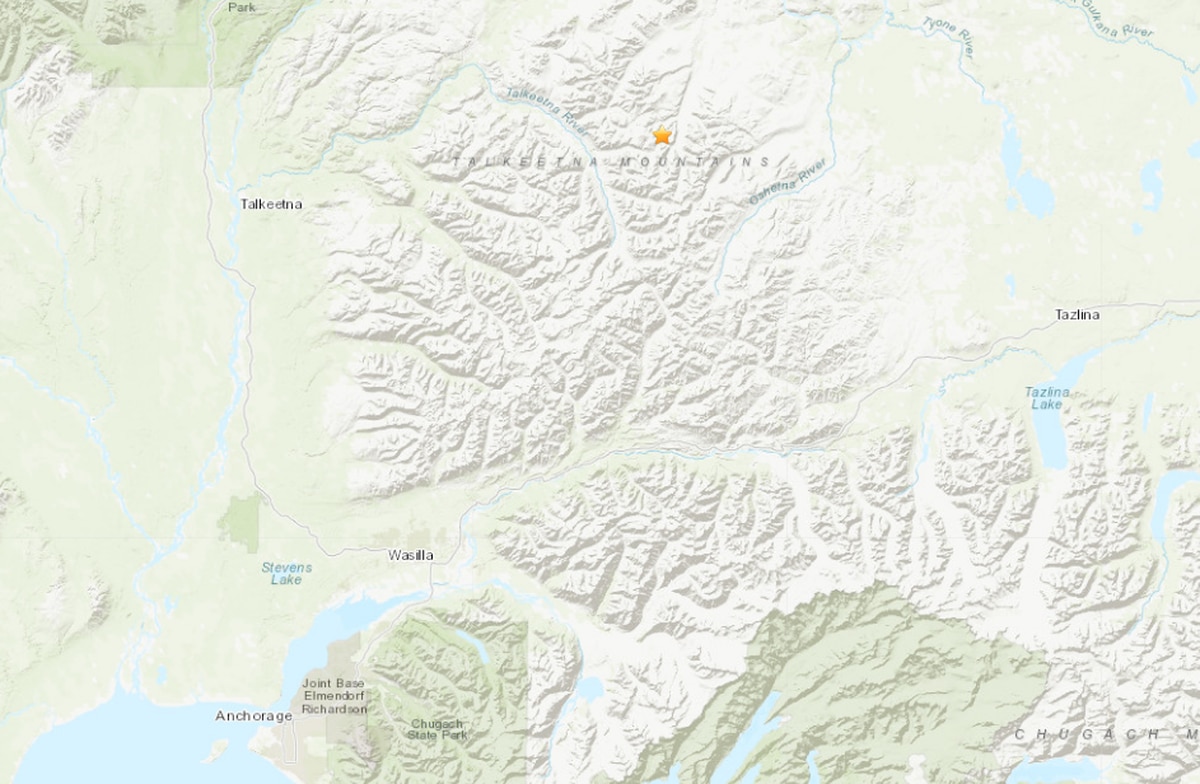 An earthquake with a reviewed magnitude of 6.1 was recorded in the Talkeetna Mountains at 10:59 p.m. Sunday, May 30, 2021. (Screengrab from U.S. Geological Survey website)

An earthquake with a reviewed magnitude of 6.1 was recorded in the Talkeetna Mountains at 10:59 p.m. Sunday, May 30, 2021. (Screengrab from U.S. Geological Survey website)

An earthquake with a magnitude of 6.1 centered under the Talkeetna Mountains in the Matanuska-Susitna Borough shook Southcentral Alaska on Sunday evening.

The quake hit just before 11 p.m. and was centered about 60 miles east of Talkeetna and around 100 miles northeast of Anchorage, according to the Alaska Earthquake Center. It was centered at a depth of about 27 miles. the center reported.

The USGS initially reported the preliminary magnitude as 6.0 and later adjusted the magnitude to 6.1 after review.

The earthquake was felt from Homer to Fairbanks, and was especially strong in the Mat-Su and Anchorage areas. ADN readers on Facebook described items falling off shelves, and many described an extended rolling motion with a sharp jolt midway.

“Talkeetna ... long rumble followed by a very strong jolt that flexed the house and sent some stuff on shelves to the floor,” wrote Mark Westman of Talkeetna. “Then more rumbling. It was a long one. No damage, but the big jolt in the middle definitely rattled the nerves, that one packed a punch.” He later added in a message, “It was notable for the duration as well as the big jolt in the middle.”

Ellen Betts, who lives northeast of Wasilla, said “it started out gently then grew in magnitude in waves ... It lasted more than a minute.”

There were no immediate reports of damage.

According to the Alaska Earthquake Center, the quake was centered 55 miles north of Sutton and 65 miles northeast of Palmer. A number of aftershocks were recorded.

It was the strongest earthquake centered in Southcentral Alaska since the 7.1 quake in November 2018.

Good morning, AK! Many of us may have lingering questions from last night's M6.1 event, so we've posted a news story on our website to help address any add'l thoughts (and share interesting details!). Check it out: https://t.co/jViT9o6OxU pic.twitter.com/f74PraZnhU