For two Anchorage women, a walk in Kincaid Park turned into a terrifying moose attack 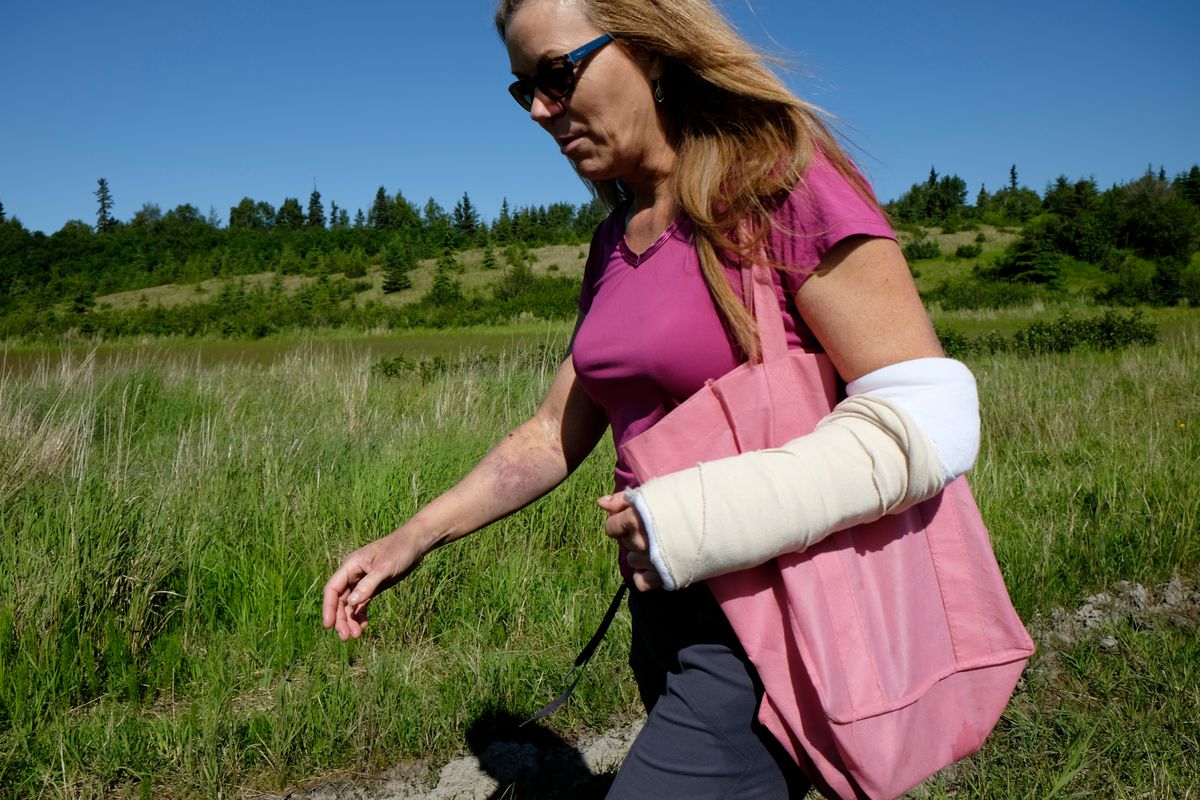 Catherine Dwinnell returned to the area near Kincaid Park where she was attacked by a moose on Friday. Dwinnell’s dog, Molni, ran off during the attack on May 27 and has been lost since. (Marc Lester / Alaska Dispatch News)

Catherine Dwinnell returned to the area near Kincaid Park where she was attacked by a moose on Friday. Dwinnell’s dog, Molni, ran off during the attack on May 27 and has been lost since. (Marc Lester / Alaska Dispatch News)

The women barely saw the moose before it was on top of them.

Catherine Dwinnell and Melanie Sandstrom were walking last Friday afternoon in an area of Kincaid Park that's technically airport land, near a mostly dried-up pond just east of Mile 7.5 of the Tony Knowles Coastal Trail. They were just west of a runway at Ted Stevens Anchorage International Airport.

When a plane isn't landing, you can hear the grass whisper there. But when a jet is coming in overhead, the sound is deafening.

It was a warm, windy afternoon. Dwinnell was strolling as she threw a Frisbee for her dog, Molni. She was wearing bicycle gloves to keep accumulated dog slobber off her hands.

Those gloves would turn out to be important.

At just about 1 p.m., a big FedEx jet approached so close that Dwinnell and Sandstrom reached up to cover their ears. It was then that Sandstrom first saw it: A moose about 10 feet away, in some alders. The animal was agitated.

"I've walked in Kincaid so many times and seen so many moose," said Sandstrom, a former schoolteacher and mother of two who now works part-time as an instructor for a charter school. "I knew this was different."

Instantly her vision was eclipsed by a brown body, she said. The moose was on her "like a truck," Sandstrom said.

Dwinnell, a FedEx pilot, remembers the moment slightly differently. She says the moose hit her from behind before she even saw it. It happened so fast that she had a strange thought: Was the plane's landing gear coming off? Was it knocking her off her feet?

The moose, an adult female that might have weighed in the neighborhood of 800-1,000 pounds, stomped on each of them repeatedly.

They both remember curling up in the fetal position. Feeling hooves on their shoulders, legs, arms, rear ends. They tried to protect their heads.

"It's such a weird experience thinking, 'I'm going to die,' " said Sandstrom.

Molni the dog ran toward the melee.

"Leave Molni! Go!" Dwinnell yelled to her dog. The dog took off. The blue heeler had been her constant companion for seven years. When Dwinnell wasn't gone flying cargo jets, the lively little dog was by her side. They had rambled all over Kincaid Park, but this spot was their favorite.

The attack continued for a period of time both women say they can't quite describe: Forever and no time at all.

Finally, the moose seemed to have left. They both rolled up like potato bugs, facing the mostly dry pond.

"We were so close we could touch each other," Sandstrom said.

She still felt danger. They heard snorting. The moose was back, stomping on them a second time. A blow rained down on Sandstrom's head. The moose stomped on their backs.

Eventually it was quiet.

"I heard Melanie say, 'Catherine, are you OK?' " Dwinnell said.

They inched together and huddled close. Dwinnell looked and saw a huge muscle-deep wound on her leg. She tried to use her bike glove to cover it, but it didn't work. Sandstrom gave her the jogging bra she was wearing. They tied it with a shoelace.

Sandstrom said she knew they had to get out of there. Dwinnell's prescription sunglasses were smashed. She couldn't see well.

The area they were in looked like "the middle of nowhere" to Sandstrom, who hadn't spent much time in that area of the sprawling park. But it was actually close to the Tony Knowles Coastal Trail.

They decided to get out of there. Shot through with adrenaline, they hobbled toward the trail, shouting.

The first to respond was a young European man in a white T-shirt. He said he was a visitor and tried to call 911 but had no idea where he was. Then, a pair on bicycles arrived. One woman said she was a nurse. It was then, Sandstrom said, that she knew everything was going to be OK.

The bystanders — including a doctor from Connecticut and his nurse daughter — stayed with the women and called 911. They took off shirts and sweatshirts and offered them as blankets and pillows.

Dwinnell says her pilot's sense of calm took over. She wasn't getting full breaths, so she forced herself to calm down.

"If I don't calm down, I won't get enough air and I'll die," she remembers thinking to herself.

Meanwhile, paramedics were having a difficult time finding the women.

An initial 911 call came in at 2:16 p.m., but the dispatcher kept getting different reports about where the patients were. Also, the women were located at a point on the Coastal Trail almost exactly the same distance from the two road access points — the Kincaid chalet and a parking lot at the John M. Asplund Wastewater Treatment Facility, near Point Woronzof, said paramedic firefighter Jaime Andersen.

Paramedics ultimately decided to stage themselves at the treatment plant parking lot and drive a emergency response SUV to the scene. But then they reached a bridge on the Coastal Trail west of the airport — the one known as "the blue bridge." They worried the SUV would test the structural integrity of the bridge, which is identical in construction to one that collapsed near Westchester Lagoon in 2014, Andersen said.

They ended up using an ATV equipped to carry out patients to make it to Dwinnell and Sandstrom at 3:16 p.m., according to 911 records.

"It took a long time," said Andersen, who was first on the scene. "A frustratingly long time."

Dwinnell ended up in the hospital with a puncture of the pleural lining of her lung and bones in her wrist broken. She has eggplant-colored bruises all over her arms and one that medical staff told her looks like a hoofprint on her back.

Sandstrom cracked ribs and had a deep laceration on her buttock — a fact that she considers lucky. The moose didn't stomp on any of her vital organs.

The initial news report, based on information from the Anchorage Fire Department, wasn't accurate. The women weren't on bicycles. They weren't on the Coastal Trail itself. And there was only one moose.

The confusion is an indication of how chaotic things can get when fire and police respond to Kincaid Park, Andersen said: Because of spotty cellphone coverage and a large and complex trail map, it's often hard to understand where exactly patients are, and 911 callers have to leave the patient to make the call at all.

It's not clear what happened to the moose.

Two biologists with the Alaska Department of Fish and Game spent an hour at the scene Friday looking for a moose but never found one.

"It really seemed to be a situation where perhaps the women got too close to the moose without realizing it, and the moose for whatever reason felt threatened," department spokesman Ken Marsh said Tuesday.

What, Sandstrom said she has asked herself, could she have done differently? Both women are longtime users of Anchorage trails who have encountered wildlife without incident many times.

Not much, Sandstrom thinks. She and Dwinnell speculate the moose may have either had a calf or recently lost one. Neither saw a calf before or during the attack. Both say they are thankful to the people on the Coastal Trail who helped.

For Dwinnell, the focus is now on her dog, which went missing during the attack. She said she immediately realized Molni was missing once the attack was over. The animal is named after a Russian word for a unique satellite orbit.

Dwinnell has printed dozens of fliers and she and friends are circulating Molni's picture on social media.

There have been two reported sightings since the attack: One on Kincaid's Middle Earth single-track trail and another near Carl Brady Drive, adjacent to the airport off Raspberry Road near Sand Lake Road.

Dwinnell has been back to the scene of the attack twice, first on Monday.

In hopes of luring her dog back to the area, she'd left the blue heeler's taupe dog bed blanket and a small bowl of dry dog food.

On Tuesday she walked down again with a reporter and a photographer. It was another warm day. The grasses were spring chartreuse and the pond was mostly dry. A jet was coming in to land on the runway.

As they approached, they saw a moose. Right in the same place. They walked away, as fast as they could go.