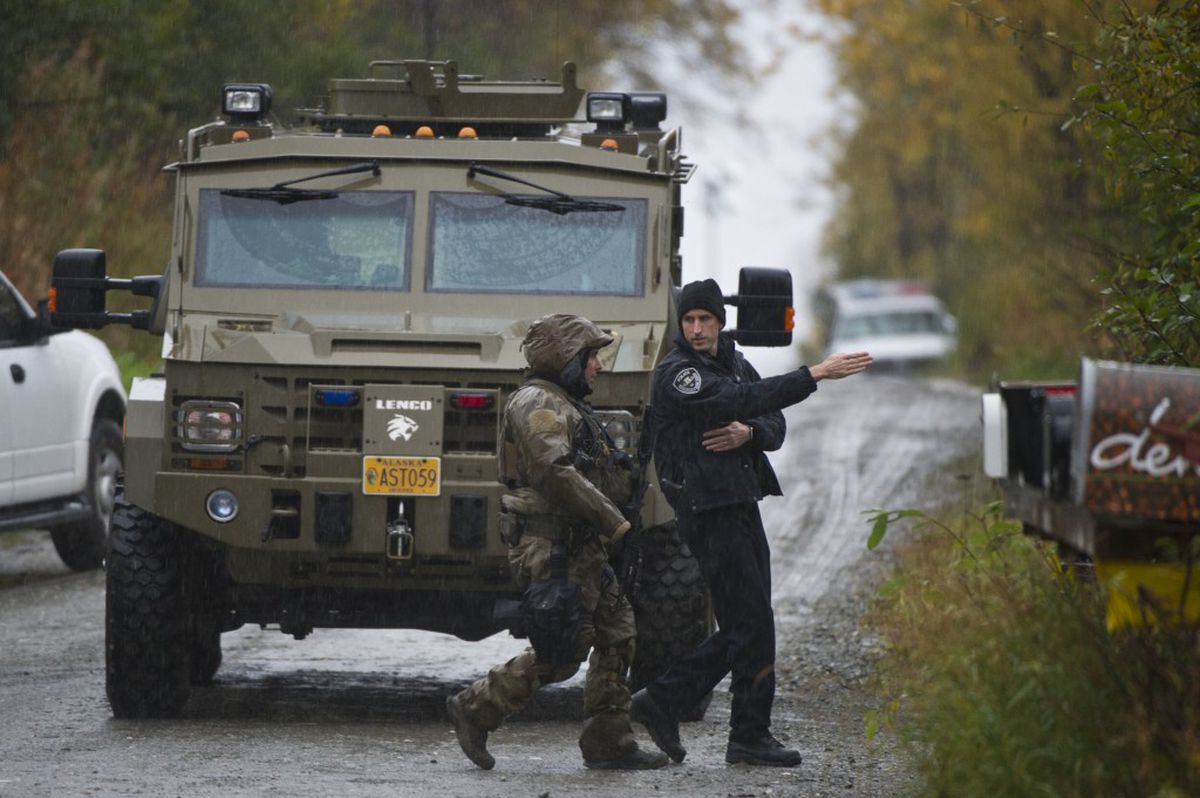 Anchorage police respond to a home on Ginami Street on Thursday morning, September 22, 2016. Police say a Hillside resident opened fire on a tree-trimming crew near his home Wednesday morning and then on police later in the day. (Marc Lester / Alaska Dispatch News)

Anchorage police respond to a home on Ginami Street on Thursday morning, September 22, 2016. Police say a Hillside resident opened fire on a tree-trimming crew near his home Wednesday morning and then on police later in the day. (Marc Lester / Alaska Dispatch News)

NOTE: This story has been updated. Click here for the newest version.

Anchorage police say nobody has been injured in a continuing standoff with a Hillside resident who opened fire on a tree-trimming crew near his home Wednesday morning and then on police later in the day.

Anchorage Police Department spokeswoman Jennifer Castro said the suspect barricaded himself inside the home on the 12000 block of Ginami Street.

"Police have made verbal contact with the suspect who refuses to come out," Castro wrote. "Other efforts have been made to push his peaceful surrender including gas deployment into his home; none of those efforts have been successful at this time."

Castro said police deployed gas into the home on three occasions, the most recent about 10 p.m. Wednesday.

Anita Shell, another police spokeswoman, said that little new was happening at the scene as of 7 a.m. Thursday.

Two members of a Carlos Tree Service crew, under contract to Chugach Electric and maintaining a utility easement for power lines in the area, told police at about 9:30 a.m. Wednesday that the man approached them "brandishing a firearm" and then opened fire.

Negotiators, as well as APD's SWAT team, were called to the home. Police said the man fired on officers as they attempted to deploy gas Wednesday afternoon.

Police closed Ginami Street during their response Wednesday, but Castro said residents are able to reach their homes.

Check back for updates.

A standoff on the Anchorage Hillside dragged on into the early morning hours Thursday after a resident fired a weapon at officers, police said.

The man exited the residence as officers were getting into position to deploy gas and he opened fire, Castro said; no officers were injured.

Police retreated and were figuring out how to move forward with the situation, Castro said around 5 p.m. Negotiators spoke with the suspect in the afternoon, but he refused to come out of the home, police said.

It all started when officers tried to contact the man who they say opened fire on a tree-cutting crew.

APD spokesperson Anita Shell said officers were called to the 12000 block of Ginami Street near Upper Huffman Road just before 9:30 a.m., following a report a crew of tree trimmers was fired upon by a resident in the area.

"He was wanting them to get off his property," Shell said. "He fired some shots, did not strike anybody."

Castro said the shooter had barricaded himself inside his home after the trimming crew reported multiple rounds fired at them.

APD's SWAT team deployed to the scene, according to a Twitter message from police at about 11:45 a.m. Multiple SWAT members in green armor and uniformed officers lined Ginami Street as the standoff continued into the evening on the south portion of the street split by Upper Huffman Road.

Nearby homeowner Robert Bredesen said he came home from a class at the University of Alaska Anchorage around 10:30 a.m. As he crested a hill on Upper Huffman Road, he spotted three police vehicles.

Bredesen thought the officers may have been helping address a utility issue, because there were also utility vehicles in the neighborhood. He left to run an errand and came home to find a large number of police vehicles parked along his street.

He said he was surprised to learn about the standoff, but not worried. More troubling to Bredesen was the robbery in which 36-year-old Joseph Edmund Spindle randomly chose a Hillside home, shot the homeowner and killed a dog before fleeing. That crime happened near Upper Huffman in March.

"Another adventure in the neighborhood," said Ellen Scott, Bredesen's wife.

Smaller crimes affect the area, Scott said, such as vehicle break-ins and mail thefts. The couple said they are still getting to know their neighbors, but overall it's a good place to live.

Shell said it wasn't immediately clear if the workers had actually entered the man's property.

Chugach Electric spokesperson Julie Hasquet said the crew fired upon was from Carlos Tree Service, under contract to conduct right-of-way clearance for Chugach along power lines in the area. The work was unrelated to Chugach efforts to restore power in various parts of South Anchorage, Spenard and Girdwood after an overnight windstorm.

"The notification process includes mailing letters to the homes in the area of the right-of-way clearing well in advance of the work," Hasquet wrote in a statement. "Chugach and its contractor have a long history of working well with homeowners to inform them of the need to keep rights-of-way clear."

Hasquet said crews clear rights-of-way, which can cross other properties, on a year-round basis.

"It's critical for us to keep right-of-ways clear so we can get into areas during events like outages," Hasquet said. "We don't clear trees from your property; we clear the right-of-way."

Police had initially asked people to avoid the area. Drivers should be able to travel along Upper Huffman, Castro said, but by late Wednesday Ginami Street remains blocked off by police at its north and south ends.