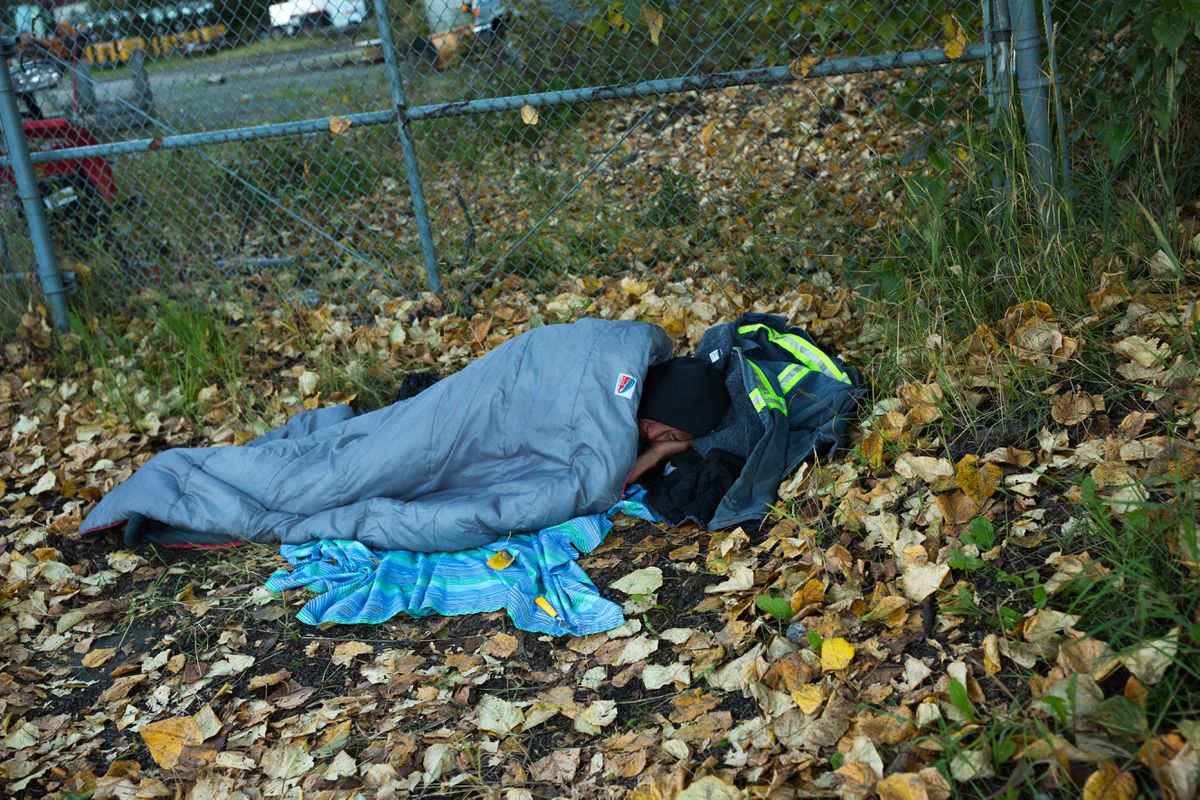 The city of Anchorage and a handful of social service agencies are working on a new system for sharing information about homeless adults and families.

It could significantly change how the city's homeless are housed, treated and tracked.

In the coming weeks, a computerized list of names will be shared between agencies, as well as photos, Social Security numbers, case manager details and histories of incarceration, substance abuse or mental illness. Each homeless person gives up information voluntarily by signing a release form, which has been circulated through camps and homeless shelters in recent weeks.

Anchorage agencies that interact with homeless adults and families have for years entered client data into a computer database to meet requirements of the U.S. Department of Housing and Urban Development. It's helped the city produce bulk, anonymous data on the number of homeless in Anchorage.

But that system was always closed. Until now, Anchorage's agencies have worked in silos, unable to see where else a client had gone for help. There has been no equivalent of an electronic health record for the homeless.

In August, the city of Anchorage, the Anchorage Coalition to End Homelessness and 12 agencies — offering services from housing, re-entry programs for prisoners, substance abuse treatment and support for HIV/AIDS patients — signed an agreement to start sharing information on the database for the first time.

A similar system has operated in the Mat-Su Borough for years. Carmen Wenger, director of the Anchorage Coalition to End Homelessness, noted that while the Mat-Su agencies are organized under a single umbrella organization, Anchorage's agencies have long worked independently.

The idea behind data-sharing is to move homeless people through the system faster. Each person is supposed to spend less time going from program to program to find the right services.

At the same time, the data can be used to make policy decisions, like the number and type of facilities to build.

"This will really allow Anchorage to better prioritize assistance to those that are most in need, but also build and develop better programs and physical housing," said Brian Shelton-Kelley, director of community development with NeighborWorks Alaska, one of the signers of the agreement.

According to the Coalition to End Homelessness, it's been used by more than 70 programs in more than 30 different social services agencies. But the agencies didn't talk to each other about who was using services, so there wasn't necessarily a way to know if someone actually got help after a referral, Shelton-Kelley said.

As a result, the system has largely worked this way: A person becomes homeless and it's up to him or her to figure out where to get help.

That's a daunting task, even more so if that person is struggling with poverty, alcohol or drug abuse or mental illness.

Officials said that's led to a system too often paralyzed by blind spots and shortfalls in accountability. The flow of money, meanwhile, was always geared toward individual activities and agencies, instead of an overall system aimed at moving people from the street to an apartment.

There's also been concern about people taking advantage of the blind spots. Jamon Morgan, director of programs for the small affordable housing nonprofit Shiloh Community Housing, said his agency wanted to be able to alert each other if someone appeared to be gaming the system.

The traditional closed-data approach is now considered inefficient by homeless advocates and prone to unnecessary duplication of services. A few years ago, the federal government began a push to change.

In July 2014, the U.S. Department of Housing and Urban Development issued a notice to grant recipients that it planned to start requiring what's called the "coordinated entry" system for federal funds — the idea of ranking a community's most vulnerable and bringing services to them.

At that time, the city of Anchorage managed the computer database that agencies used to enter data about homeless clients.

Last year, the city gave up the management to the Anchorage Coalition to End Homelessness, which then contracted it out to a Des Moines, Iowa, nonprofit, the Institute for Community Alliances.

Alissa Parrish, the Alaska system administrator for the Iowa nonprofit, said agencies in her state started sharing data more than two years ago and her organization has led the transition for several other states.

In working with Alaska, Parrish said she heard a lot of concerns about HIPAA, the federal privacy law for medical records, and patient confidentiality. She said the concerns about data breaches weren't well-founded.

"The system itself is more secure than, for example, my online bank account," Parrish asserted.

An unofficial list of names has been the focus of weekly meetings since February between the city and a select group of social service providers. At the annual homeless count earlier this year, volunteers ducked under tents in the woods early in the morning and asked homeless campers questions about medical history, addiction, incarcerations, hospitalizations and time spent homeless.

Because of a permission error, no one is technically on the digital community list yet. City homeless coordinator Nancy Burke said that the forms, collected from about 140 homeless adults in Anchorage, inadvertently omitted a line that would allow agencies to share case histories.

Those people will have to be tracked down again. It's a setback — Burke said it will be at least a month before agencies actually start sharing data.

Training, meanwhile, is going on now for staff members at the different agencies.

For now, the signers of the disclosure agreement are limited to those agencies already using the database, Wenger said.

But Burke said it's expected that the list will be broadened to include other agencies that frequently come into contact with the homeless, like Bean's Cafe or Lutheran Social Services.

TOMORROW: How grants from Providence Alaska are building the backbone of the new system.