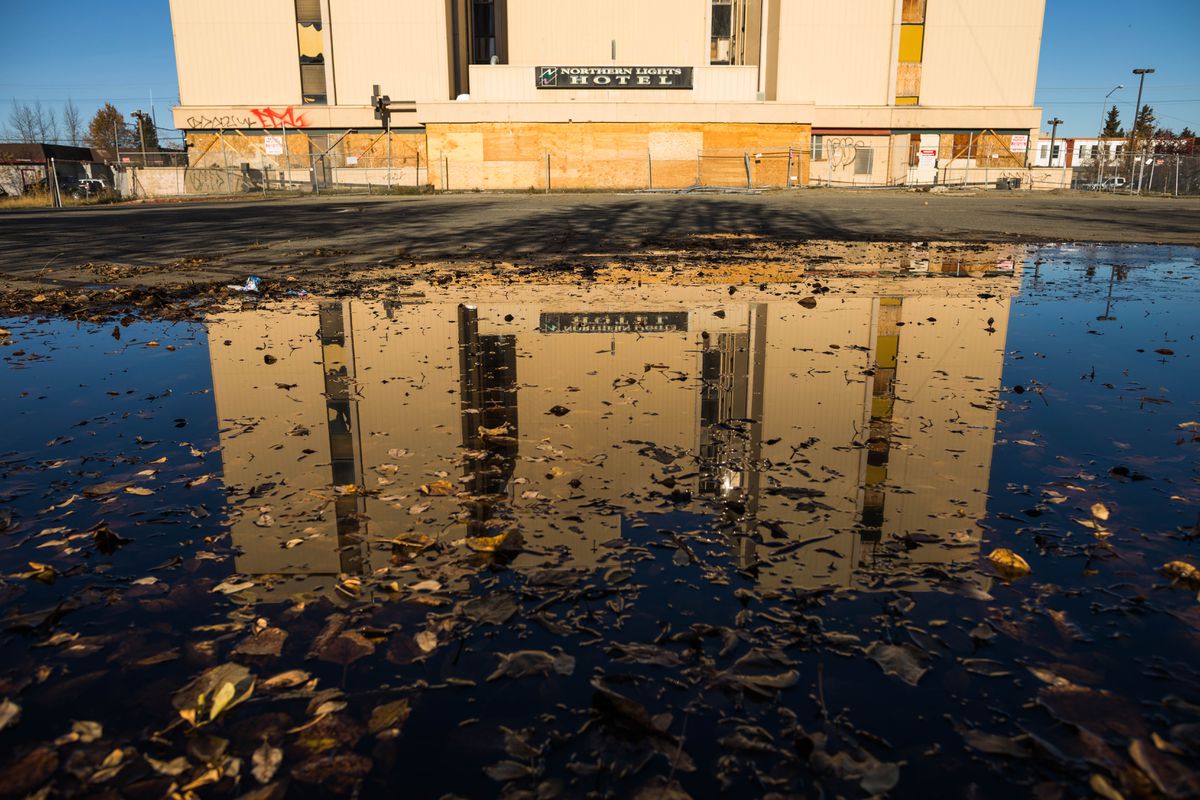 The Northern Lights Inn, photographed on Thursday. The building, which has been boarded up for years, is one of Anchorage’s worst eyesores. (Loren Holmes / Alaska Dispatch News)

The Northern Lights Inn, photographed on Thursday. The building, which has been boarded up for years, is one of Anchorage’s worst eyesores. (Loren Holmes / Alaska Dispatch News)

For the first time in recent memory, city investigators have obtained a search warrant to investigate complaints about squatters and trespassers at a private property in Anchorage — the blighted, boarded-up Northern Lights Inn.

When they searched the vacant hotel last month, inspectors found signs of trouble. They observed "numerous alcohol bottles, food wrappers and containers, clothing, places where fires had been started, used lighters and makeshift bedding," Anchorage code enforcement officer Richard Fern wrote this week in a letter to an attorney for the owners.

Now the city is ordering the property owners to fix the barricades and repair the water, heat and fire alarm systems. They say failure to do so could lead to big fines under a new city law, opening up a new front in what's been an ongoing conflict with the building's owners.

An attorney for the owners said the barricades would be repaired but challenged the other demands.

The city's action appears to signal a new approach toward what has been characterized as one of Anchorage's more prominent eyesores, one that has drawn particular public ire over the years. Mayor Ethan Berkowitz has made no secret of his desire to raze the hotel, moldering since it shut down in 2002 at 598 W. Northern Lights Blvd.

In an interview Thursday, Berkowitz called the building, located across the street from his old mayoral campaign office, a "blight on that part of Anchorage."

"If you believe that everyone's got to play by the same set of rules, that you can't abandon a building and let it go derelict and ignore your responsibilities, then this is what happens," Berkowitz said.

Reached by phone, Derrick Chang, a representative of Emerald Investments LLC — one of a number of companies owned by the family, which also owns the 4th Avenue Theatre downtown — said he wasn't going to comment yet.

Chang said the company planned to respond to the city "based on the timeline on the citation."

In the letter sent Tuesday to the property owner, Emerald Investments LLC, Fern cites a city law that took effect in July. That ordinance requires property owners to register, secure and maintain empty buildings. Fern said the company had to register the building with the city by Oct. 21, and clean it up and fix the barricades by Nov. 10.

Failure to do so could lead to hundreds of dollars in fines per day, according to the fine schedule in the law.

Separately, the city fire inspector, James Gray, gave the property owner until Friday to remove flammable material until sprinkler and fire alarm systems are functioning, and to seal open elevator shafts, which he said would pose a significant hazard for first responders during an emergency. In an inspection notice, Gray also ordered the owners to restore heat to the building.

Winner cited a 2006 agreement with the city that, he said, allowed the owners to take the heating, fire alarm and water systems out of service and "mothball" the hotel.

He said the building owners would secure the building "as soon as it is reasonably practicable" and clean out the inside. But Winner argued that the city couldn't force Emerald Investments to heat the building.

That "will make it more, not less, likely that the building will attract unauthorized persons," Winner wrote.

He also called the city's timeline for making the fixes "unreasonably short."

The international fire code, which the city has adopted, allows heat and fire-safety systems to be shut off and drained, but only if a vacant building has been cleared of "all combustible materials and debris" and only if it's fully secured against "unauthorized persons."

The Northern Lights Inn has sat boarded-up and empty since 2002. Its troubled past includes owner bankruptcies and five deaths from an arson fire. The Anchorage Police Department once used the building to train SWAT teams and canine units.

In late May, the Berkowitz administration rejected a proposal from Peach Investments LLC that would have linked a tax break to redevelop the 4th Avenue Theatre downtown to the demolition of the Northern Lights Inn.

On Sept. 21, an Anchorage district court judge approved an administrative search warrant allowing building inspections to take place without consent of the property owner. City attorney Bill Falsey said it was the first time he can recall that Anchorage officials sought a search warrant to investigate a violation of city code.

In seeking the search warrant, the city submitted three affidavits, two of which were from citizens who observed people entering the building. One citizen saw smoke coming out of an open window, according to the affidavit.

[Own an empty, boarded-up building in Anchorage? It could cost you.]

City officials last inspected the hotel interior in 2012, a city code enforcement officer, Kevin Collins, wrote in his own affidavit. Collins also said concerns about the building's structure, including a defective roof and structural decay, date back to 2003. He wrote that the city has yet to receive a permit application to fix those problems.

On Sept. 28, city officials, armed with the search warrant, met with representatives of Emerald Investments LLC for the inspection of the property.

No one was found in the building. But Jack Frost, the chief code enforcement officer for the city, said there was "all kinds of evidence" of habitation, including bedding rolls and places where fires had been started.

"Basically, the whole place was trashed," said Frost, who was not present but had discussed the event with his deputies.

Over the years, the city has been alerted to problems with people entering the building, Frost said. He said the property owners have historically been responsive to the complaints and taken steps to secure the building.

Frost said he wasn't aware of his department issuing a formal notice of violation for the property, however.

"It was just an accumulation of complaints from citizens and concerns over time," Frost said.

Falsey, the city attorney, said the owners aren't being singled out for special treatment, though he said the Northern Lights Inn has attracted far more attention than other vacant properties in the city.

"To my understanding, no other properties have raised this level of concern," Falsey said.