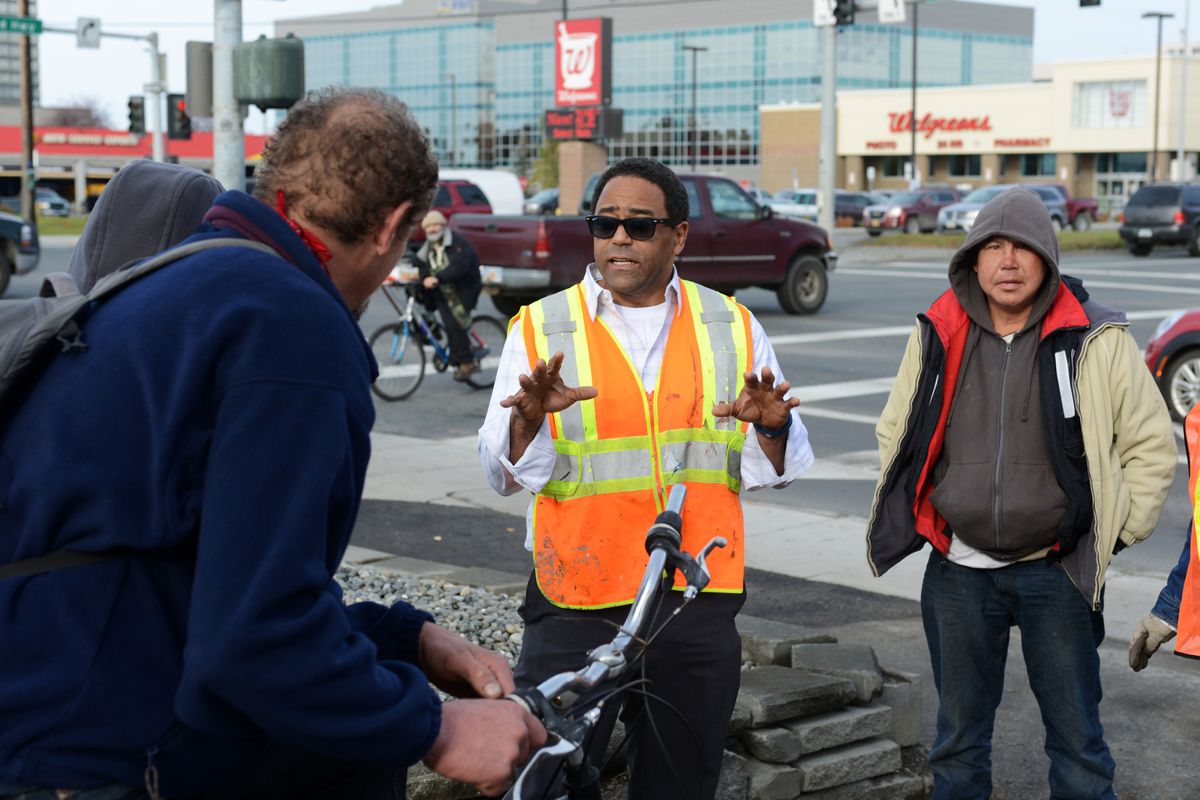 In a hurry to do something about Anchorage homelessness, the administration of Mayor Ethan Berkowitz gave Alaska WorkSource, a nonprofit in existence for only two years, a no-bid contract last spring to find and hire day-laborers to get them off the streets.

Run by a former real estate manager, Darryl Waters, Alaska WorkSource billed itself as a nonprofit providing employment training, work ethics and life skills to people with a history of homelessness, jail and drug addiction. Berkowitz's homeless coordinator, Nancy Burke, said the city found no one else offering the same set of services and access to addiction treatment while targeting people who were homeless.

At the time the Anchorage Assembly authorized the contract with Alaska WorkSource — the measure passed without discussion — the nonprofit was leasing a 12,000-square-foot city building in Mountain View. Under the terms of the lease with the city, Waters wasn't paying rent, but agreed to fix up a building that had been empty for years and in serious disrepair. He was also responsible for utilities.

Flygare also signed the city contract for the pilot van program, representing Tutan Recovery Services, raising questions about who was supervising the operation and whether the money went to Waters' nonprofit, Alaska WorkSource, or Flygare's profit-making enterprise, though the city and Waters say the money went to Alaska WorkSource. Burke said the businesses were considering merging at the time into a single for-profit corporation.

To city ombudsman Darrel Hess, the contract demonstrated what can happen when city business is rushed.

The Alaska WorkSource project was one of several initiatives spearheaded by Berkowitz in his first months in office to reduce homelessness. The van program was modeled after a concept pioneered in Albuquerque, New Mexico. It was designed to give $10 an hour, up to $600 total, to homeless people or panhandlers for cleaning up highways and bus stops.

It was a small pilot program that cost the city $75,000 and ran from September to early November. Twenty-eight people participated. Six ended up with full-time jobs. Fourteen enrolled in substance abuse treatment. Waters and Burke said the program's outcome exceeded expectations.

Waters said he's been keeping the program going with his own money. He also expanded it. As well as guiding people to his wife's substance abuse counseling business, Waters moved van participants into the Barratt Inn, a run-down hotel on Spenard Road he's operating and fixing up.

In October, as the WorkSource van program was wrapping up, participants said it was helping them. They included commercial fishermen who began drinking after returning from work hitches, a former cook in Kodiak, a woman who had recently left jail on the Kenai Peninsula and an artist and singer from Anchorage.

Waters said he found most of the people at the parking lot at Brother Francis Shelter and neighboring Bean's Cafe. Burke, the city homeless coordinator, said the program was designed for participants who were close to getting jobs but needed a little extra help.

One man, who gave his name as John, said at the time that the program helped him prepare for job interviews. He had been staying at the Gospel Rescue Mission when he learned about the work van. He found work at the Barratt Inn, the Spenard hotel, as a cook.

Nina Gorman was panhandling on the corner of Northern Lights Boulevard and the Seward Highway when the van pulled up, she said.

She said she felt lucky to get into the van program and later receive substance abuse treatment from Tutan Recovery Services. One weekday morning in October, Gorman and about a dozen others loaded into two white vans marked "Municipality of Anchorage" and headed for the intersection of Northern Lights Boulevard and Minnesota Drive. Gorman, in a yellow vest, and others picked up trash along Minnesota.

The crews also did some cleanup at the intersection of Northern Lights and the Seward Highway, where Gorman was originally picked up as a panhandler. A few people were panhandling that day. Waters talked to them. Two were relatives of Gorman's who, Gorman said, later joined the program.

In the early afternoon, the vans rolled back to the khaki-colored Alaska WorkSource headquarters in an industrial part of Mountain View. The group watched a motivational video, then were given a chance to speak with counselors.

Gorman had high praise for Waters, Flygare and their programs. She's been living at the hotel in Spenard.

"The thing that makes Tutan and Alaska WorkSource and (the hotel) work, they go at a person's pace," Gorman said.

She said she can make a living as an Alaska Native artist. Staying sober and off the street has helped her make her art, she said.

City officials emphasized that a relationship between the experimental work-van program and treatment for substance abuse would be key.

But Berkowitz's memo to the Assembly didn't disclose the close relationship between the counseling program and Alaska WorkSource.

In documents submitted by Berkowitz to the Assembly, Tutan Recovery Services is described as "a partner" of Alaska WorkSource and as such, the main justification for the no-bid contract.

A memo from Susanne Fleek Green, Berkowitz's chief of staff, said the partnership would "ensure its supervised workforce has access to behavioral health services as needed."

After being alerted of Tutan's use of the Mountain View building by a reporter, Hess, the city ombudsman, began his own investigation and concluded it wasn't appropriate for any other business than Alaska WorkSource to be using the building without written permission from the city.

"(Waters) got this lease as a nonprofit, and then he moves in his wife's for-profit business?" Hess said in an interview. "It doesn't pass the red-face test."

At an Anchorage Assembly meeting in late October, Assemblywoman Amy Demboski asked Hess to further investigate how the city came to lease the building to Waters.

Waters said in an interview that Tutan Recovery Services had been paying monthly for utilities. He said it was only logical to place substance abuse counseling services in the same building as the van program, and thought he was allowed to sublease the space.

Waters said that while the nonprofit's lease provided free rent, he and his wife had invested more than $130,000 into the building, on top of a $100,000 in-kind donation to run the van program. That investment could not be verified from Alaska WorkSource's nonprofit tax returns, the IRS 990 form, which itemizes large receipts and expenses. While the law requires nonprofits to provide a copy of the return during business hours, Waters said he didn't have a copy of his 2015 return, and his 2014 return didn't show payments for remodeling the building.

"That was never a rent-free deal," Waters said. "It's a misrepresentation of what our arrangement was."

The Assembly, in its 2015 approval of the below-market lease, said Alaska WorkSource would "rehabilitate" the interior and exterior of the building over five years.

The city real estate director, Robin Ward, couldn't confirm the dollar amount invested in the property. Ward said a physical inspection was scheduled for December before the lease would be re-negotiated.

By Nov. 10, Ward had drawn up a sublease for Tutan Recovery Services. The business is now paying $611 per month in rent to Alaska WorkSource, which then passes the rent to the city, the lease says. Alaska WorkSource pays $375 a month to the city in utilities.

Of the Anchorage nonprofits that got grants about a year into the Berkowitz administration, WorkSource was by far the least well-known. The other four were United Way of Anchorage, Catholic Social Services, Covenant House and RurAL CAP, all established in the city for decades.

Burke said she approached Waters about the work-van program. She said she met him and his wife, Flygare, in her previous position at the Alaska Mental Health Trust Authority.

Waters said he has years of experience offering work to people at the shelters, like mowing lawns at his properties. Flygare worked previously at the Anchorage substance abuse treatment nonprofit Akeela Inc.

Waters said he's completed more than 200 construction contracts. He said he and his wife have flipped houses to make a living.

Public records show he's run several other businesses in recent years. One, Cornerstone Remodel & Design, went out of business after the state fined Waters and his partner $24,000 for failing to have workers' compensation insurance. The other, Alaska Home Remodeling, shuttered in late September after it was accused in two lawsuits of mismanagement and breach of contract on remodeling projects. Both lawsuits ended in settlements; Flygare owned Alaska Home Remodeling but court records indicate that Waters was acting as the representative on the projects.

Waters described his actions that led to the lawsuits as mistakes that cropped up as he was absorbed in launching Alaska WorkSource. He said he and his wife "burned out" on remodeling and are now focused on helping the community.

"I'm not a perfect person," Waters said in a recent interview. "I've made mistakes along the way. And I'm trying to do the best I can right now to serve my community, and be a good guy."

That means the work-van participants would not have been protected against the medical costs of accidents while cleaning up street corners in September and October.

Waters said his insurance company failed to tell him that the coverage had lapsed. He said he fixed it as soon as he became aware of the problem.

Burke said the city learned of the workers' compensation problem from the state. She said she would be keeping tabs to make sure Alaska WorkSource complied with insurance rules and its lease of the city building.

A hotel in Spenard

While running the city van program, Waters also took over the management of a Spenard hotel, the Barratt Inn.

The hotel, built in the 1960s, has 200 rooms. Many customers are people transitioning out of homelessness.

Waters said he's helping remodel the hotel and its shuttered restaurant. He said he isn't being paid to do it. He said he was approached by the owner of the motel, Sunny Lee, at a community meeting over the summer. At the time, the motel was already being used as transitional housing.

Waters said the hotel fit into a broader vision that revolved around giving the homeless access to treatment and housing as well as work. He said it didn't make sense to drop people back on the street after taking them to day-labor jobs.

About a dozen people from the city work-van program are living in the rooms, Waters said. The hotel's monthly rent is $600 a room, but Waters said they aren't being charged.

There are a few ground rules there. No drinking, no drugs, no having guests in rooms. People also have to "keep moving," Waters said.

At first, people in the van program said they were working at the hotel in exchange for rent. Waters said in early November that he'd stopped that practice. But he said he appreciated "volunteers" to help fix up the place.

Burke, the city homeless coordinator, said the city is not involved with the hotel or supervising the people there.

Waters has big plans. He said he plans to tear out the bar in the restaurant — "We can't mark it a sober living facility with a bar in it" — and bring in jazz or reggae music.

In a brief tour of the area, he pointed out a stage and a bar with fluorescent lighting.

He's also given the restaurant and hotel a new name: The Bridgeway.

Meanwhile, the future of the city's work-van program is unclear. Burke said there isn't money to resume the project. She said there are no plans to write another contract using city vans.

Burke said the findings of the pilot project, to be presented to city Assembly members next week, will direct the next steps.