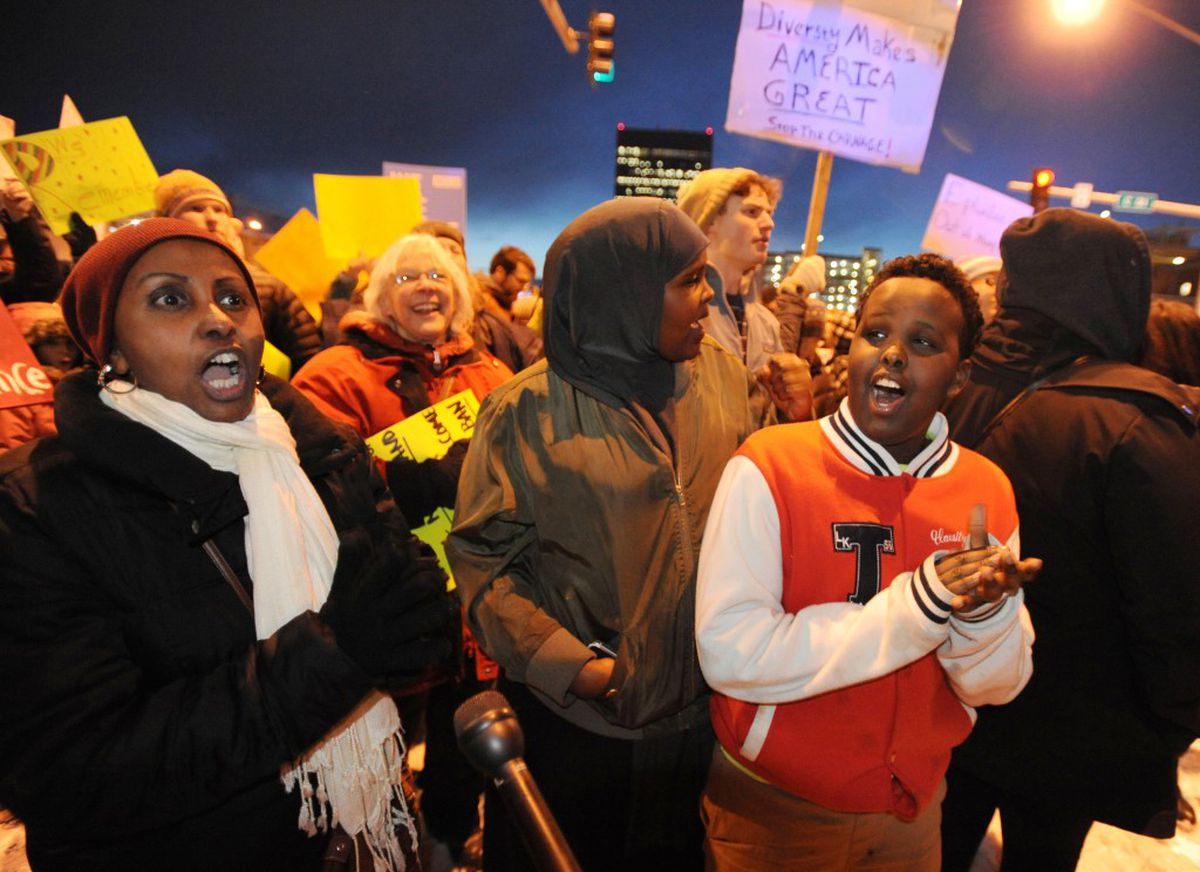 People gathered at the Federal Building after marching through downtown Anchorage at a protest of President Donald Trump’s executive order on immigration on Sunday, Jan. 29, 2017. (Bill Roth / Alaska Dispatch News)

People gathered at the Federal Building after marching through downtown Anchorage at a protest of President Donald Trump’s executive order on immigration on Sunday, Jan. 29, 2017. (Bill Roth / Alaska Dispatch News)

As the sun set, a crowd of about 200 people stood in the cold at the corner of Seventh Avenue and C Street, near the federal courthouse.

Protest organizer Michael Patterson said he'd been motivated by a desire to give Anchorage's immigrants and refugees visible community support.

"Immigrants and refugees here need to feel safe," he said. "You need to know your community supports you."

Lea McDermid, an Anchorage immigration attorney, held a sign that said "We are all immigrants." McDermid said the order has stoked fear and confusion in her clients.

"I have clients with asylum cases pending who are terrified," she said. "I'm telling my Muslim clients not to travel abroad because I don't know what's going to happen next."

Chanting "No ban, no wall," and "No hate, no fear, refugees are welcome here," at passing motorists in the deepening darkness and cold, the crowds took over Seventh Avenue, stopping traffic as they marched down the street.

When the crowd reconvened, Patterson called on the members of Alaska's congressional delegation — who have all so far been silent on the executive actions — to make public statements.

Anchorage Mayor Ethan Berkowitz stepped into the middle of the crowd with a megaphone.

"Anchorage is the most diverse city in the country," he said. "And like many of you here, I am the son and grandson of immigrants and refugees."

"What are you gonna do about it?" yelled someone in the crowd.

Patterson, the organizer, held his young son. He said he was happy about the turnout — in the many protests he had attended over the years, getting 25 people there at the start time was often a feat, he said.

"I think people on a visceral level feel that democracy is in jeopardy," he said.