Loose management of the Anchorage Fire Department's time-off calendar, especially in summer, has contributed to more than $1 million in excess overtime costs almost every year for at least the past decade, Fire Chief Denis LeBlanc told an Anchorage Assembly committee Thursday.

In an analysis of department budgets stretching back to 2007, LeBlanc and his deputies found that more firefighters, paramedics and engineers request time off in the summer months than any other time of the year. Managers appear to have accepted too many of those requests, LeBlanc said, leading to hundreds of thousands of dollars in extra overtime to cover the open slots.

LeBlanc said no one had bad intentions. But staffing the fire department is complex, he said.

"I don't want people to think that (employees) were abusing" vacation time, LeBlanc said in an interview. "It just wasn't as tightly managed as it should have been." 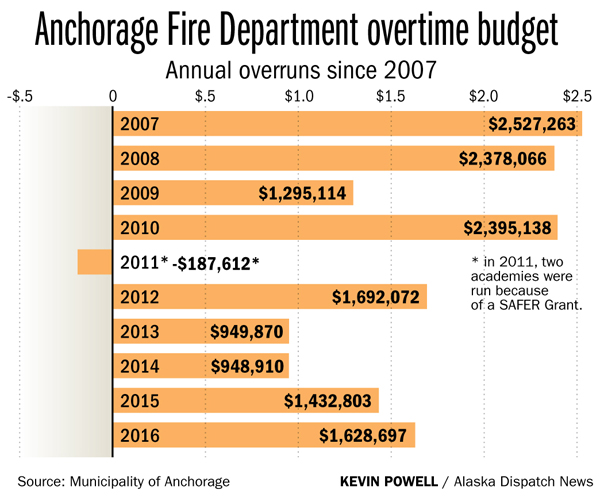 Mike Stumbaugh, the president of the Anchorage fire union, International Association of Fire Fighters Local 1264, said in an interview that the number of people off on a given shift is part of the union's contract with the city. Stumbaugh said overtime isn't the problem and budget overruns are a sign that the city is not budgeting the fire department properly.

But LeBlanc said he suspects that the limits in the contracts have not been strictly followed. With budgets tightening, LeBlanc said, he doesn't expect he can ask for more money next year, and is looking to improve management before cutting staff or equipment.

LeBlanc's presentation to the Assembly's budget and finance committee marked an attempt to look at the reasons behind the department's persistent budget overruns. In 2016, the department exceeded its overtime budget by $1.6 million — as it has, by roughly the same amount, for each of the past 10 years.

LeBlanc said overtime has been a key driver in overall budget overruns. Though it's making cuts in other areas, the fire department has asked the Assembly to cover a $1.4 million gap in a $94 million total budget in 2016.

A software accounting error for the cost of a fire academy also affected the amount of the overrun, LeBlanc said. But a budget analysis also revealed what LeBlanc called a "fundamental flaw" involving the regulation of vacation and leave time.

Amid a Spice epidemic that broke out on Anchorage streets in fall 2015, the fire department beefed up its paramedic staffing and used overtime to relieve exhausted emergency responders. Some of the last year's excessive overtime was due to the added staff, LeBlanc said.

Employees are no longer suffering from sleep deprivation or a loss of mental acuity, LeBlanc said.

On any given day, more than a tenth of the nearly 100 firefighters, paramedics and engineers working on rigs are absent.

That's for a host of reasons, LeBlanc said. Firefighters aren't qualified to fill in as an engineer or a paramedic without separate training. So if an engineer — the driver on fire trucks and ambulances — calls in sick, is injured or takes leave to go to a funeral, a firefighter can't be swapped in. It's difficult to coordinate, LeBlanc said. Four battalions are managing three separate shifts across 13 fire stations.

Employees submit leave requests for the upcoming year in the fall, so managers can plan to some extent how many people will be off at a certain time of year. But LeBlanc said administrators did a "less-than-stellar job" of coordinating leave requests in 2016 and in years past.

"We just accepted perhaps too many people being off, particularly in June, July and August," LeBlanc said. "After all, we live in Alaska."

Stumbaugh, the head of the fire union, said he disagreed. He said union contracts limit how many people can be off at once and aren't being violated.

Less overtime is taken in the off-months, which means more people can be off in the summer months, he said.

"The reason our budget usually is off is, we're off every year," Stumbaugh said.

He said the city hasn't been properly accounting for the needs of the department. "If you're consistently spending more than they give you, maybe they should give you more."

LeBlanc said city budget reserves aren't likely to be able to support a bigger budget. In 2016, the department paid $750,000 in "unforecasted" overtime to cover vacancies, LeBlanc told the Assembly on Thursday.

He said that managers were trying to do the right thing for employees, but the time-off requests, taken together, contributed to excess overtime in the summer months.

At the same time, managers can't control employees calling in sick, attending funerals or being called up by the military, LeBlanc said. He said the plan at the moment is not to change any part of the department's operations.

LeBlanc said he may come back to the Assembly in the spring if it appears that tighter controls on overtime aren't working.

More significant changes — to staffing levels, equipment or other operations — may be on the table at that point, he said.