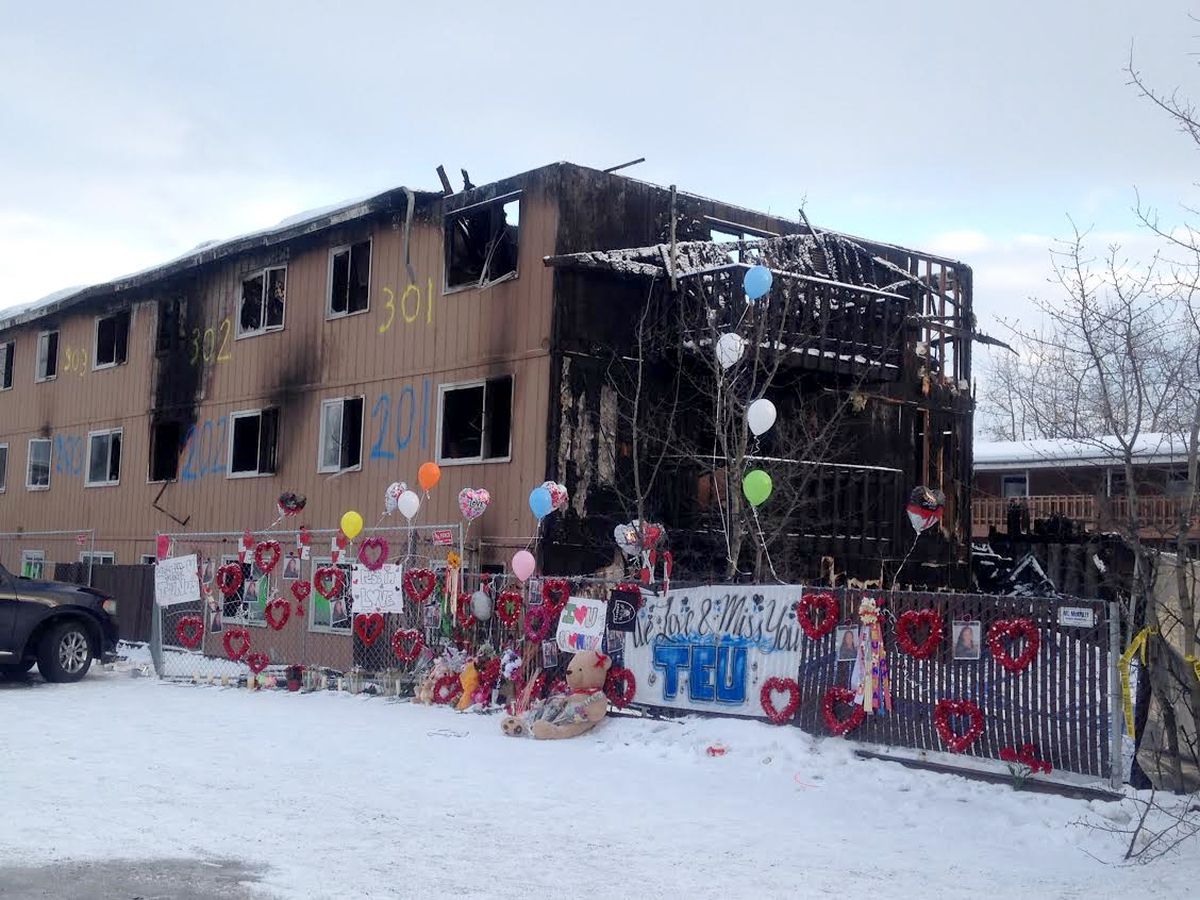 Investigators with the U.S. Bureau of Alcohol, Tobacco, Firearms and Explosives were on scene at the site of a deadly fire at the Royal Suite Apartments on Saturday. (Laurel Andrews / Alaska Dispatch News)

Investigators with the U.S. Bureau of Alcohol, Tobacco, Firearms and Explosives were on scene at the site of a deadly fire at the Royal Suite Apartments on Saturday. (Laurel Andrews / Alaska Dispatch News)

Federal investigators were on scene at the Royal Suite Apartments in Anchorage on Saturday afternoon as they investigated the cause of a fatal fire.

An 18-member National Response Team from the U.S. Bureau of Alcohol, Tobacco, Firearms and Explosives was in Alaska to investigate the Spenard fire that killed two people, said Lt. John McKinnon with the Anchorage Police Department.

"We got the (federal investigators) involved because they are specially equipped to handle large explosions or big fires, commercial fires," McKinnon said.

There's no word yet on the cause of the fire.

"That's the craziness of it," McKinnon said. "You know, a lot of times we have fires in Anchorage and you can say cooking or that kind of stuff, but this one, we don't know yet."

Two people died, 16 were injured and dozens were displaced in the fire that tore through the apartment building early Wednesday.

['The fire was above our heads': Survivors recount frantic escape from apartments]

The two fatalities have been identified as 38-year-old Teuaililo Nua and 63-year-old Vivian Hall. Late Friday, about 50 people gathered in a candlelight vigil to mourn and remember Nua. Police hadn't been able to locate Hall's family, they said Friday.

On Saturday afternoon, balloons, pictures and signs were still hanging on the fence outside the buildings as officials crisscrossed between the apartment complex and two large trailer vans. McKinnon said those vans belonged to Anchorage police — one a crime van and the other a command van that had internet, phones and a place to stay warm.

Three-digit numbers, which McKinnon said were the apartments' room numbers, had been written on the outside of the building. A fence and police tape surrounded the area.

McKinnon said the investigation would be a "process of elimination" to determine the fire's cause.

This is only the third time that federal fire investigators have visited Alaska, McKinnon said. They were sent in at the request of the Fire Department, Hettrick said, due to the size of the fire, and the fact that there were fatalities and numerous people displaced.

The last time was in April 2002, after the Aspen Hotel burnt down, McKinnon said. The multimillion-dollar Aspen in downtown Anchorage was still under construction when it burned to a pile of debris, the Anchorage Daily News reported at the time. Thirty-two federal investigators were sent to investigate. Officials said in June that year that the fire had been set by a group of transients illegally living in the hotel.

Before the Aspen Hotel fire, the last time federal fire investigators came to Alaska was in 1985 for an Anchorage clothing store blaze, Chuddy said.

[Alarm system at fire-destroyed building was up to code, city says]

McKinnon said the Spenard investigation would likely last about a week, and a report would take about a month after the federal investigators leave Alaska.

The investigation had multiple aspects, McKinnon said. People died. The fire could have been set intentionally. And insurance companies were in play, he said.

"We're trying to do one investigation that will cover all those aspects and leave no doubt of what took place," McKinnon said.

Anyone hoping to donate goods to displaced individuals can drop off basic essentials, like clothing or cookware, to the Comfort Inn Downtown-Ship Creek through Sunday, said Richard Joe, who runs the Facebook group Anchorage Scanner Joe and coordinated the drive after being asked by group members.

Starting Monday, donations will be collected at a different location but Joe wasn't yet sure where. He said he will post the information on the Scanner Joe page.

A GoFundMe page has also been started for Nua's family.

The Red Cross wrote in a release Friday that it had closed its shelter, as all displaced people had found housing elsewhere.

The Red Cross will now turn to recovery services to affected people who didn't stay in the shelter, and said it would have additional volunteers at its downtown offices on Monday. People wishing to donate can visit redcross.org/alaska or call the Anchorage office at 907-646-5401. All donations stay within the Red Cross of Alaska, the release says.