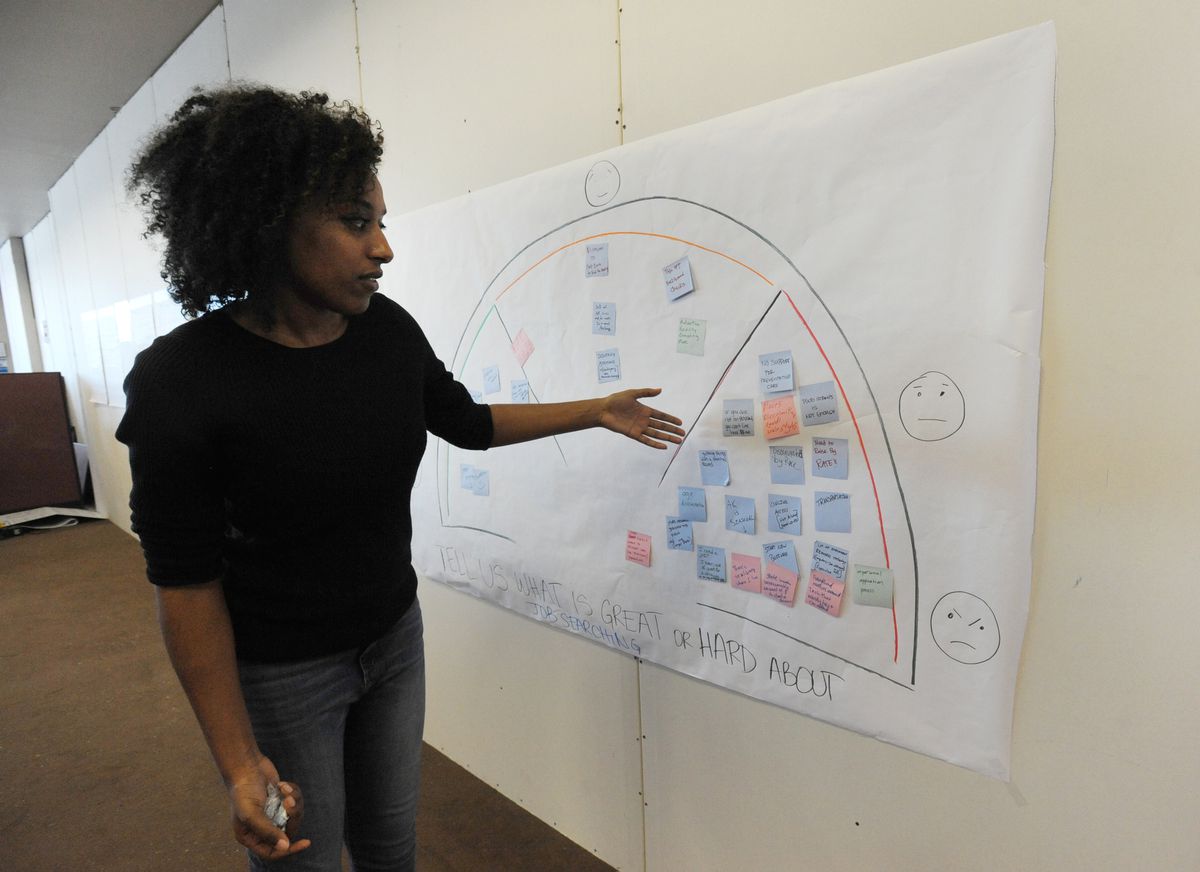 Clorama Dorvilias, a fellow with Code for America, looks at responses gathered from people at the Loussac Library on Thursday, March 9, about the challenges and “pain points” they have experienced while trying to find a job. (Bill Roth / Alaska Dispatch News)

Clorama Dorvilias, a fellow with Code for America, looks at responses gathered from people at the Loussac Library on Thursday, March 9, about the challenges and “pain points” they have experienced while trying to find a job. (Bill Roth / Alaska Dispatch News)

The San Francisco-based software engineer with the tech-nonprofit Code for America also knew that nearly 1 in 4 Mountain View residents were out of work.

It took Dreyfus about two hours to program a map that showed job postings at businesses along People Mover's Route 45, which runs through Mountain View.

Dreyfus demonstrated the map at a gathering of local and state officials and business and nonprofit leaders earlier in March at the Mountain View Boys and Girls Club. At that point, Dreyfus and her Code for America colleague, Clorama Dorvilias, had spent about two weeks in the city, talking to job-seekers and case workers.

Dreyfus' map was a "rough draft." But it signaled a major goal for her and Dorvilias — to use technology to make job-hunting in Anchorage less painful.

Code for America is known as the "Peace Corps for geeks." The nonprofit, which is funded by major tech companies like Google and Microsoft and organizations like the Knight Foundation, has this belief: Government is falling way behind in technology. Using government services should be more like using Amazon instead of traipsing to the DMV to fill out paper forms.

The organization partners with cities on projects, which is what brought Dreyfus and Dorvilias to Anchorage. Through a fellowship, the two will be regularly traveling to Anchorage over the next seven months to help the city's workforce.

The first priority is to drive down the high unemployment rate in Mountain View, long one of the city's low-income neighborhoods.

People who live in Mountain View want to work, said Kirk Rose, the executive director of the Anchorage Community Land Trust and one of the "local team leads" in the Code for America project. Rose's nonprofit started focusing on workforce development in the neighborhood about a year and a half ago, and has seen strong interest among residents in job fairs and library programs.

But transportation, childcare and language often pose barriers. There's also a large percentage of residents who work more than one job, surveys showed. Some just want one good job, Rose said. And they don't think they can find it on the Alaska Labor Exchange System, where the state posts jobs online.

"I've never heard anyone say they love ALEXsys, the state job site," Rose said. "So let's try to find an alternative to that."

Anchorage is one of two cities where a Code for America team is focusing on workforce development. The other is San Diego. Other cities have the research teams looking at health or social justice issues.

Brendan Babb, Anchorage's chief innovation officer, said the city began laying the groundwork for the fellowships several years ago under Lance Ahern, the former information technology director. Babb, who has also been involved with Code for Anchorage, the local chapter of the national organization, started his job a year ago and was looking for ways to pay for the program by the summer.

Anchorage Mayor Ethan Berkowitz, Babb's boss, has made workforce development one of his priorities as mayor.

Babb said he's aiming not to use taxpayer money. A mix of Bloomberg and Rasmuson foundation money are the city's match for Code for America's $250,000 investment in the project, Babb said.

Dorvilias and Dreyfus plan to focus on Mountain View first. Then they'll move to other neighborhoods with higher unemployment rates, like Muldoon and Spenard, Babb said.

In the civic spirit of Code for America, the apps or websites will be public, and any city can replicate it.

Dorvilias worked with low-income elementary school kids as an AmeriCorps Vista volunteer in Oakland and has done advocacy for Silicon Valley companies in housing and community development. She recently got a masters in "interaction design" and is the one designing the research methods in Anchorage.

Dreyfus is the software engineer. She's written code for LinkedIn and FitBit.

The women arrived in Anchorage Feb. 21 and left March 11. They'll be back every six to eight weeks and will keep working on the Anchorage project in California.

In their first visit, Dorvilias and Dreyfus narrowed the list of populations with the most trouble finding work, including refugees, people with limited access to technology, seniors, former inmates, single adults with children, veterans, people battling mental health problems and homeless youth.

Anchorage is far smaller than San Diego, the other city where data fellows are researching workforce development. But it's no less complex, Dreyfus and Dorvilias said.

At the business roundtable earlier this month, where the audience included Mayor Berkowitz and state labor commissioner Heidi Drygas, Dorvilias demonstrated an animated gif image she had built that showed the tangle of organizations and client referrals. People were being bounced around, and it wasn't always clear how they ended up.

"Data is loosely tracked, if at all," Dorvilias said.

In New Orleans, a Code for America team discovered that job-seekers often failed to have the right documents when visiting a job center. The researchers built a website, "Career Path NOLA," aimed at telling people what documents were needed.

Taking time off and getting child care, but failing to bring the right documents, will lead to a wasted trip, Dorvilias said at the business roundtable.

A similar type of tool could be right for Anchorage. But Dorvilias and Dreyfus said that won't be clear until the research wraps up.

Some of the research was taking place on the third floor of the Loussac Library earlier this month. Near people on computers, Dorvilias waited for visitors.

A sign was taped to the wall. "Tell us what is great or hard about job searching," it read.

Through another door and down a hallway, the smell of pizza wafted from the ornate Ann Stevens room.

There, Dreyfus stood next to bookshelves posted with chartreuse notecards. The notecards bore the names of agencies like Alaska Housing Finance Corp., United Way, NineStar and SNAP, the federal food stamp program. People were putting small stickers next to organizations they'd used while job-hunting.

The event was wrapping up, but one 42-year-old man wearing a Carhartt-brand beanie and beige jacket walked in and sat down in a chair with a couple of slices of pizza. He'd heard about the workshop and made his way over.

Dorvilias and Dreyfus started gently quizzing him. They asked about his "pain points" in finding a job.

The man, who declined to be identified by name, said he didn't have a phone or a permanent address. Those were his biggest problems, he said.

"What services have you used in your job-seeking?" Dreyfus asked.

The man said he'd previously qualified for a discounted "Lifeline" mobile phone from GCI through the food stamp program. To look for jobs, he turned to Craigslist.

Dreyfus wrote down his responses on a Post-It note.

To record similar interviews, Dreyfus and Dorvilias made a Tumblr social network page. A few quotations from the page:

"Computers are hard for us, for us who are 50 years and older," said an older woman who comes regularly to the Mountain View job library lab for help with updating resumes and job searching.

"Doing the paperwork is pretty much the same, it's just doing it everywhere," said a job seeker who had been looking for work since December.

"I'm applying to all these places already, how much more do I have to do? I've done just about everything," said a job seeker on the verge of tears who has been looking for work for the past three months.

"We're so relationship minded, we haven't gotten to the techy place yet," said a case manager discussing her preference of calling in referrals.

All of the data will go into decisions about the websites or apps that Code for America will build for Anchorage, Dreyfus said.

Each time the two researchers return to the city, they'll have "prototypes" to test out with job-seekers.

By October, they say, they'll have something final to show.