After less than 2 years on the job, Anchorage police chief announces retirement 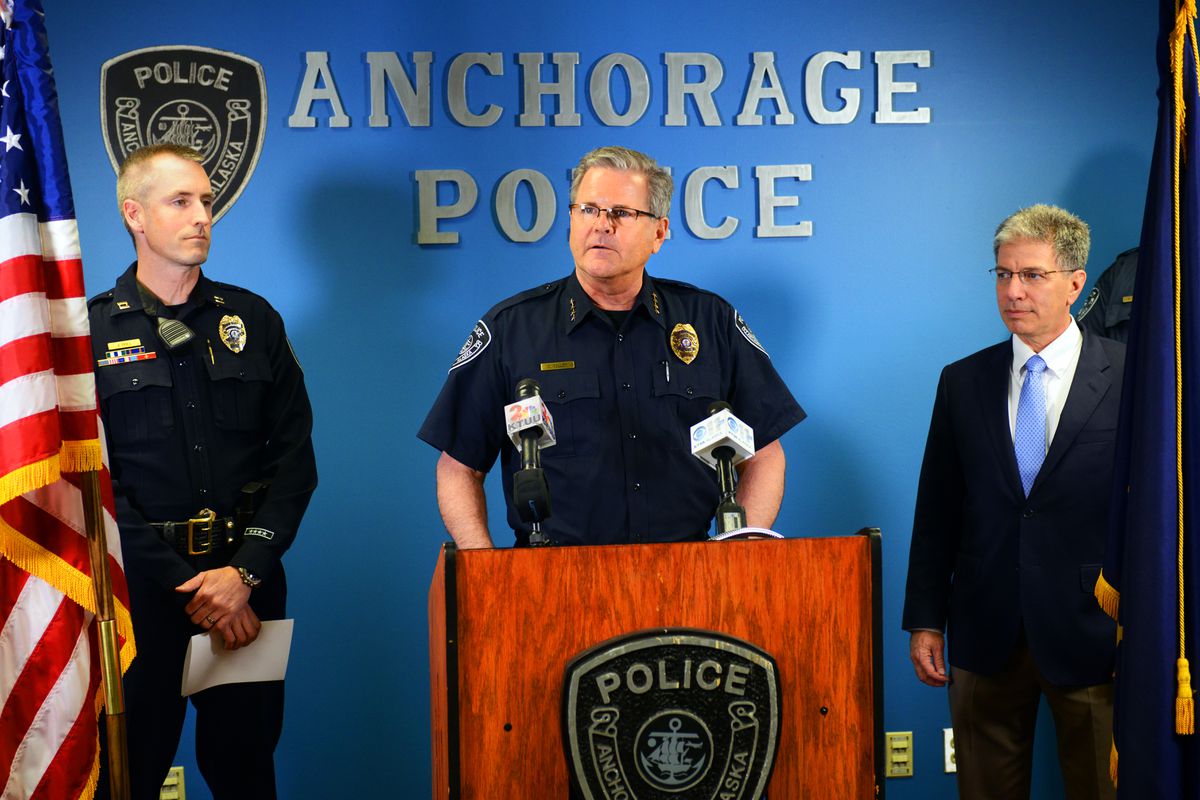 Anchorage Police Chief Chris Tolley announced at a news conference Monday that he plans to retire in June, handing off the job to a captain raised in Anchorage with more than two decades of experience in the department.

Tolley's unexpected announcement came just a year and a half after he was sworn in as chief, though Tolley, 59, said that he took the job knowing he expected to retire. During his tenure, the perception of high crime and murder rates became a major political issue for him and his boss, Mayor Ethan Berkowitz.

The new chief will be Capt. Justin Doll, 44, the commander of APD's crime suppression unit. He joined APD in 1996.

In prepared remarks at the Anchorage Police Department headquarters off Elmore Road, Tolley said he felt he had improved morale, cohesion and accountability within the department.

"It's on a good note," Tolley said afterward of his plans to leave.

In an interview, Berkowitz described Doll as thoughtful, skilled and well-respected by fellow officers.

"He's a prime example of developing leadership from within," Berkowitz said.

Berkowitz said there were vacancies at the commander level and morale problems at the start of his tenure. He said it was important to draw a new chief from within the existing pool of officers to show that it was possible to climb up in the ranks.

Tolley was hired in August 2015, the month after Berkowitz became mayor, and he came from the Alaska office of the U.S. Drug Enforcement Administration. Tolley was already at the retirement age for his federal law enforcement job, he said Monday, and he and Berkowitz discussed his retirement while setting goals for the department.

Among those goals was increasing the number of officers. During his mayoral campaign, Berkowitz promised to boost staffing to 400 officers.

After an infusion of money balanced with cuts to other departments, there's now roughly 410 sworn officers, about 50 of whom are in training.

In early February, Tolley said, the topic of his retirement came up again, and became settled in recent weeks.

He said he plans to stay in Anchorage initially and spend time with his wife.

He's a fan of using data to better target police resources, though he learned a lesson last year when he tried to use data to illustrate crime trends.

At a September community council meeting, Doll told a roomful of South Addition residents that property crime had stayed "relatively flat" in recent years. That didn't sound right to the neighbors in the room, whose frustrations about break-ins and theft in their near-downtown neighborhood were boiling over. Doll got a lot of pushback after the meeting about his presentation.

It turned out, it wasn't right. Theft reports were actually trending upward. Doll returned to his original report, and discovered that he received an incomplete data summary as a result of a software error.

Doll acknowledged the error. He said that if he could go to the meeting again, he would validate how the residents felt.

"I definitely learned a lesson about dealing with data, but the more important lesson is that how residents feel about their community is way more important than stats," Doll said Monday.

Beyond saying that he expected data-driven policies in the future, Doll didn't talk too many specifics about his leadership plans.

He has a lot of ideas, he said, but he wants to talk them over with his new command team first.

"Don't expect any sudden changes. Everyone is doing a really good job," Doll said of his plans to communicate with fellow officers.

He added: "There are things we think we can do better, new things I think we can bring online. I'll be keeping them informed as we do that."

But if there had to be a new person at the top, Wilson said, he was glad it was a veteran of the department. He said Doll knows APD "inside and out."

Wilson also said he was pleased Berkowitz and Tolley picked a successor before Tolley announced his retirement and allowed time for a transition period.