An Anchorage landlord confronts the epic mess her renter left behind 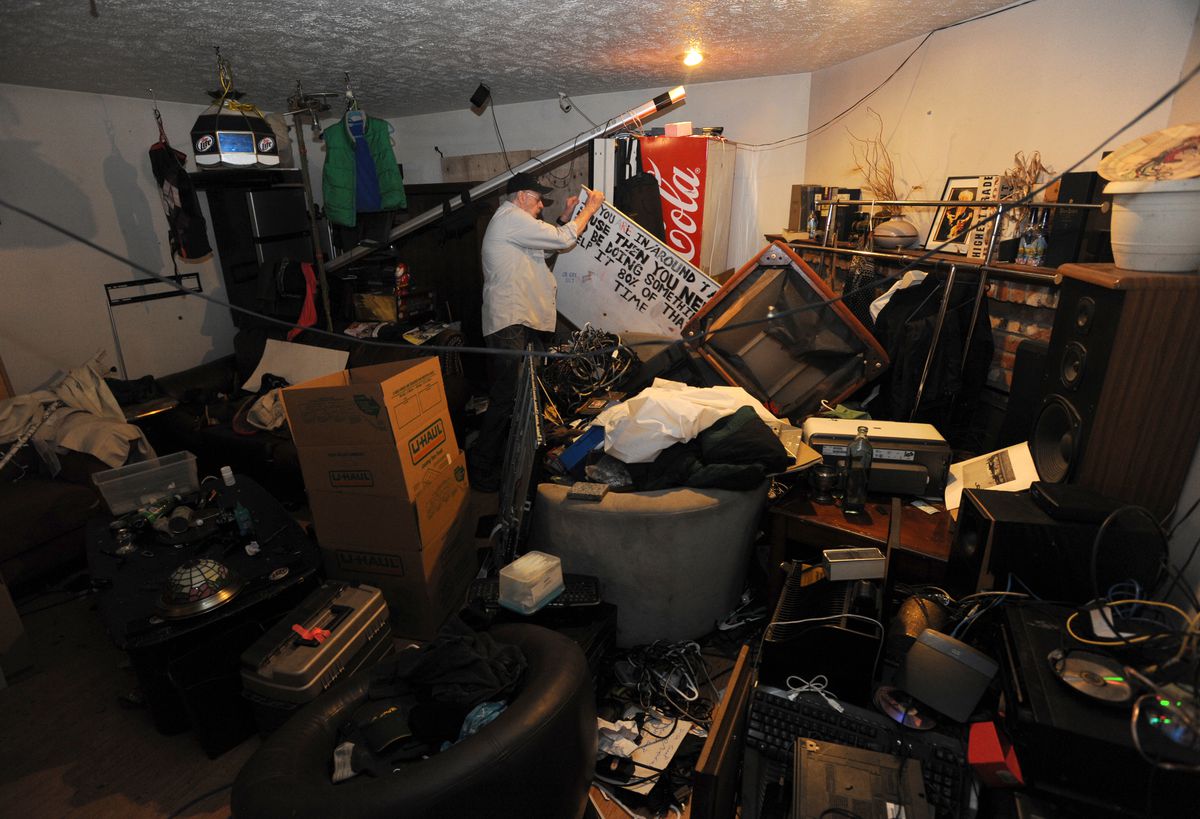 On eviction day in late July, after the tenant and his entourage of squatters had gone, Gail Somerville took a deep breath and finally opened the door of her rental house off Lake Otis Parkway.

In the months she had been trying to kick the man out amid a mounting mess, frequent police visits and growing discontent from neighbors, she had worried about the state of the gray-and-maroon zero lot line house she had owned since the 1980s.

But her imagination had not run to a scene like this.

From the front door to the back deck, the house was in shambles, crammed with a bizarre array of items large and small. There was a Coca-Cola vending machine, a well-used bong, one of those claw games where children try to win stuffed animals at grocery stores, bags of rotting garbage haloed in flies, crack pipes, big-screen televisions, syringes, speakers and so much more.

Couches were piled upon couches. Computers on computers. The space was too packed to freely walk through.

To Somerville, it looked like her tenant had turned the house into a junk warehouse and drug flophouse.

A few notes hinted at what life inside the house had been like.

In bold letters, someone had written on a whiteboard, "IF YOU ARE IN/AROUND THIS HOUSE THEN YOU NEED TO BE DOING SOMETHING TO HELP IT 80% OF THAT TIME."

On the fridge was a note that read "I, Teenah, don't mind helping out but please keep this f–king kitchen clean."

Teenah had lost that battle.

A stack of filthy dishes teetered in the sink. Inside the freezer was 40 pounds of rotting salmon. The electricity had been turned off for nonpayment.

A few days later, Somerville got an estimate from a company that specializes in hauling away junk. She was told that alone would cost $9,000.

‘I’m the queen of second chances’

The story of Gail Somerville's house is an extreme example of what can go wrong when a tenant's life spirals into chaos, taking a property along with it. It also raises questions about what neighbors, landlords and authorities can and should do when a house in decline becomes a broader problem.

A cheerful 73-year-old retired elementary school teacher, Somerville is hesitant to make her misfortune public, though details have been shared on social media and a blog. Mostly she doesn't want her neighbors to be in the spotlight.

"They've been through enough," she said.

She's also a little embarrassed about what happened. She's the first to admit she didn't know much about evictions.

Her situation may be extreme, but she's not alone, said Ralph Ertz, an Anchorage attorney who has been practicing landlord-tenant law for nearly 30 years. Situations where renters turn houses into hubs for illicit activity, sometimes causing major damage, are "pretty common," said Ertz.

Many inexperienced landlords renting out a single property don't treat their rental like a business, he said.

"In general, people rent their homes with about the same preparation they would put into setting up a corner lemonade stand in their yard," he said. "The fact is they are letting people move into hundreds of thousands of dollars of their investment."

It could be worse: If drugs like methamphetamine are manufactured in a house, the whole property can be "essentially condemnable," he said.

He paid the rent on time

Somerville bought it in the early 1980s and raised her son there while working for more than 30 years as a special education teacher at the downtown Denali Elementary School, now Denali Montessori.

When she neared retirement and moved to a house nearby, she decided to hold on to the property and rent it out. She hoped someday her son might want to move in and raise his own family there.

Her first couple of tenants caused no problems.

Then, about three years ago, she rented it to a man in his early 30s, the relative of a neighbor. He had a job at a restaurant and seemed polite enough.

Somerville said she had him sign a basic rental agreement. He paid the monthly rent of $1,250 on time, she said.

Then, about a year ago, the trouble began in earnest.

Neighbors noticed a mounting flow of people coming in and out of the house at all hours. Suddenly there was a surplus of cars parked in the driveway and on the street.

Police were called over and over — so often, Somerville says, that officers began to refer to the place simply by its house number.

"It was awful," she said. "The neighborhood was up in arms, as they had every right to be."

Last winter, Somerville started to try to evict the man. She admits she was naive about what that would take.

She'd go over to speak with her tenant and he'd come outside on the porch. He never let her inside. As the squatters grew in number, she started to feel uneasy about her safety. The mess visible from the street got worse and worse.

The Anchorage Police Department was called to the property so many times it was in danger of breaking a city law for excessive police calls. After eight calls in a year, owners can be fined $500 for each subsequent qualifying response, according to APD spokesperson Renee Oistad.

Somerville said she also got a letter from the city saying the mess around her house needed to be cleaned up or she was in danger of losing it.

Somerville started going to court around March. But every time she went to get a court-ordered eviction, she learned she'd done something wrong. Like most landlords and tenants who end up in eviction court in Alaska, she had no attorney.

"I was trying to evict him because of the drugs and the damage and the complaints, not because he wasn't paying rent," she said. "And that requires different things."

Getting an eviction for bad behavior can be a delicate process, said Ertz, the attorney who represents landlords. Allegations of drug dealing, loud noise or partying aren't enough without evidence they happened.

"You end up with a proof problem."

Also, landlords without professional help often find themselves running afoul of regulations about notices, time limits and other details of the eviction process, Ertz said. If they mess up, they have to start over, he said.

Eventually, the neighbors got fed up. Shaynah Drury bought the house next door, a cheerful yellow and green zero lot line, this year.

"WELL ANCHORAGE IF YOU HAVE SOMETHING THAT WAS STOLEN IT'S PROBABLY IN MY NEIGHBOR'S YARD!!!" she ended the post. "FEEL FREE TO SHARE!"

Somerville finally got the eviction order on July 19. The tenant stopped paying the rent, which made things clear-cut in court, she said.

In a rare move, APD officers personally showed up to enforce the eviction. They usually don't do that, said Oistad. But in this case, there was a "community safety concern."

The eviction day "was like a party," Somerville said. When the tenant and the others who had been crashing at the house left, neighbors all came over to look.

"It was dancing in the streets," she said.

The mess left behind is overwhelming. On one hand, it's a disturbing look inside a very dysfunctional household. But it's also a colossal, expensive mess Somerville doesn't really know how to handle.

In the backyard they unearthed a half-dozen washers and dryers, several refrigerators, lawn mowers, tires, a treadmill, terrariums, a hamster cage and an aquarium slowly filling up with rainwater.

She can only guess at where it all came from. She suspects much of it was stolen. Some may have been bartered or purchased, she said.

"I think maybe he sort of thought he and his buddies could pick up things and fix them and repair them — there's like five vacuum cleaners — and sell them."

As recently as Thursday, the man Somerville rented to — who has not been charged with any crime — was selling items like work boots and a nail gun on popular Anchorage online marketplaces.

Anchorage police say there are "ongoing investigations" related to the house and can't release more details until someone is charged. The same goes for allegations of drug use or dealing at the house.

"No arrests to speak of right now," Oistad wrote in an email.

On a recent day, Somerville and her friend Tim Jones were combing through the wreckage. His most recent discoveries were camera equipment and a dirty cat litter box. Somerville said the whole experience has changed her view of people.

"I don't automatically assume that everyone is a good person anymore."

The pretty greenbelt behind her house is now, to her, a place where people have cut a hole in her fence and pulled up a truck to take away things in the night. She suspects some of the squatters who trashed her house are living back there now.

Somerville and her friend stood in the driveway inspecting another mysterious tarp-sheathed pile.

"There's something under this tarp," Somerville said with a sigh. "I don't know what it is. But it's a big something."