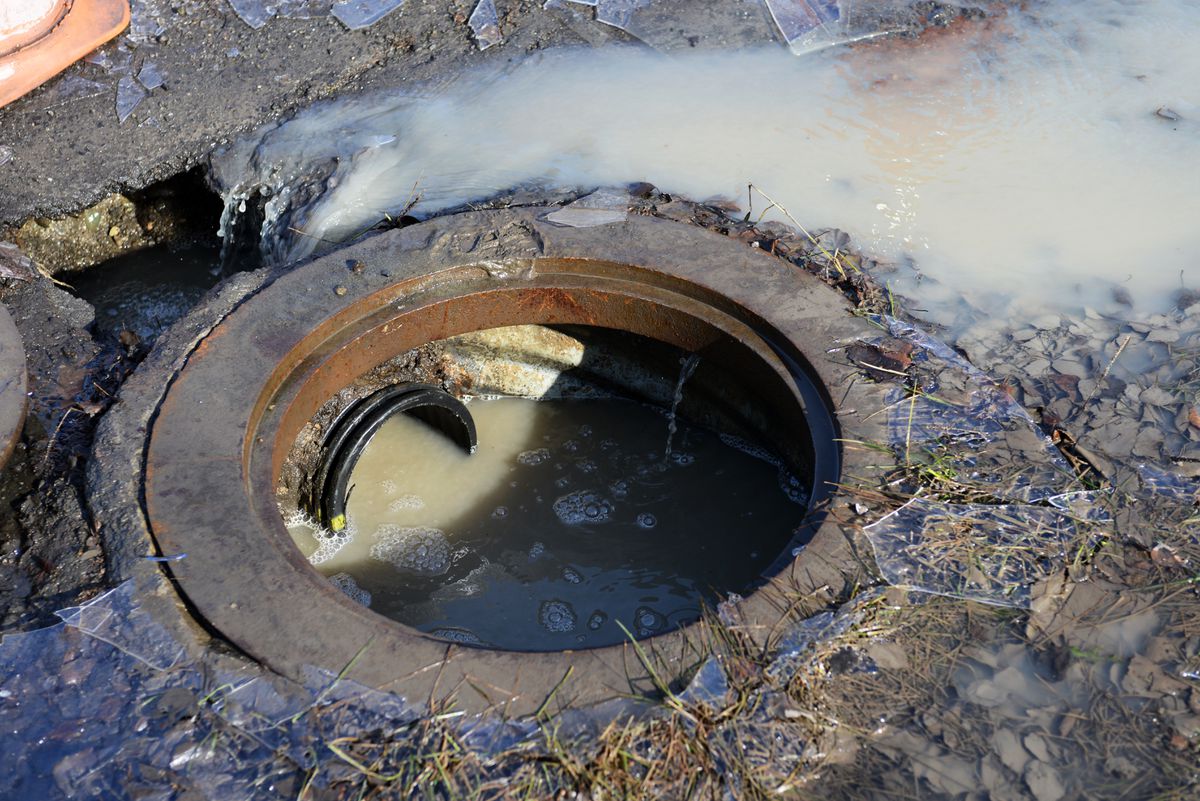 Water pours through broken pavement into a broken pipe that no longer carries water away from a storm drain at Nathan Drive and East 75th Avenue on April 21 in South Anchorage. (Erik Hill / Alaska Dispatch News)

Water pours through broken pavement into a broken pipe that no longer carries water away from a storm drain at Nathan Drive and East 75th Avenue on April 21 in South Anchorage. (Erik Hill / Alaska Dispatch News)

As Hurricane Harvey unleashed devastating floods in Houston and other Texas cities last week, officials in Anchorage couldn't help thinking about a storm even a fraction of that size striking the city's aging storm drains.

"Our infrastructure's getting old," said Jason Bockenstedt, deputy chief of staff for Mayor Ethan Berkowitz and a former member of the city's project management and engineering department. "Even with just a small rain, it fills people's yards."

It's an issue that Berkowitz has taken up as mayor. This past year, Berkowitz has been pushing for the creation of a new utility that he says could more efficiently address chronic failures associated with Anchorage's storm drains, reduce problems with flooding and glaciation, and help lower costs associated with housing development.

The idea of a stormwater utility has been talked about in Anchorage for decades but it's gained new traction under Berkowitz. In late June, the Berkowitz administration signed a $250,000 contract with the Anchorage-based engineering firm Stantec Consulting Services Inc. to study what such a utility could look like.

The general idea is that residents would receive a stormwater utility bill, just like a water and sewage bill. More than 1,600 other stormwater utilities operate across the Lower 48. One of the first was in Bellevue, Washington, in the early 1980s.

The revenue generated by the utility could allow the city to more systematically fix or upgrade failing pipes and even buy land to create natural drainages in the form of wetlands or green space, city officials and other advocates say.

At this point, it's not known how much ratepayers would pay, how such a utility could operate in Anchorage or how areas like the Hillside would fit in. Those questions will be addressed in the study, Bockenstedt said.

In Anchorage, water flows naturally from the Chugach Mountains into streams like Fish Creek and Chester Creek and out to Cook Inlet. It also runs off roofs and parking lots, picking up sediment that is later filtered out through the drain systems.

The city has nearly 600 miles of storm drains, about three-quarters of which are owned by the municipality. The state owns the rest of the system. There are also more than two dozen different watersheds with varying levels of planning, management and maintenance.

On the Anchorage Hillside, where drainage problems are well known, roads and drainage ditches are maintained by a patchwork of districts funded by homeowners, as well as homeowners associations or informal neighborhood groups.

"The current uncoordinated approach offers no practical means to solve persistent problems caused by existing poorly designed or inadequate drainage facilities, nor does it plan for or construct new or upgraded systems to control increased runoff from upstream development," reads a recent report from the Anchorage Economic Development Corp.'s Live. Work. Play. Housing group, which formed to examine obstacles to private development. The group has recommended the city study a stormwater utility.

According to a copy of the city's contract with Stantec, the consulting work involves compiling maps and satellite images of the current wetland and drainage system, creating an inventory of existing stormwater problem spots, researching the legal authority around creating the utility and assembling "persuasive information" to show people why such a system would be needed.

A report is due early next year, and the Anchorage Assembly would decide how to proceed.

In the lower elevations of the Anchorage Bowl, city street maintenance crews have memorized the problem spots that crop up during spring breakup or at times of heavy rain. At the intersection of 75th Avenue and Nathan Drive one weekday in April, a huge machine known as a Vac-Truck parked over an overflowing manhole.

A suction hose, maneuvered over the manhole by two city workers, punched through a thin mantle of ice and begin sucking up the water.

Until this year, when voters approved bond money to fix the failing drain, the city was spending between $15,000 and $20,000 every year to pump water from the street in a quiet neighborhood near the Old Seward Highway and Little Campbell Creek, according to Bockenstedt.

Other projects on this year's bond give a glimpse of the types of projects the proposed utility would pay for. One project aimed to fix drains near 22nd Avenue between Farmer Place and Boniface Parkway in East Anchorage, which were "plagued with flooding and glaciation." A failing storm drain on 82nd Avenue west of the Old Seward Highway had flooded frequently during rain and caused months of ponding during spring breakup. Officials called the flooding "a hazard to motorists and a threat to nearby businesses" in a description of the bond, which called for $2.6 million to replace the failing drain.

Last month, city workers took the Stantec consultants on a tour of the current worst spots for Anchorage when it comes to flooding and glaciation:

At this point, the city relies on bond money to fix what breaks, and has a backlog of maintenance, according to Bockenstedt.

Timothy Potter, the vice president of Dowl-HKM and a longtime advocate of a stormwater utility, said the benefits he envisions would include cleaner stormwater runoff, less flooding, more greenbelts and lower overall operating costs.

He noted that Cuddy Family Park in Midtown was built to reduce flooding hazards in Midtown after drainage studies showed that the growth of commercial properties would worsen flooding in Fish Creek.

Potter is among a dozen members of a steering committee for a stormwater utility that met for the first time about two weeks ago. The steering committee includes representatives of the city, the building industry and the Anchorage Hillside.

One of the Hillside representatives is Mark Schimscheimer, a former member of a key Hillside roads and drainage committee who ran for Assembly in 2016.

Many Hillside residents already pay to address drainage issues in their neighborhoods, Schimscheimer said. He said he has open questions about the winners and losers in the utility proposal.

"Our fundamental question is, how is this going to benefit the Hillside?" Schimscheimer said.

He indicated he was looking forward to learning more in future committee meetings.