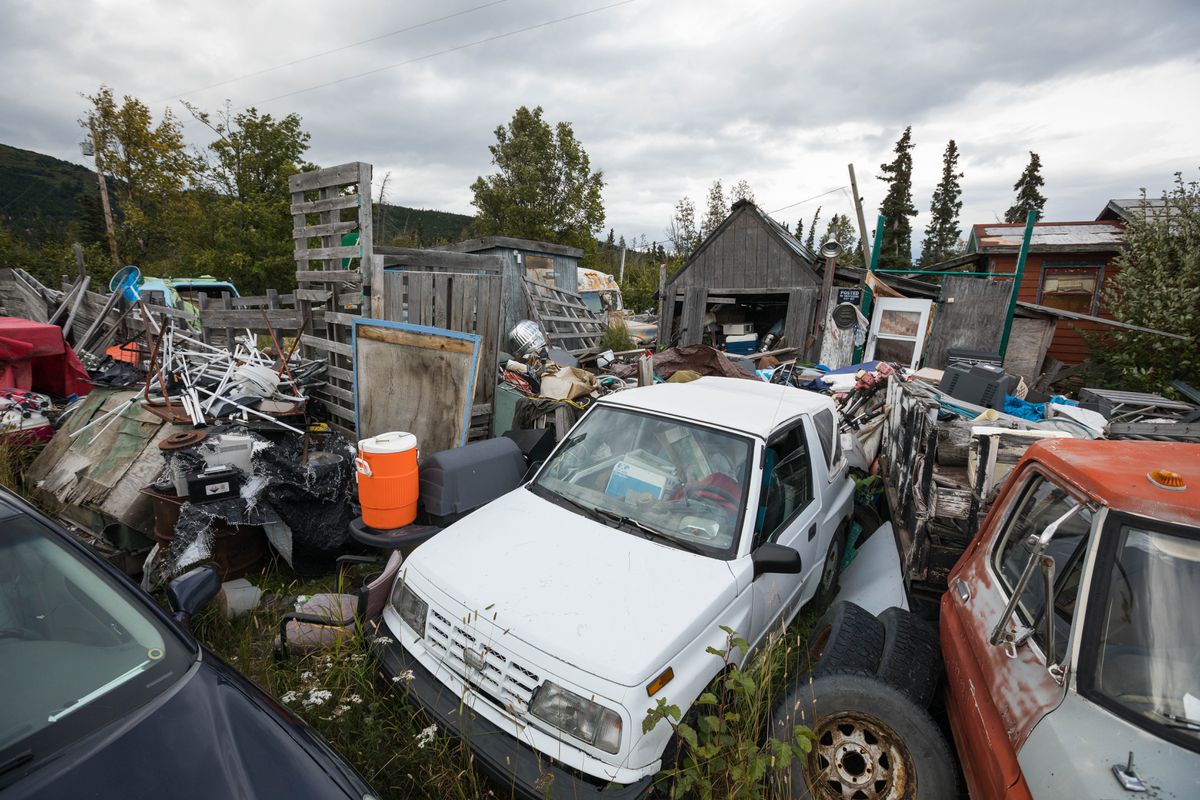 David and Jane Szabo’s property in Bear Valley, which is zoned R-6 for low-density residential, continues to be illegally operated as a junkyard seven years after the Superior Court ordered the Szabos to pay $311,000 in fines to the city for failing to remove junk from their property. The Szabos appealed the Superior Court ruling to the Alaska Supreme Court, which affirmed the lower court ruling in March 2014. (Loren Holmes / Alaska Dispatch News)

David and Jane Szabo’s property in Bear Valley, which is zoned R-6 for low-density residential, continues to be illegally operated as a junkyard seven years after the Superior Court ordered the Szabos to pay $311,000 in fines to the city for failing to remove junk from their property. The Szabos appealed the Superior Court ruling to the Alaska Supreme Court, which affirmed the lower court ruling in March 2014. (Loren Holmes / Alaska Dispatch News)

More than $300,000 in fines, an Alaska Supreme Court ruling and regular complaints from neighbors have so far failed to dislodge piles of junk and a collection of old cars from a yard in Anchorage's Bear Valley.

David and Jane Szabo have been told since at least 2002 to clean up what officials describe as one of the worst and longest-running examples of city junk storage violations.

Perplexed neighbors showed up to a recent Anchorage Assembly meeting to plead that elected officials do something. City attorney Bill Falsey, who started the job in 2015, said he hadn't been aware of the case until then. Now Falsey says his office is investigating what happened, and will take steps to enforce past court judgments and have the junk removed.

A former lawyer for the Szabos, Kenneth Jacobus, said his clients are good people who could not afford the cleanup. He said the case illustrates a broader problem in Alaska.

"A lot of old-time Alaskans have saved stuff for years, and then nobody comes after them," said Jacobus, a civil attorney in Anchorage. "Until, all of a sudden, the government, 20 years down the road, says you have to clean up the property.

"And they don't have the money to do it."

The property on Francesca Drive is on a dirt road leading up into the mountains. Last week, rusting trucks and cars blocked off the entrance, along with piles of building materials, electronics, washing machines, filing cabinets and pieces of metal.

There was no clear path to the main building, a green and red ranch-style house with a slightly sagging roof and a brick chimney. A white door hung sideways on hinges in front of a tapestry in what looked like a gray arctic entry. "No trespassing" signs were posted.

In Bear Valley, where thickets of trees separate homes on large lots, it isn't unusual to see stuff piled up in yards around sheds, or multiple boats and vehicles in and around driveways. But the Szabo property has long stood out.

"It's an honest-to-goodness junkyard," said Jack Frost, the city code enforcement officer. "It's like going to a junkyard and trying to clean it up. It's a dandy."

In 2002, the city got a complaint that David Szabo was using the residential property as a junk and salvage yard, according to court documents. It wasn't long before the city sent a letter informing Szabo that he was violating city zoning laws. He was given 10 days to remove the cars and junk before the city started issuing fines.

Szabo began working with the city on a cleanup. But records indicate he made slow progress. A May 2003 inspection revealed 24 vehicles on the property, as well as car parts, construction and metal materials, plumbing supplies, electrical parts, electronics and household items. The city began fining the Szabos $250 a day for zoning violations.

A front-page story in the Anchorage Daily News on June 17, 2009, declared, "City says it will move junk if homeowners refuse." Litigation began the following year. The Szabos argued in part that the fines were excessive and unconstitutional.

The case went all the way to the Alaska Supreme Court. In 2014, the court ruled against the Szabos.

Today, the $311,000 in fines remains unpaid, and little has changed at the property, Frost said. City attorneys don't have a good answer as to why.

Frost said the city's priority is not to collect the fines. He said the city just wants the junk removed. It affects quality of life and property values, he said.

"In this case, we've used all the tools available to us," Frost said. He said it's up to the city attorneys to figure out the next steps.

At the Anchorage Assembly's meeting on Sept. 12, Leonard Stanley Sr., who has lived in Bear Valley since the 1980s, stood before the Assembly members and asked for something to be done.

South Anchorage Assemblyman John Weddleton said there are many cases in Anchorage of people not responding to fines. But he called the Szabos an "unbelievable, extreme example."

Stanley moved to the subdivision during the construction of the trans-Alaska pipeline. A nearby four-bedroom ranch-style house, built in 1968, was occupied by renters then. The property backs up to a creek.

It all changed when David Szabo moved in, Stanley said.

"Since he came," Stanley said, sitting in his living room last week, "things happen that are just not normal."

A phone number listed for the house on Francesca Drive was disconnected. Messages sent to David and Jane Szabo were not returned. Another family member declined to comment, directing questions to Jacobus, the attorney.

It isn't clear who lives at the home now. Jane Szabo, a former Anchorage Daily News employee, is listed as the sole owner. David Szabo owns several pieces of property in Nikiski, on the Kenai Peninsula, records show.

Stanley said David Szabo referred to himself as a "Hungarian gypsy." Public records show Szabo once registered a business called Gypsy Trader, though it wasn't clear what the business did or where it was located.

Jacobus, who represented the Szabos in the Supreme Court case, disputed the idea that David Szabo was running a junkyard business in his yard. He said he believed Szabo thought the materials he was storing might be useful or sellable someday.

Jacobus has represented other clients in property cleanup cases over the years. It comes down to a financial decision, Jacobus said, for those who can stand living in what he called a "hoarder atmosphere."

But Jacobus said he suspected the junk would stay there, eventually rusting into the ground, if it weren't for the complaints of neighbors.

Stanley, the neighbor, said he'd been making calls and writing letters for more than a decade. At one point, Stanley said, David Szabo told him that he could do what he wanted with his private land. Stanley said he told Szabo he should take his belongings somewhere else.

"It's the wrong place," Stanley said. "This is a community. People live here."

Court records estimated the cleanup costs at about $50,000. The city doesn't have a fund dedicated to such cases, said Frost, the city code enforcement officer. He said federal grants were once available to clean up blighted areas but that's no longer the case, and it's not clear such a grant would apply here.

Even if money were available, Frost said, it's an open question why other taxpayers should subsidize the removal of junk from a property when the owner is flouting the law.

Falsey, the city attorney, said Monday he planned to reach out to Jacobus to see if the two sides could come to a resolution.

If not, Falsey said, the city would likely begin petitioning the court to execute the 2014 judgment. That could involve seizing assets to pay for the cleanup, Falsey said.

He said the matter won't end until the junk has been removed, and it could become a model for similar cases in Anchorage.

Stanley is holding out for change. He said he and his wife have spent a large part of their adult lives looking at the Szabos' property.

"I wish it would disappear," Stanley said.