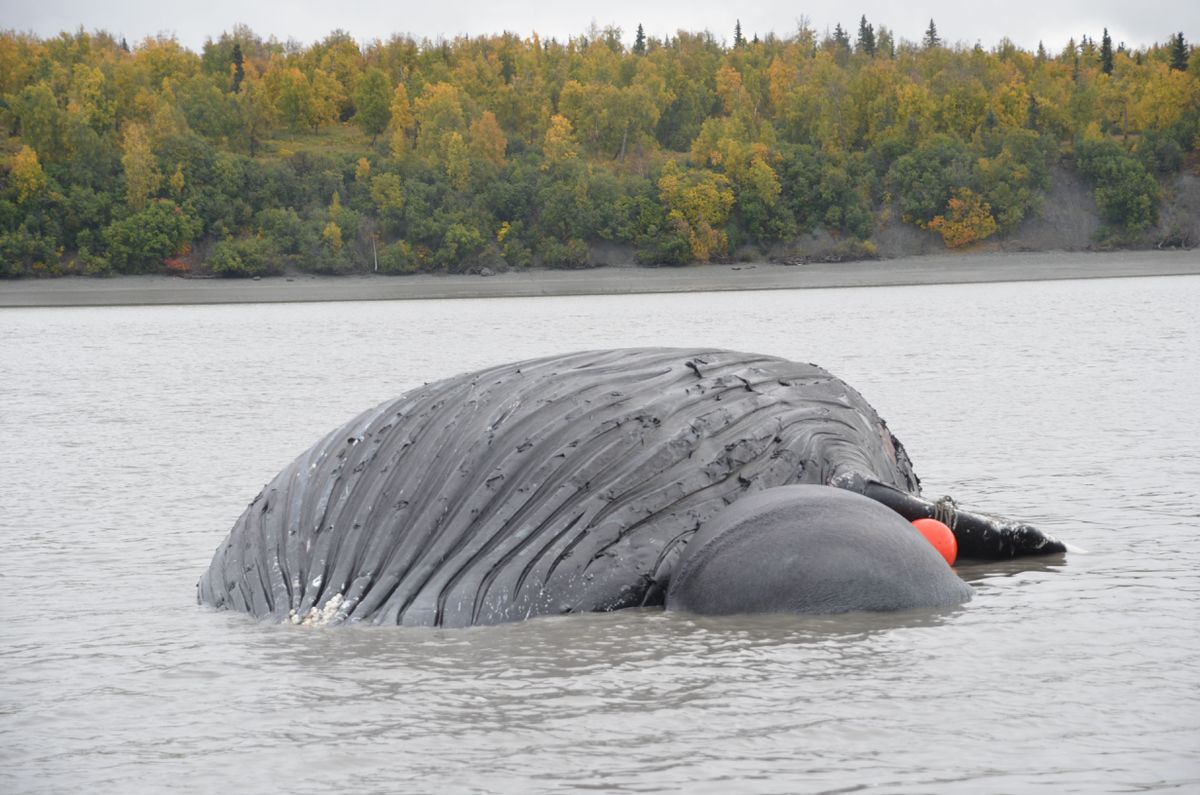 A dead humpback whale was spotted near the Port of Anchorage in Cook Inlet on Saturday, Sept. 16, 2017. (NOAA Fisheries/MMPA/ESA Permit #18786)

A dead humpback whale was spotted near the Port of Anchorage in Cook Inlet on Saturday, Sept. 16, 2017. (NOAA Fisheries/MMPA/ESA Permit #18786)

With a dead humpback whale floating near the Port of Anchorage, a spokesperson for the National Oceanic and Atmospheric Administration said Tuesday the agency will "let nature take its course."

"So we are well aware of this dead humpback whale," she said.

Speegle said biologists don't know the age of the whale or its cause of death or its exact size, but they do know it was a male.

She said people have spotted the dead whale floating in the waters from the Knik River to around Point MacKenzie, and to the Port of Anchorage area.

"It will likely continue to go back and forth with the tide," she said.

Speegle said staff at Joint Base Elmendorf-Richardson boated out to the carcass Monday and collected skin and blubber samples. They also hooked an orange buoy to its flipper to make sure boaters can see it.

Jim Jager, director of external affairs for the port, said he did not believe the whale posed a hazard to the large vessels in the area.

"It's probably a navigational hazard if you're in a kayak or a powerboat, but for a ship — not so much," he said.

Speegle said it's unclear how the whale's body got to Knik Arm.

"At this point, there's no way to know if it actually swam up Cook Inlet by itself or just floated in with the tide and perhaps expired elsewhere," she said.

Mandy Migura, marine mammal stranding coordinator for NOAA Fisheries Alaska, said "it is not common for whales to come up Knik Arm." However, she said, the agency has recently received more calls from the public about whales in the area, including a gray whale in July and another in early September.

"We don't know if that's because people are more aware of the need to call us to report sightings, or it is possible there are more whales, or it could be attributed to environmental changes, or some other factor," Migura said.