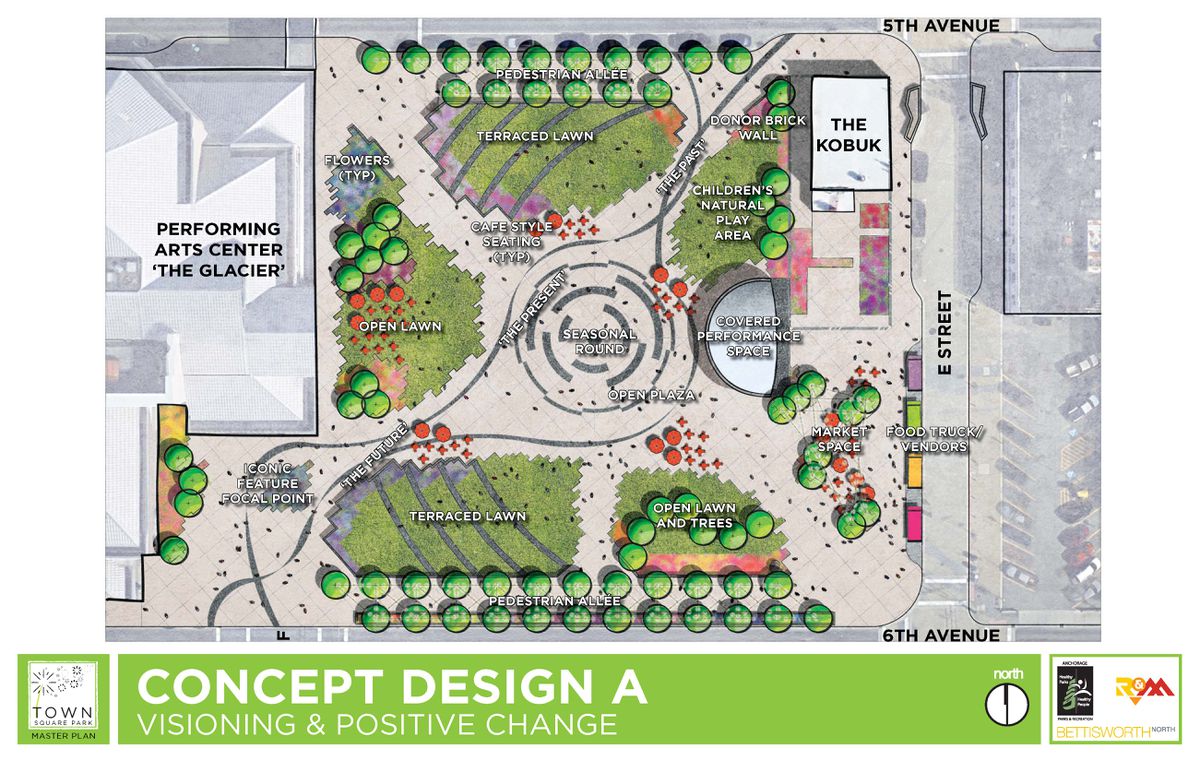 Flatter hills, more walking paths and a covered performance area could be in the future for Anchorage's Town Square Park, as city officials try to make the downtown square a more inviting place.

The city recently released two design concepts for Town Square Park, the latest effort in a crusade to fundamentally alter the character of the nearly 30-year-old green space and plaza. It opened in 1991 as an oasis from fast-growing metropolitan surroundings. But police and business leaders say the square now attracts too much drug use and disorder, and last year, the administration of Mayor Ethan Berkowitz began a project to "reimagine" it.

In city-hosted workshops and surveys since May, older residents wanted to keep the feel of an oasis, said Steve Rafuse, park planner for the city. Younger families and millennials, meanwhile, wanted a more active space. The two new design concepts try to strike a balance, Rafuse said.

"We're trying to honor the original intent of the park … but making sure we are still serving the needs of the people," Rafuse said.

The designs, marked "A" and "B," contain subtle differences in the location of terraced and open lawns, the center plaza and spaces for children, performers or people playing board games.

Neither proposal would be a "radical, radical change," Rafuse said. The biggest shift involves lowering the hilly berms that surround the park to about half the current height, from 6 feet to about 3 feet, he said.

Over the years, the berms, which buffer the park from the noise of the city, have also been associated with illicit activities like drug use. A University of Alaska Anchorage professor used Town Square as a case study for problems in urban parks, and the Anchorage Police Department unit that tackles community issues studied the park and determined the physical design of the park was contributing to bad behavior.

Last summer, Mayor Ethan Berkowitz, who came to office pledging improvements in public safety and downtown development, ordered the removal of the broken concrete fountain in the middle of the park. The mayor said the back of the fountain was a hiding place for illegal activity.

"Town Square shouldn't be a hostel," Berkowitz said at the time.

Since the spring, the city has held a number of workshops, sent out a survey and consulted with a committee, in addition to groups of downtown business owners and social service providers. More than 600 people responded to an online survey about the future of the park, Rafuse said.

An intern from UAA also went to Town Square regularly to talk to people hanging out there, Rafuse said.

Now officials want feedback on the two designs, which came out of the public workshops. One of the two designs shows an artistic centerpiece linking walking paths in front of a performance area, open lawns and terraced seating. The other contains a fountain and a children's play area, and a larger lawn space.

The city plans to pick a preferred design for a broader master plan for Town Square by October. At least two different commissions, and then the Anchorage Assembly, will need to sign off on it.

"The whole idea is to keep refining and refining," Rafuse said.

It's yet not clear what would happen with the plan once it's adopted. There are no cost estimates yet, and money is tight.

Some of the proposals, such as food trucks and more cafe seating, could happen right away, Rafuse said. Bigger-ticket changes, like the lowering of the berms, don't have a clear timeline yet. City officials will need to drum up public support for funding such a project, Rafuse said.

Find more information about the project and give feedback on the designs on the website for the city parks department at muni.org.