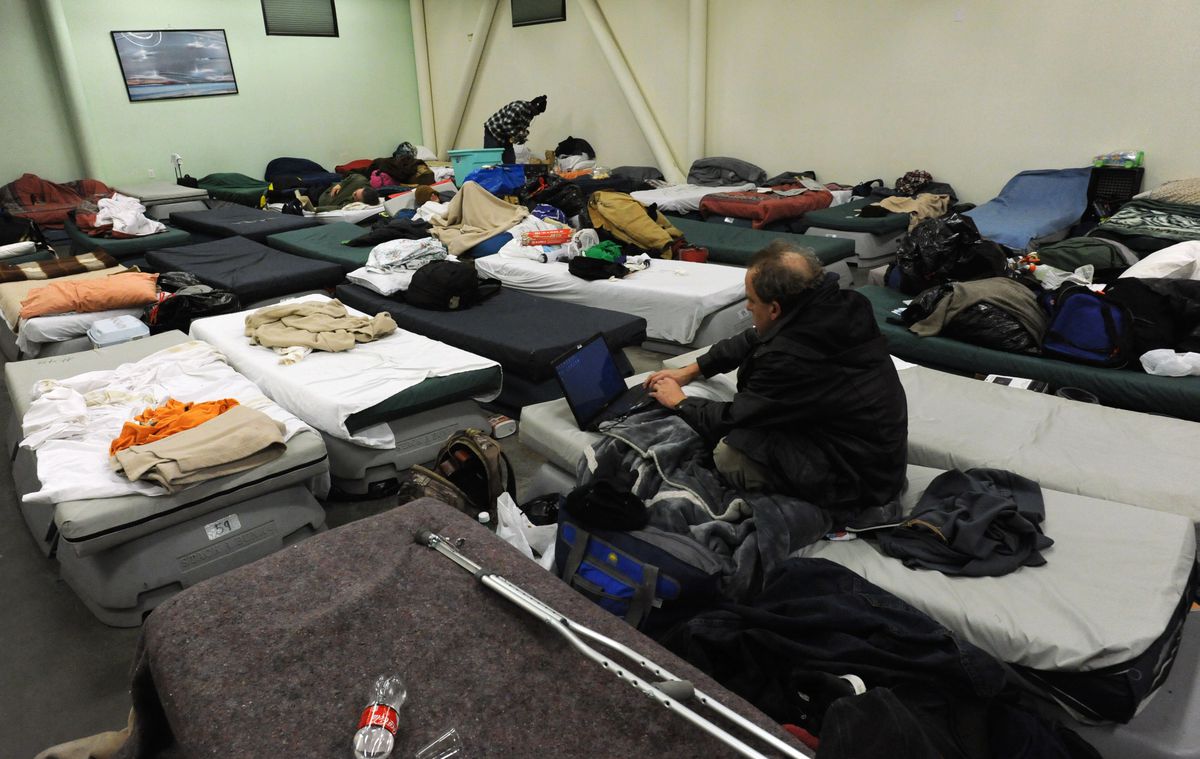 The shelter recently won a $50,000 grant from the Alaska Mental Health Trust Authority for what it's calling the "Improved Sleeping Conditions" project. The grant will help pay for bunk beds and small storage units with locks, plus a few thousand earplugs.

"The combination of bedbugs, close sleeping quarters and fear of theft creates poor sleeping conditions for the very vulnerable members of our community," Catholic Social Services, the agency that runs the shelter, wrote in the grant application.

Only a portion of the nightly shelter users will have access to the bunks and the security lockers. But it's a start, Caldeira said.

More than 3,600 people sleep at least one night at the Brother Francis Shelter throughout the year. The shelter is at the nexus of the city's strategy for moving people out of illegal camps and into housing.

['This is a crisis': A day of chaos and confrontation outside Anchorage homeless shelters]

But many avoid the shelter and prefer to camp in the woods or on the street. In interviews, worries about bedbugs and theft often come up.

In the grant application, officials acknowledged security issues and a "drastic increase" in the extent of the shelter's bedbug infestation in recent years.

Caldeira said the shelter fights bedbugs with twice-weekly chemical sprayings and dryers for belongings, sheets and towels. But the problem hasn't gone away.

She said the new bunk beds are made by Central City Concern, a nonprofit that builds affordable housing in the Portland area and has developed its own "bedbug-resistant" bunks and other equipment.

The metal beds give bedbugs fewer places to hide and breed, according to the Anchorage shelter's application. Angled legs are harder for bugs to climb, and the bunks will be easier to clean, Caldeira said. Officials also want to create more space around sleeping areas.

Shelters elsewhere in the U.S. have made similar upgrades, according to the shelter's grant application.

The bunks replace cots in what's known as the dormitory area of the Brother Francis Shelter. Right now, it holds 63 beds for men and 24 for women.

The dormitory isn't for everyone. Beds are assigned to people who are volunteering or working at the shelter or working with a case manager and saving toward moving out. Shelter staff also save spots for first-time shelter visitors.

Floor mats will still be used in the front part of the shelter, which sleeps the most people, including highly vulnerable shelter users. Caldeira said shelter officials haven't discussed a plan for that area, but the long-term goal is better sleep quality.

"I doubt that we will stop here," Caldeira said.

She said the beds should be assembled by mid-January.