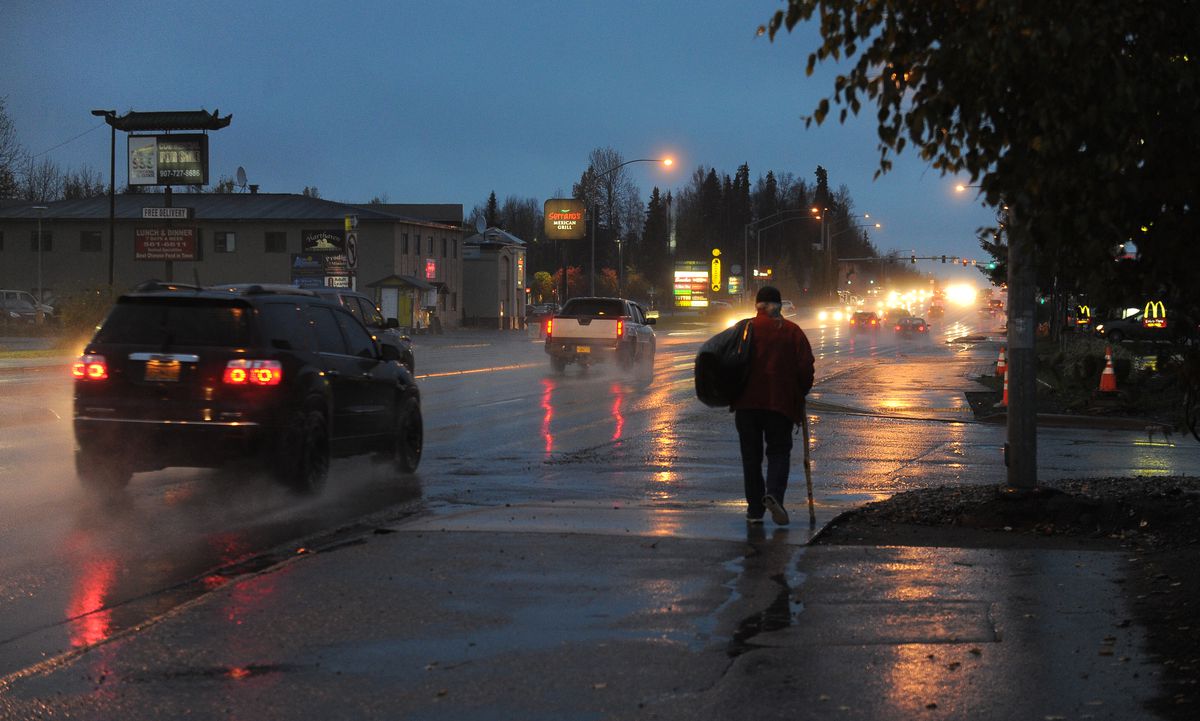 With his sleeping bag over his shoulder, Doug Shepard walks away from the Anchorage Gospel Rescue Mission along Tudor Road in Anchorage. Shepard, who is homeless, has timed out at the mission. (Bob Hallinen / Alaska Dispatch News)

With his sleeping bag over his shoulder, Doug Shepard walks away from the Anchorage Gospel Rescue Mission along Tudor Road in Anchorage. Shepard, who is homeless, has timed out at the mission. (Bob Hallinen / Alaska Dispatch News)

More than 650 names make up a confidential list that ranks the most vulnerable homeless adults in Anchorage.

Homan is 49, with a graying mustache and clear blue eyes. He's a big, burly man. He boxed — first in school, then in prison. He camped on and off for years along Campbell Creek and panhandled on street corners. In January, his wife died, and he had heart surgery several months later. His fragility pushed him to the top of the vulnerability list.

This spring, for the first time in his life, Homan signed his name on a lease. With the help of a caseworker and subsidies, Homan moved into an apartment in a building near Sixth Avenue and Gambell Street.

Homan is one of about 40 adults who have been housed in 2017 directly through Anchorage's vulnerable homeless list. The list officially launched in January. It ranks people by time spent on the street, critical health conditions and factors like a history of mental illness or substance abuse.

Part of a national approach to fighting homelessness, the list allows Anchorage agencies to share data to more quickly find housing for chronically homeless people, including youths and families. The social service organizations and caseworkers are using it to try to improve the lives of some of the city's most entrenched homeless people, including some high users of emergency resources.

A group of agencies meets privately twice a month to discuss people on the list and their whereabouts. It's a massive challenge to get everyone on the list into housing, part of a city goal of moving people out of illegal camps and emergency shelters. At the very least, not everyone qualifies or can even be tracked down. A lot of people are waiting.

There have also been a few quiet successes so far, like Homan, people for whom the system worked.

On a rainy Thursday night in October, social worker Tanya Vandenbos stood with a clipboard in the main lobby of the Anchorage Gospel Rescue Mission as a line formed in front of her.

The Tudor Road shelter is just one of the places Vandenbos hopes to meet people she can help.

She has an office in the Anchorage Police Department headquarters. Earlier this year, Vandenbos became the first social worker to be placed there to work directly with police on canvassing homeless camps. Before then, it could have taken days for a social worker to show up to a camp after police visited it and posted an eviction notice.

A smartphone app allows Vandenbos and the police to mark homeless camps and to store data collected about people there. The data feed into the vulnerability list. People are ranked by a variety of factors, including the length of time they've been homeless, as well as substance abuse disorders and mental health problems.

The list is supposed to track and shepherd chronically homeless people through a complex network of housing subsidies, grants and appointments. Other cities around the country began to adopt the system in 2012. Anchorage has been slowly piecing its list together for years.

There's no cutoff. The list keeps growing, and as some people come off, more are added. About one-third of the people who came off the list this year were marked as "self-resolved," meaning they moved in with family or left town.

Others have real difficulty finding their way off the street. That's where social workers like Vandenbos have begun to enter the picture.

The first man Vandenbos met wore a blue kuspuk and walked with a cane. On his side, he said, a patch of his skin was turning black. He told Vandenbos he'd been homeless for five years.

"Housing won't happen overnight, but I really recommend getting on it," Vandenbos said to him. "Because it won't happen at all if you're not on the list."

Doug Shepard, 68, told Vandenbos he was camping outside at night because he'd overstayed the shelter's 30-day time limit. He's retired and has a lot of medical problems, he said.

Vandenbos asked if he'd ever talked to someone about the list. He thought he had, several months ago. He got a number to call. But he never got through to anyone.

Vandenbos said she would call for him and that if he didn't hear by Friday, he should call her cellphone.

"I'm Doug, and I make nice sticks," Shepard told her, by way of helping her remember. He carried a birch walking stick with intricate carvings, including the names of friends who had died from alcohol abuse.

When 7 p.m. hit, Shepard walked out into the rain, a black trash bag slung over his shoulder. He was heading out to look for a place to camp in the woods.

From camp to apartment

Walter Coppock's name was one of the first to go on the city's early list of vulnerable homeless people. "Chaco," as he's known, most recently made camp along Ship Creek near downtown Anchorage. He's well known to social service agencies as a longtime camper.

As Coppock tells it, his life has included running away from an abusive Catholic boarding school in South Dakota, hopping trains to join civil rights protests and working for a carnival show.

When 325 E. Third Ave., a RurAL CAP building for the chronically homeless, was under construction, Coppock used to walk up the hill from his camp and badger the construction workers. He told them to hurry up on it because he wanted to live there.

Coppock got his wish. In November 2016, Coppock moved into the RurAL CAP building. He pays $340 a month in rent, or 30 percent of his income, drawn from disability and Social Security.

[Apartments for Anchorage's long-term homeless open up near downtown]

The first night he could use his new apartment, Coppock returned to his old camp in Ship Creek, because it was familiar. That happens often, said Corinne O'Neill, director of supportive housing at RurAL CAP. Many longtime campers have trouble coming off the street.

But after one wet and damp night there, Coppock hasn't gone back.

While he was camping, he struggled with alcohol. Now he's been sober for months, he and his case managers say, though he doesn't need to be to live in his new apartment.

"I'm happy to be alive," Coppock said, sitting recently in the building's conference room. He wore his long white hair in a ponytail under a hat with the letters "ATF" on it.

The vulnerability list gives people access to housing placements, not substance abuse treatment. But there's new money to join the two pieces, through a $2 million federal grant announced last week by the nonprofit Cook Inlet Tribal Council. The agency plans to offer substance abuse and other treatment services to the homeless, with a focus on Alaska Natives.

As part of the same grant, RurAL CAP is hiring someone to do a job similar to Vandenbos', to try to get people from the vulnerability list to agencies that can make housing placements.

In a conference room at the Brother Francis Shelter, where he used to spend a lot of time, Homan sat at a table and reflected on the way his life has changed in a year.

He got to Alaska in 1989. He hitchhiked from Ohio when he was 18 because, he said, the cops were after him. By then, he was addicted to cocaine. He spent the next several decades in and out of prison and has several felony convictions.

Homan fought with his wife, and when she died in January they had not lived together for years. But they often drank coffee together at her home. She had supported him for a long time. It shocked him when she died, he said. He barely ate for two months. Then his heart failed.

Placed on the top of the vulnerability list for his medical fragility, Homan was assigned to Dawn Furnish, a caseworker at Catholic Social Services.

When he became her client, Furnish contacted a property manager she knew who had a unit open. They completed a flurry of paperwork. Homan got the place. Furnish has helped him with everything, from shopping at the food pantry to visiting thrift stores for shoes and a TV.

"Whatever he needs," Furnish said. She has a credit card that draws funds from the system that manages the vulnerability list. Homan's $875 monthly rent is being paid by Catholic Social Services, as well as his bus passes and nine types of medication.

Homan's last job was washing dishes at Peggy's Restaurant, but he can't keep his mind focused on a job, he said. He isn't panhandling anymore. He wears nicotine patches on his tattooed arms to try to quit smoking. He stopped drinking.

"I'm just trying not to mess up," Homan said.

Furnish said she's really proud of him. He's a good cook, and every time she goes over to his new place, he has a pot of food cooking on the stove.

Homan is one of three people on the vulnerability list whom Furnish has housed. They are the successes, but it hasn't always worked out so well. Furnish got two other clients around the same time as Homan.

She looked and looked for them. She called and left messages and notes. Nothing. Everyone gets up to a month to respond, she said.

Then she has to move on to the next person on the list.