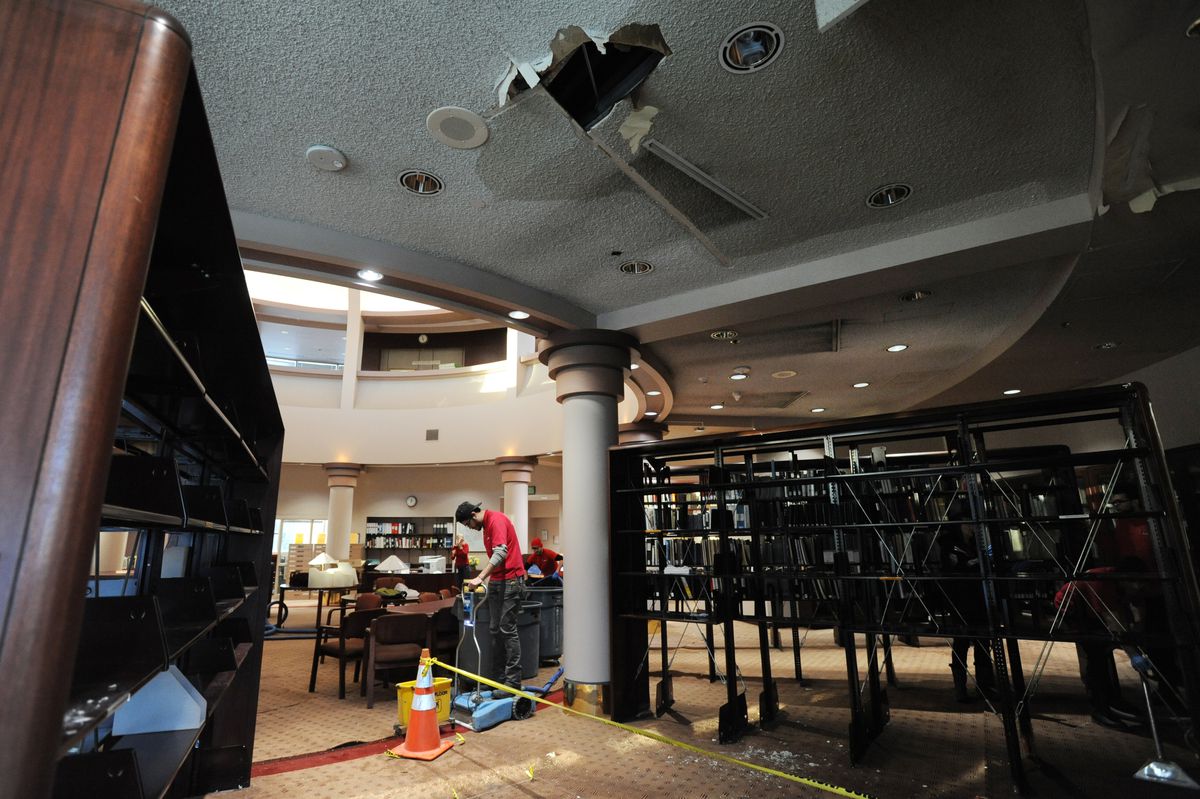 Noah Freeman of Taylored Restoration vacuums up water from a burst heating pipe in the Alaska Collection at the Z.J. Loussac Public Library on Tuesday, Dec. 12, 2017. (Bill Roth / ADN)

Noah Freeman of Taylored Restoration vacuums up water from a burst heating pipe in the Alaska Collection at the Z.J. Loussac Public Library on Tuesday, Dec. 12, 2017. (Bill Roth / ADN)

A broken pipe above the Loussac Library's Alaska Collection sent water flooding onto a bookshelf and into basement archives Tuesday, setting off a massive scramble to save some of the Midtown Anchorage library's rarer materials and records.

"It was all hands on deck," said Virginia McClure, assistant library director.

Library staff discovered the flood early Tuesday morning. After an early scare, it appeared by noon the damage was not as extensive as McClure and other library officials feared. Boxes containing books and other materials absorbed much of the water, said Arlene Schmuland, an archivist from the University of Alaska Anchorage who came in to help.

At least one bookshelf in the Alaska Collection, located in the circular east wing of the library, got wet. Directly downstairs, water dripped through the ceiling and onto boxes of archives, including records of government meetings and studies.

The Anchorage Museum has volunteered to freeze damaged library materials, McClure said. That process can delay the formation of mold.

The carpet in the cavernous rotunda room will also likely have to be replaced, said Clare Ross, the library's development director. Close to 2 inches of water had pooled onto the floor by the time the broken pipe was discovered.

Ross arrived at work at 8 a.m. and heard what was happening. She immediately grabbed a cart and rushed in to start grabbing books from shelves and moving them out of the way.

Three carts of books were found to have damage, said Jill Galbraith, adult services librarian. Some books were replaceable, she said, but others, including one outlining stories and traditions of the Haida tribe, weren't easily found elsewhere.

Downstairs around noon Tuesday, a vacuum truck from Taylored Restoration ran a blue hose into the library chambers. More than a dozen people were sorting through books, assessing damage and making decisions about what to save. One cart held damp government records and microfilm, waiting to be sorted.

Walking through an open door into a climate-controlled room labeled "Vault," McClure pointed to a back shelf area where water had seeped in. That section of the room housed editions of journals by the adventurer Captain James Cook, which escaped damage, McClure said.

But some less-rare books on the lower shelves did get wet, McClure said. She said the water also dripped onto some maps.

Outside the vault, McClure held up a copy of a book titled "John Muir," with the dark stain of water at the bottom.

McClure said it appears the damage could have been far worse. She also noted the quick response by library staff.

"People in every part of the library were in here drying off DVDs and moving things out of the way," McClure said.

What caused the pipe to break wasn't immediately clear Tuesday, though Ross said the Alaska Collection section of the library is about three decades old. Officials were still figuring out the total cost of repairs.