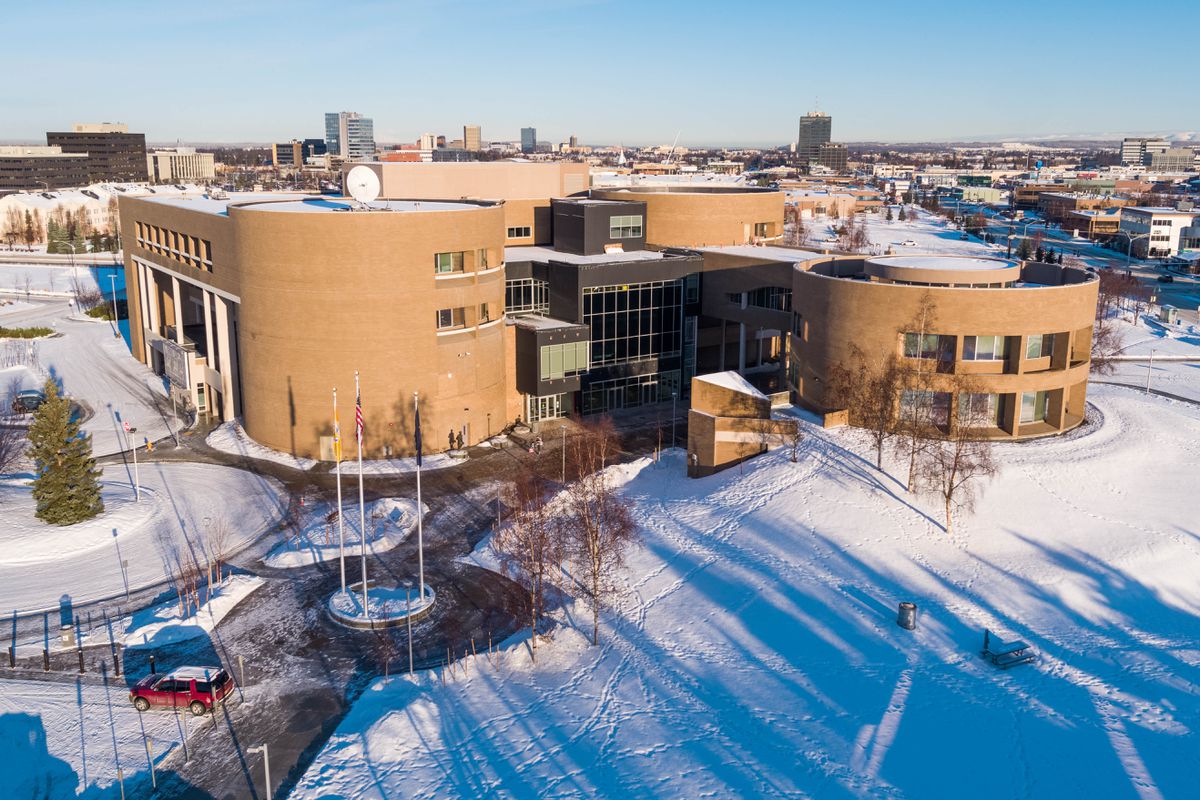 The Loussac Library in Midtown on Feb. 13 (Loren Holmes / ADN)

The Loussac Library in Midtown on Feb. 13 (Loren Holmes / ADN)

Contractors working on the still-unfinished renovation of Anchorage's Loussac Library say the city owes them an extra $1.6 million for added work and scheduling delays, documents show.

Anchorage-based Pinnacle Construction filed the claim on Jan. 19. A claim is an intermediate step before a lawsuit.

If the city agrees to pay the claim in full, it would amount to a substantial cost overrun for a project that is maxed out at $15 million. A relic of the public facility construction boom of the 1980s, the Loussac Library had seen little significant work until the start of the renovation in 2015. Most of the money came from the state government.

Demolishing a much-maligned staircase and second-story entrance was the most visible part of the work. The contractors also built a new ground-floor entrance and plaza, new book drops and a material handling system and several new elevators, as well as new meeting rooms for city executives and elected officials.

[Photos: Loussac Library reopens with a new lobby and a striking sculpture]

Owens said the city is impressed with the workmanship on the construction. But the project deadline was in April 2017, more than a year ago. Pinnacle Construction and the subcontractors on the project can be on the hook for damages if the project isn't finished on time.

According to documents submitted to the Anchorage Assembly, Pinnacle Construction says the city demanded additional work outside of what the contract called for.

Inefficient work scheduling led to lost productivity and other delays, the documents show.

While the library held a grand opening for the new entrance months ago, tile work on the outside of the building has yet to be completed.

The tile was ordered from Italy and processed through a company in New Jersey, said Alan Czajkowski, the director of the city's public works department. Delays in the original schedule of the project caused Anchorage to be moved to the back of the line, Czajkowski said.

To help respond to the claim and decide how much is owed, the city is hiring a Seattle-based claim consulting company to interview project staff and designers and examine records. The Assembly authorized up to a $100,000 contract with the company, McMillen Jacobs Associates, on Tuesday night.

"This will improve the chances of working out our differences without going to court," Owens wrote in the request to the Assembly.

Owens declined to provide a copy of the claim from Pinnacle, saying the city had "reasonable anticipation" of a lawsuit. But he said the paperwork was about 2.5 inches thick. The amount in the claim is equivalent to about 11 percent of the project's overall budget.

City manager Bill Falsey said Tuesday the money to pay the claim would have to be shifted from elsewhere in the city budget.

"It wouldn't be painless," Falsey said. "It would have to come from somewhere."

Planning for the Loussac renovation began in 2014. The city signed the contract with Pinnacle in April 2015.

The budget at the time was $13.5 million. Three times since, the Assembly has authorized the city to beef up the budget to what it is today, $15 million.

The latest requests to the Assembly for additional money described the project as "very complex with numerous moving parts." One cited unknown structural issues that needed repairs and hidden electrical and plumbing lines that weren't located on the original drawings.

Owens said it's normal for a major construction project to encounter unexpected problems that add costs.

In August, the city paid $5.1 million to the contractor of the new Municipal Light & Power Plant to settle claims related to missed deadlines. The plant had cost about $306 million overall. The contractor, Quanta Power Generation, originally demanded more than $10 million in extra compensation.

But in the case of the Loussac renovation, Owens said the size of the Pinnacle claim was "unexpected."