Train strikes and kills woman on tracks in South Anchorage 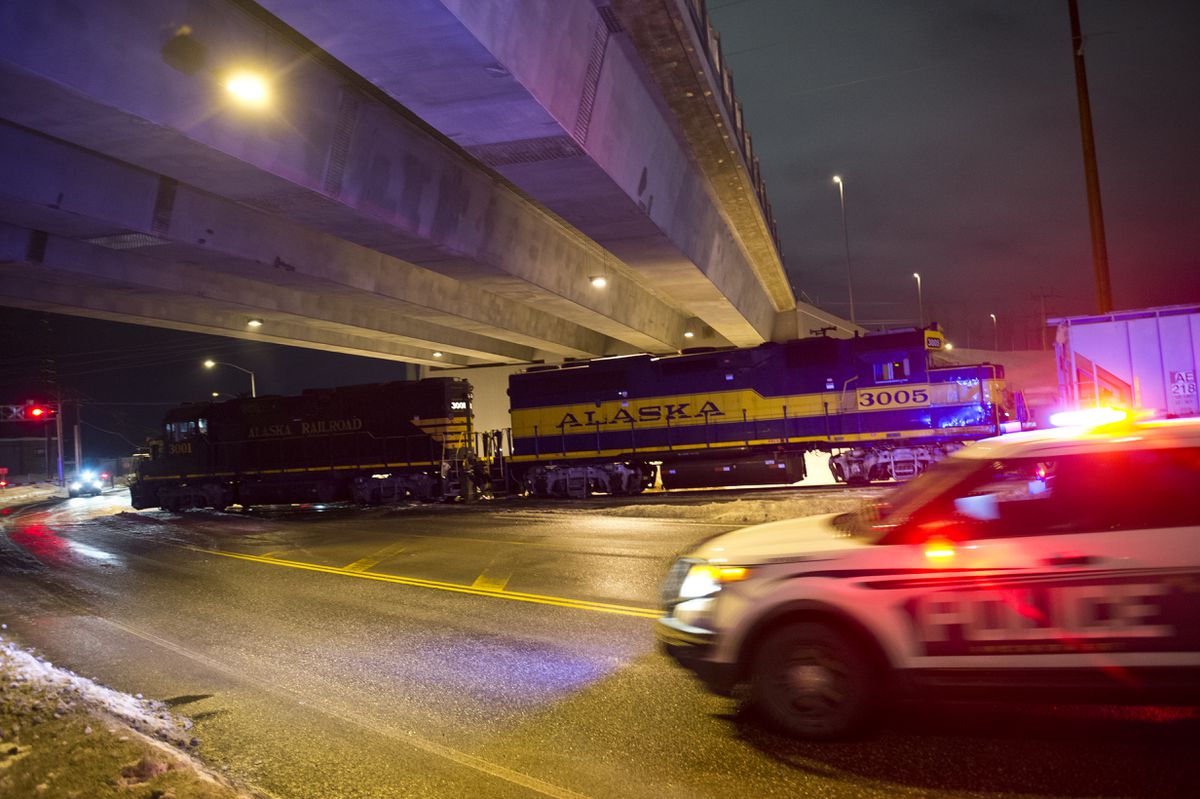 An Alaska Railroad train is stopped on Arctic Boulevard under the Dowling Road overpass. Anchorage Police said a woman was struck and killed by a train Tuesday evening. (Marc Lester / ADN)

An Alaska Railroad train is stopped on Arctic Boulevard under the Dowling Road overpass. Anchorage Police said a woman was struck and killed by a train Tuesday evening. (Marc Lester / ADN)

An Alaska Railroad train struck and killed a woman who was on the tracks near Arctic Boulevard and the Dowling Road overpass Tuesday evening, railroad officials say.

Alaska Railroad employees stopped the train and reported the incident at about 8 p.m., according to Anchorage Police Department spokesman MJ Thim.

The train was a northbound freight from Whittier to Anchorage.

"She was in the middle of the tracks," said Alaska Railroad spokesman Tim Sullivan. He didn't immediately know whether the woman was walking, standing or lying down.

The train was going 34 mph at the time, Sullivan said. The closest crossing — at Arctic and Dowling — is signaled, so the train didn't sound its horn. The woman was in a darker section of track.

It can take the length of several football fields for a moving train to stop, he said.

The woman was not immediately identified.

Her death marks the third train-related fatality in two years and the 14th since 1985, according to Alaska Railroad statistics. A man was struck by a train north of Seward in 2016, and a snowmachiner in North Pole riding in the right-of-way hit a piece of equipment buried in the snow and died when he was thrown from his sled, Sullivan said.

The last fatal incident he remembered in Anchorage was in 2009, when a woman taking photographs at Potter Marsh didn't hear a train coming. A man also died on the tracks that year near Montana Creek north of Willow after he tried to save his dog from an oncoming train.

Railroad employees involved in "critical incidents" like this one get three days of administrative leave — more if a health care professional says they need it, Sullivan said.

"It's just an awful situation," he said. "Every single one of them is tragic … for friends and family and it's pretty tough on our crews as well."

Vehicle traffic was stopped at the crossings at Arctic Boulevard and C Street for several hours while the incident was investigated by Alaska Railroad and city police.