Her brother started hearing voices. Then he disappeared in Anchorage. 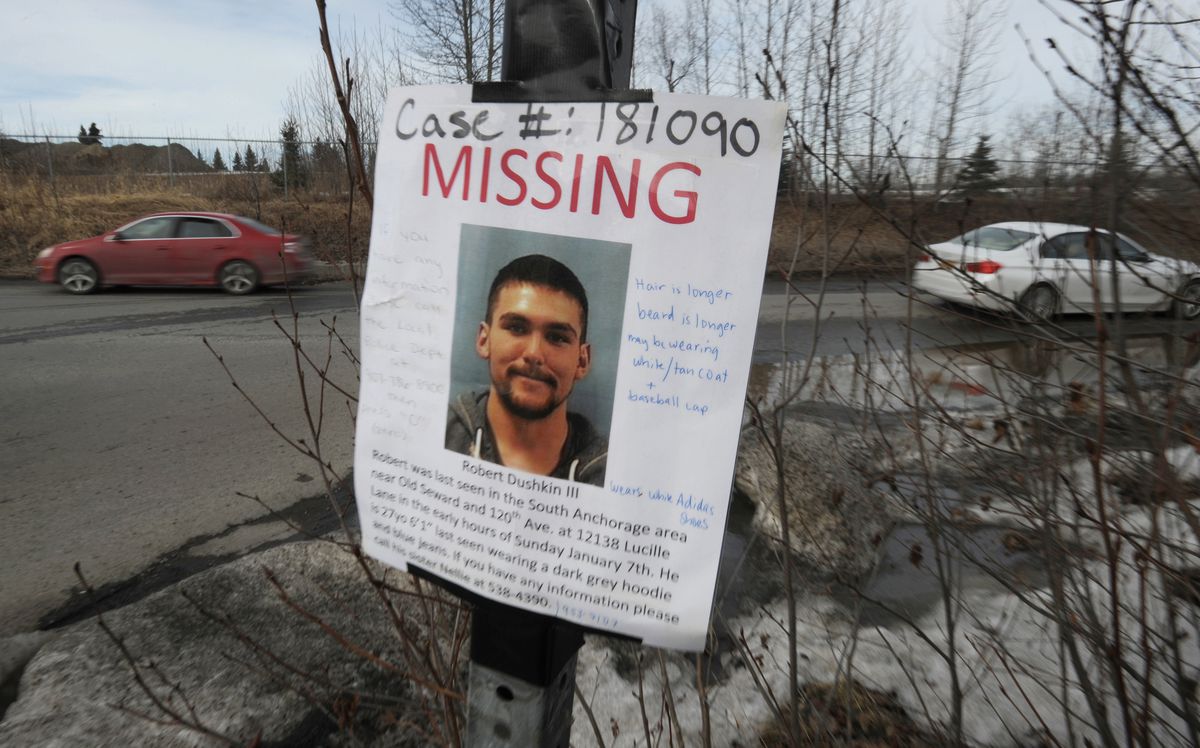 Early on a cold morning in January, Robert Dushkin III walked outside a family friend's house in South Anchorage to smoke a cigarette.

He never came back.

Three months later, the 28-year-old has not been seen or heard from and the Sand Point man's family is redoubling their efforts to find their missing brother.

"We just don't feel good about it," said Dushkin's sister Sandra Simons, who lives in Soldotna.

They are especially worried because Dushkin had been showing new, frightening signs of mental illness in the weeks before he disappeared.

Two weeks before Dushkin went missing another sister took him to the emergency room at the Alaska Native Medical Center because he was hearing voices, she said.

He was given an anti-psychotic medication. He had an appointment with a psychiatrist scheduled for Jan. 16, Simons said. He went missing on Jan. 7.

When he went missing, he hadn't taken the medication for two nights because it made him tired.

"If he was upset — if the voices were saying, you're a bad person, you should lay down in a ditch and die — which is what he told my sister was happening when she took him to the E.R., we don't know what he would do," she said.

Dushkin is the youngest brother in a big Sand Point family, Simons said. He had worked as a commercial fisherman until he was arrested on felony assault charges in April 2017.

Court records say they are related to a domestic violence incident in Sand Point. He moved to Anchorage so he could be on third-party custodian monitoring while waiting for his trial, his sister said.

He has warrants out for his arrest for missing court dates related to the open criminal cases against him, but his sister doesn't think he's trying to hide to avoid going to jail. When he first went missing, Anchorage police said they did not consider him a danger to the public.

After he disappeared, the family spent 12-hour days driving the city, hoping to spot Dushkin at a bus stop or on a corner. There was a search party, organized by a volunteer group in Anchorage. The family has hired a private investigator and papered the city with missing posters. They've posted Dushkin's picture and story all over Facebook's missing-persons groups.

Leads have trickled in — a few people thought they saw him at a Huffman Tesoro station. They've checked homeless shelters. Nothing has turned out to be solid, though.

Simons says her brother looks like a lot of young guys in Anchorage: Dark brown hair that was getting a little shaggy, a short beard. He was wearing a plain gray hoodie, jeans and white Adidas shoes with black stripes the night he went missing.

The morning he went missing was 10-15 degrees, his sister said.
She's concerned that a Fred Meyer gift card she thinks he had on him when he disappeared has gone untouched. She's trying to get access to his bank accounts to see if he has made any transactions.

With three months gone by, Simons says the family wants to organize another search party. Simons said she's heard of hundreds of people showing up to search for missing people in Soldotna. She hopes people in Anchorage will do the same for her brother.