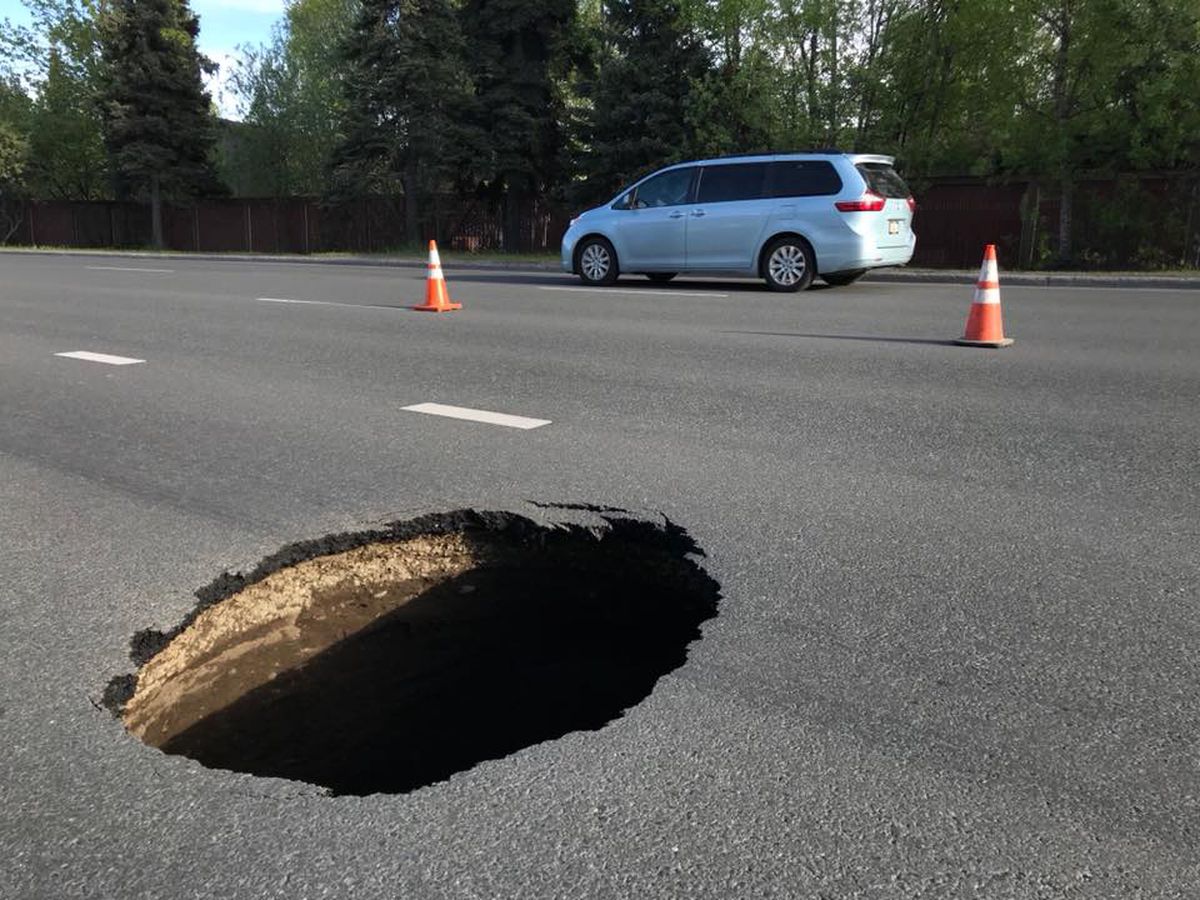 A sinkhole that appeared on West Benson Boulevard in Anchorage on Thursday, May 24. It was filled by the next morning. (Bill Roth / ADN)

A sinkhole that appeared on West Benson Boulevard in Anchorage on Thursday, May 24. It was filled by the next morning. (Bill Roth / ADN)

The big sinkhole that opened up on Benson Boulevard in Midtown Anchorage in late May was traced to one main culprit: a rotting steel pipe that dates back to the 1980s, officials say.

The sinkhole, nicknamed "Sinkhole de Mayo," didn't cause any crashes. It definitely wasn't as big as the massive sinkholes that periodically swallow homes and cars in the southern United States.

But it was one of the deeper voids state or city officials have encountered in Anchorage. The repairs cost nearly half a million dollars.

Officials described it as yet another sign of a looming crisis tied to the city's aging drainpipes, a concern that has sparked local efforts to create a special utility to pay for the repairs.

"I think this is the worry that all of us are having," said Jason Bockenstedt, deputy chief of staff for Mayor Ethan Berkowitz, referring to big sinkholes forming elsewhere in town. "It's just inevitable with how old some of the infrastructure is."

A sinkhole that swallows up a car, for example, "isn't necessarily out of the realm of possibility," Bockenstedt said.

Anchorage has some 600 miles of storm drains. The city owns about 60 percent; the Alaska Department of Transportation and Public Facilities owns the rest.

The Benson Boulevard sinkhole measured 5 feet in diameter and 15 feet deep. The state DOT owns the road and the pipes that run underneath it.

In this case, a galvanized steel pipe from the 1980s had rotted, said DOT spokeswoman Shannon McCarthy. Water seeped out, eroding the materials around the pipe.

The state hired a contractor to dig out and replace the rotted pipe. The work cost about $400,000, McCarthy said.

In April, sinkholes opened up on Boniface Parkway and DeBarr Road in East Anchorage, McCarthy said. She said it happens more often in the spring or fall with heavy rain.

But McCarthy said the state expects sinkholes to develop more often as pipes age. The drainage in the Benson Boulevard area, for example, is more than three decades old, McCarthy said.

In the coming weeks, the state will work to assemble a plan to check the condition of the drain system, particularly the areas known to be old, McCarthy said. Cameras will be sent down to look at pipes and check for line breaks.

From there, the priority will be to identify and strategically fix the pipes that are in the worst shape, McCarthy said. While it's not cheap, it's more expensive to fix a pipe that has already failed, she said.

The city has been taking a similar approach. About a year ago, the Berkowitz administration signed a $250,000 contract with an Anchorage-based engineering firm to study the creation of a stormwater utility. Under that system, residents and businesses would receive a stormwater utility bill, like a water and sewage bill.

The money would be used to more systematically fix or upgrade failing pipes, and even buy land to create natural drainages, officials have said.

In recent months, the consultants have been checking drain conditions and identifying stormwater problem spots. Based on a preliminary review, officials believe a high percentage of the city's storm pipes are near failing or are already failing, Bockenstedt said.

Bockenstedt said the city hopes to evaluate about three-quarters of the total amount of pipes in the coming months. That information will be used to build a final proposal for a utility, he said.

If the city did ultimately create a utility, McCarthy said the state — contending with even older drains than the city — would want to be part of it.

Correction: A previous version of this story misstated Jason Bockenstedt's title. He is deputy chief of staff for Mayor Ethan Berkowitz, not deputy mayor.