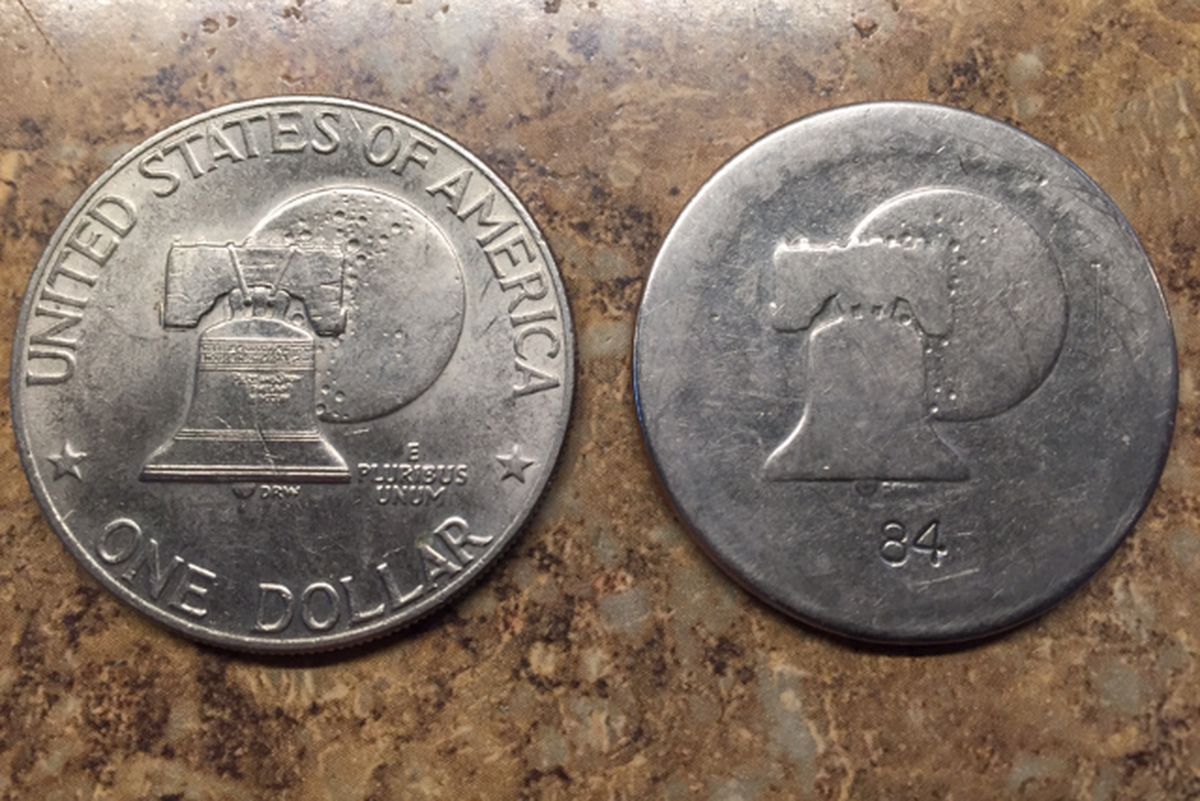 Gary Peters carried an Eisenhower dollar (right) in his pocket for 34 years. A newer coin (left) shows how much the coin has worn over the 34 years. Peters lost the coin, possibly in the Anchorage airport. (Photo provided by Gary Peters)

Gary Peters carried an Eisenhower dollar (right) in his pocket for 34 years. A newer coin (left) shows how much the coin has worn over the 34 years. Peters lost the coin, possibly in the Anchorage airport. (Photo provided by Gary Peters)

A California firearms instructor's search for a lucky coin missing at Anchorage's airport has left him grieving the loss.

It also made him — at least briefly — internet famous.

Gary Peters carried the Eisenhower dollar in his pocket every day for 34 years — ever since his daughter gave it to him when she was 5.

Worn smooth over the years and stamped with "84" for the year he got it, the coin accompanied Peters on more than 350 skydives.

He rubbed it before greeting customers when hard times forced him to take a job at a car dealership. It went along for a deep dive off Italy in 1991, on a search for the wreckage of a reconnaissance plane that became part of World War II legend.

And now it's gone.

"It feels almost like losing a family member or close friend," Peters said Thursday by phone. "I'm actually mourning. I know it sounds silly. … It's just like a piece of me."

A plea for information posted by his son-in-law on Reddit surged into viral status overnight Wednesday into Thursday.

At one point, the lost-coin post topped the popular discussion site's front page. It had been seen at least 607,000 times before an administrator took the post down.

Peters isn't on Reddit. He just hopes the attention helps.

He's offering a $500 reward, "no questions asked," to anyone who gets his beloved coin back to him.

Peters, 69, is an armory officer and firearms instructor for a California Department of Corrections and Rehabilitation prison in his hometown of Tehachapi.

He lost the coin en route to visit friends in Homer.

He and his girlfriend flew with another couple from California through Seattle to Anchorage.

Peters zipped the coin into the pocket of a carry-on bag before going through security screening. The bag stayed with him until he got to the Ravn Air counter in Anchorage, where it had to be checked because it was too big to carry on, he said.

Peters, who was traveling with firearms, was more concerned with filling out the proper paperwork than worrying about the coin. He'd traveled with it countless times before.

But when he got to Homer and unzipped the pocket, the coin was gone.

"I went through the bag like five times. And just totally panicked," he said. "I was in a bad way for a couple of days."

Peters printed 10 copies of a flyer with a photo of the coin and his handwritten plea for its return.

He asked Ravn agents to post the flyer in airport break rooms at Anchorage and Homer.

A Ravn spokeswoman said employees posted flyers and the company talked with staffers about the missing coin.

Peters said he sent Ravn an email saying he's not accusing "anybody of anything. It's possible it fell out on the ramp."

He couldn't bring himself to tell his now 39-year-old daughter, Kelli Oslie, that the coin was gone until Wednesday. He wrote her a text and included a photo of the flyer. Oslie was her usual encouraging self, he said: "She told me she loved me."

Then Oslie told her husband, Tyler Oslie. He posted the search for the coin to Reddit, where it exploded.

"When Gary reluctantly told his daughter (my wife) about losing the coin, reading the message broke both of our hearts," Tyler Oslie said in an email. "We knew how much that coin meant to him. He already went through so much effort to try to make flyers to give to the airport staff, that we felt we had to try something too."

Thousands of comments came in, some snarky but most positive.

Oslie said the family was "blown away" by the support, suggestions and good vibes.

Peters is still hoping for the best.

"I've had my ups and downs even with the coin," he said. "But it's been a source of comfort. It's kind of like having my daughter there."