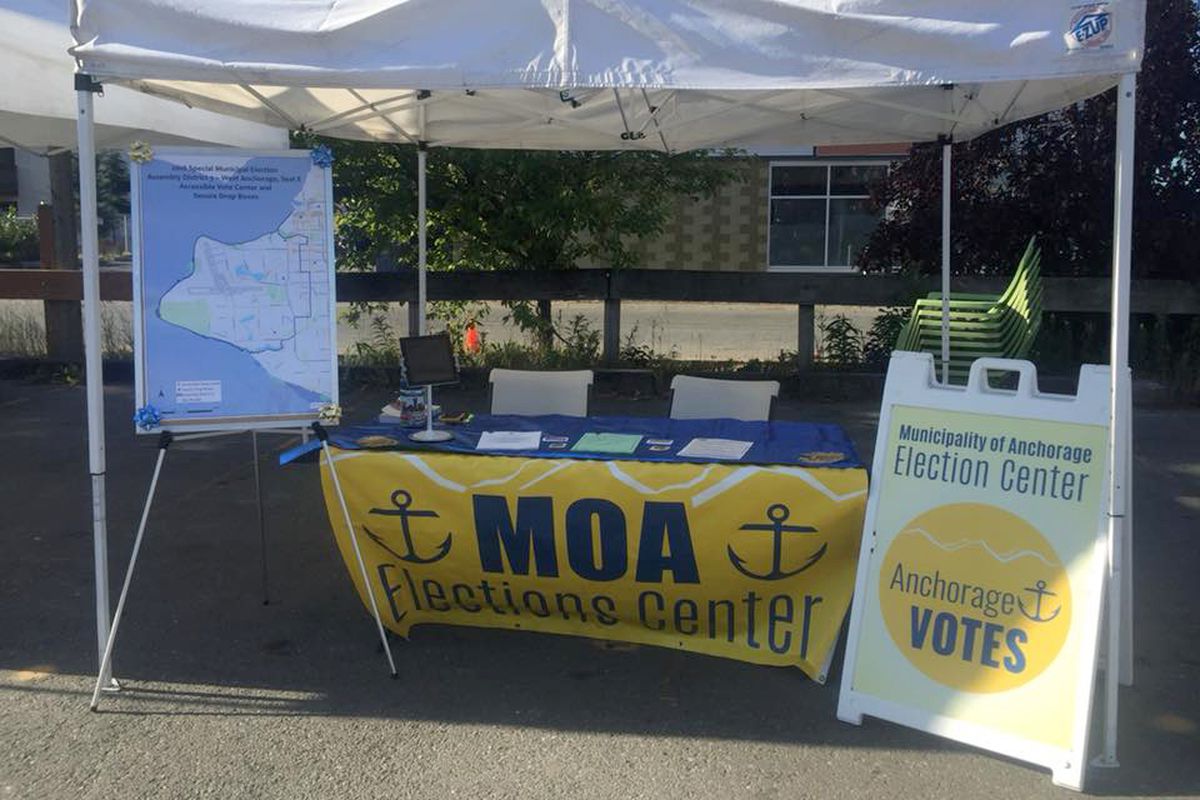 Elections officials had a booth at the Spenard Farmers Market for several Saturdays, trying to reach more voters for the Aug. 7 special election for the West Anchorage assembly seat. (Municipality of Anchorage)

Elections officials had a booth at the Spenard Farmers Market for several Saturdays, trying to reach more voters for the Aug. 7 special election for the West Anchorage assembly seat. (Municipality of Anchorage)

Anchorage elections officials are trying a few new tactics to drum up excitement about an unusual Anchorage Assembly election in West Anchorage this summer, including a farmers market booth and food trucks.

The last day to vote is Tuesday. So far, ballot returns were relatively slow, election officials said. As of Friday afternoon, turnout was hovering around 12 percent. Of about 42,000 registered voters, about 5,100 had returned ballot envelopes.

But officials were expecting a rush of last-minute ballots over the weekend. Ballots must be dropped off at secure drop boxes or an accessible vote center or postmarked by 8 p.m. on Tuesday, Election Day.

The special election was triggered unexpectedly in June when West Anchorage Assemblyman Tim Steele resigned for health reasons. The Assembly appointed Ira Perman, the executive director of the Atwood Foundation, to fill the seat until the new member is sworn in. The new member's term will end in 2020.

[Who is running in the special West Anchorage election?]

The West Anchorage Assembly district generally runs south of Westchester Lagoon, west of Arctic Boulevard down to Tudor Road, from C Street to 76th Avenue, and then from Minnesota Drive to West Dimond Boulevard and Campbell Lake.

Carolyn Hall, the education and outreach coordinator for city elections, said it's been a big challenge to get the word out. It's a time of year when there isn't normally an election, Hall said.

"And it's compounded by the fact that it's summer in Alaska and people are off camping, fishing, hiking and enjoying all the awesome things Alaskan summers provide," Hall said.

She said there's been limited staff and resources, and election workers are doing what they can. It didn't help that Facebook, which is often used for elections advertising, changed its policies for boosting advertisements, Hall said.

In hopes of reaching more voters, elections officials spent a few Saturdays behind a booth at the Spenard Farmers Market. That was something new, Hall said.

To try to make Election Day itself more fun, Hall arranged for two food trucks and a kombucha business to park outside of the city's election headquarters at 619 East Ship Creek Avenue.

The food trucks — offering Filipino fusion and comfort food — will be there between 11 a.m. and 3 p.m. on Tuesday, Hall said. She said anyone can drop by, pick up lunch and watch election workers process ballots inside. There will also be picnic tables set up out front, Hall said.

Several candidates spent the month of July waving signs, knocking on doors, posting on social media and sending out mail to try to gain attention.

For West Anchorage residents who are registered to vote: To vote by mail, mark the ballot and sign the security envelope.

Ballots need to be returned by 8 p.m. on Election Day at accessible vote centers or one of six drop boxes. The vote center is at the city's Ship Creek election headquarters. Voters can also request replacement ballots there.

If mailing the ballot Monday or Tuesday, play it safe and ask the postal official to hand-stamp or hand-cancel the postmark on the return envelope, Hall said. Use a first-class stamp.