Anchorage’s waste transfer hub is closing for upgrades. Officials say the city might need a new one. 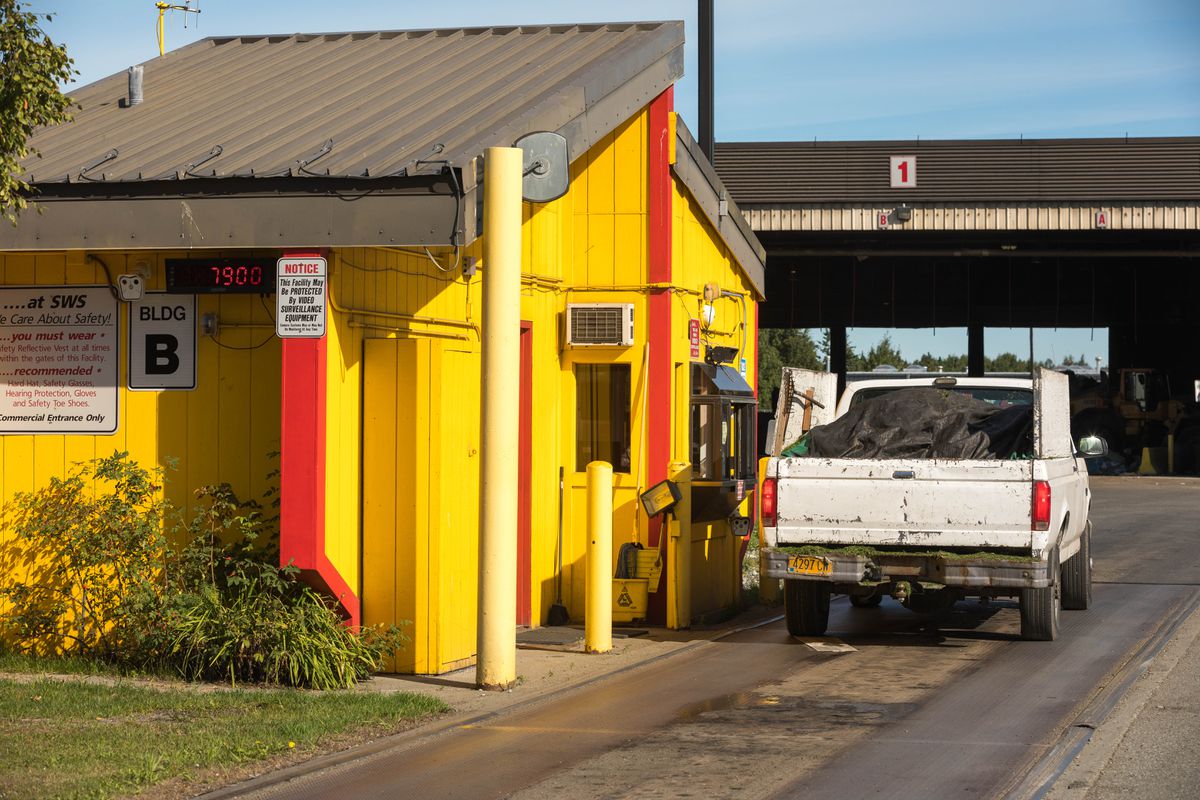 A truck is weighed as it goes into the Central Transfer Station on Friday. Solid Waste Services, which operates the transfer station, is closing for three weeks starting Aug. 14 for renovations. (Loren Holmes / ADN)

A truck is weighed as it goes into the Central Transfer Station on Friday. Solid Waste Services, which operates the transfer station, is closing for three weeks starting Aug. 14 for renovations. (Loren Holmes / ADN)

The place where Anchorage residents can drop off trash and junk to be taken to the landfill is about to shut down for three weeks for upgrades.

The Central Transfer Station, on East 54th Avenue off the Old Seward Highway, will be closed starting Tuesday. It is slated to reopen Sept. 4. Crews plan to replace weigh scales and the floor where trash passes through on its way to the landfill, which officials say are worn out.

During the closure, dump loads must be brought to the Anchorage Regional Landfill at 15500 E. Eagle River Loop Road in Eagle River.

Officials were warning that illegal dumping — leaving trash anywhere except for an authorized dumpster — could lead to a $300 fine.

The upcoming closure also signals a much larger, looming problem, utility officials say: Anchorage has outgrown the facility, which was built in 1975. Solid Waste Services, the trash utility that owns the transfer station, is studying whether to build a new one, said Suzanna Caldwell, spokeswoman for the utility.

More closures are expected in the future, lasting much longer than three weeks, Caldwell said.

"(The transfer station) is a site that was built for a much smaller city," Caldwell said. "Over the years, we've tried to put Band-Aids on it to make it work better."

The utility acquired property to the west decades ago that helped ease traffic issues, Caldwell said. But there are still two-hour waits, at times, to get into the dump on a Saturday, she said.

The upcoming fixes at the Central Transfer Station add up to about $900,000, paid through dump fees and other customer costs, Caldwell said.

One key piece of equipment being replaced is known as the "tipping floor," the concrete slab where residents and commercial operators drop off trash out of vehicles. Loaders push the trash from the tipping floor into transfer trucks. About 40 million pounds of garbage passes over the tipping floor every month on its way to the landfill.

The tipping floor was installed in 1999. The transfer station has had closures every few years to allow for patch upgrades to the floor, Caldwell said. In 2015, a study found that up to 5 inches of the 8-inch floor had worn away, according to Caldwell.

Meanwhile, commercial scales, which weigh dump loads, were last replaced in the 1990s and have seen "significant wear," according to Caldwell.

She also said there are safety concerns on the commercial side of the transfer station, where there is no barrier between heavy equipment and the trash drop-off point.

In September, the utility signed a contract with Tetra Tech, a Pasadena, California-based consulting firm, to work on a master plan that would include capital improvements and new practices and programs. The contract runs up to $514,533 for a year of services, according to documents approved by the Anchorage Assembly.

The options recommended by the consultant may include building a new transfer station elsewhere in town, Caldwell said.

Caldwell said those plans will be made public in early 2019.